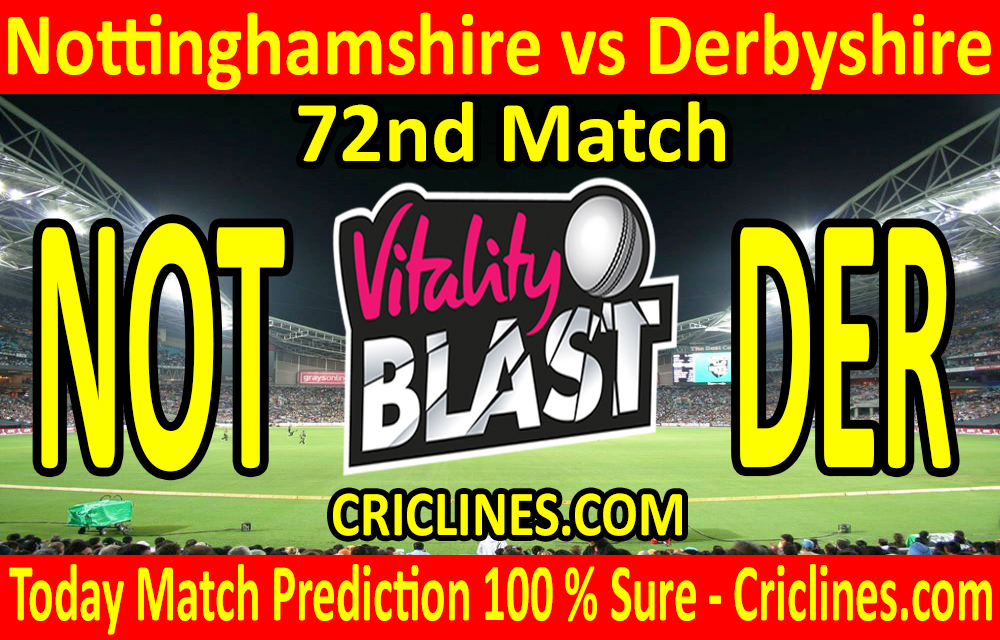 The world is ready to witness yet another big battle of Vitality T20 Blast. The 72nd Match of Vitality T20 Blast 2020 is scheduled to play between Nottinghamshire and Derbyshire on Thursday, 17th September 2020 at Trent Bridge, Nottingham. We are posting safe, accurate, and secure today match prediction for all matches of T20 Blast free.

Nottinghamshire had an outstanding performance in this tournament. They are the top-performing team of the North Group. They had played a total of seven matches so far with five wins to their name. Their two matches were ended with no result and they are leading the points table of the north group. They are coming to this match on the back of a massive win over Derbyshire in their previous match with the margin of 13 runs. They won the toss and decided to bat first. The performance of their batting order was outstanding. They put a total of 198 runs in their inning of 20 overs. Almost all batsmen from their side put some runs on the board. Joe Clarke was the most successful and highest run-scorer from their side who scored 57 runs on just 35 deliveries with the help of six boundaries and two sixes. Alex Hales also had an outstanding performance with the bat. He scored 49 runs on 32 deliveries with the help of nine boundaries. Tom Moores scored 31 runs in the previous match.

Derbyshire had almost failed to give their best performance in this season of T20 Blast. This is the worst performing team of the North Group. They had played a total of eight matches so far with just one win to their name. They had lost five matches while their two matches were ended with no result. They are laying at the bottom of the points table of the North Group. They won their most recent match against Leicestershire with the margin of just four runs. They won the toss and decided to bat first. The performance of their batting was not impressive. They scored a total of 147 runs in their inning of 20 overs. The skipper, B Godleman was the highest run-scorer from their side who scored 34 runs on 36 deliveries with the help of two boundaries and one six. W Madsen scored 33 runs while Alex Hughes had 25 runs to his name.

The 72nd Match of Vitality T20 Blast is going to be played at Trent Bridge, Nottingham. The pitch here at this stadium is expected to be flat and much favored for batting. It has a decent amount of pace and bounces in it. We may have some high scoring matches here. The pitch may also have some help in it for the seamers.

Check out the Dream11 fantasy prediction for the 72nd Match of the finals day in Vitality T20 Blast, between Nottinghamshire and Derbyshire.

NOT vs DER DREAM11 LINEUP