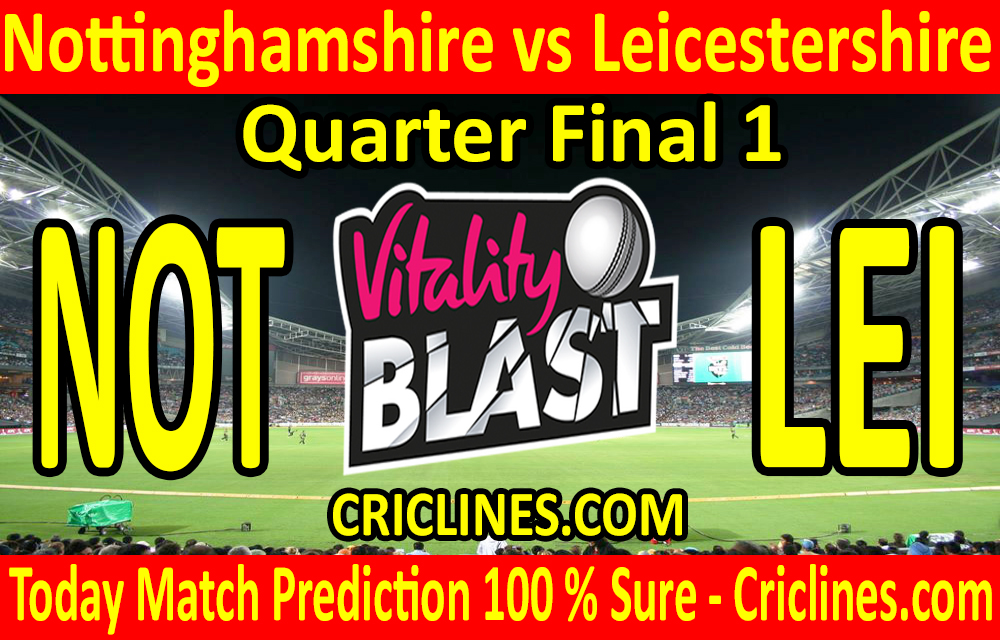 The world is ready to witness yet another big battle of Vitality T20 Blast. The Quarter Final 1 of Vitality T20 Blast 2020 is scheduled to play between Nottinghamshire and Leicestershire on Thursday, 1st October 2020 at Trent Bridge, Nottingham. We are posting safe, accurate, and secure today match prediction for all matches of T20 Blast free.

Nottinghamshire had performed well in this edition of the Vitality T20 Blast. They had are the best performing team of the North Group. They had played a total of 10 matches at the league stage with seven wins to their name. They lost just one match while their two matches were ended with no result. They are leading the points table of the North Group. They won their most recent match against Durham with a margin of 18 runs. They lost the toss and were asked to bat first. The performing of their batting order average in this match. They scored a total of 150 runs in their inning of 20 overs. Duckett scored 29 runs while Imad Wasim scored 26 runs and remained not out till the end of their inning. Tom Moores scored 24 runs while Joe Clarke had 22 runs to his name. Nottinghamshire won the previous match due to the best performance by their batting order. They defended the target of 151 runs and leaked 132 runs in their 20 overs inning. Almost all bowlers from their side performed well in that match. Imad Wasim and Jake Ball picked two wickets each while Matthew Carter, Samit Patel, Steven Mullaney, and the skipper, Daniel Christian were the bowlers who picked one wicket each in the previous match.

The performance of Leicestershire had not been impressive in this tournament. Like all other teams, they also had played a total of 10 matches with just four wins to their name. They had lost three matches while their three matches were ended with no result. They are holding the 3rd position on the points table of the North Group. They were beaten by Lancashire in their most recent match with a margin of 22 runs. They won the toss and decided to bat first. The performance of their batting order was good in the previous match. They scored a total of 154 runs in their inning of 20 overs. A Lilley scored 49 runs while Nick Welch scored 43 runs. The skipper, Ackermann had 29 runs to his name. The performance of the bowling unit of Leicestershire was outstanding in the previous match. They defended the target of 155 runs and leaked 132 runs in their inning of 20 overs. The skipper, Colin Ackermann was the highest wicket-taker from their side who picked three wickets in his four overs bowled out against just 18 runs. Dieter Klein and Gavin Griffiths picked one wicket each.

The Quarter Final 1 of Vitality T20 Blast is going to be played at Trent Bridge, Nottingham. The pitch here at this stadium is expected to be flat and much favored for batting. It has a decent amount of pace and bounces in it. We may have some high scoring matches here. The pitch may also have some help in it for the seamers.

Check out the Dream11 fantasy prediction for the Quarter Final 1 of the finals day in Vitality T20 Blast, between Nottinghamshire and Leicestershire.

NOT vs LEI DREAM11 LINEUP