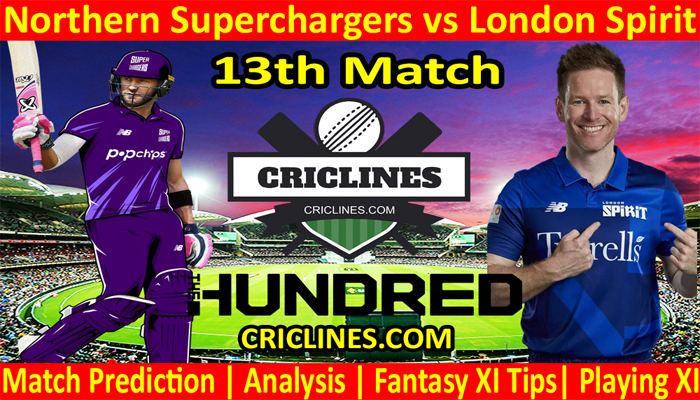 The performance of Northern Superchargers had not been impressive in this tournament. They had played three matches so far with just one win to their name. They had lost two matches and are situated at the fifth position on the points table. On the other side, London Spirit is a strong team and they had been good in this edition of The Hundred League 2022. They are the unbeaten team of this tournament as they had won their all three matches played till now and are leading the points table of The Hundred League 2022.

Northern Superchargers won their very first match of The Hundred League but now had lost two matches in a row. They had lost the recent match against Oval Invincibles and earlier, they were beaten by Trent Rockets where the batting order of this team failed to put a handsome total on the board and they scored 152 runs in their 100 balls inning. David Wiese was the highest run-scorer from their side who scored 50 runs on 27 balls with the help of two boundaries and five huge sixes. van der Merwe also performed well and scored 30 runs while Michael Pepper scored 15 runs. A Lyth and FAF du Plessis failed to open the account on the scoreboard and went back to the pavilion without scoring any run.

DJ Bravo scored 19 runs in the previous match. The bowling department of Northern Superchargers also failed to give the best performance. They leaked the target of 153 runs in 94 balls. Matty Potts, David Wiese, Roelof van der Merwe, Dwayne Bravo, Ben Raine, and Adil Rashid are the leading bowlers of Northern Superchargers. Adil Rashid, Ben Raine, and Dwayne Bravo picked one wicket each while no other bowler from their side could manage to pick any wicket. After losing two matches in a row, we can expect that NSG will put their full strength in this match and they also have the ability to win this match but cricket prediction of this match is not favoring this.

London Spirit had been just superb in this edition of The Hundred League. They had beaten Oval Invincibles, Manchester Originals, and Southern Brave. They won their previous match against Manchester Originals with a big margin of 52 runs. The performance of their batting order was good but not very impressive where they scored 160 runs in their 100 balls inning. Zak Crawley and A Rossington are opening the batting inning for London Spirit with Glenn Maxwell, Eoin Morgan, Kieron Pollard, and J Thompson available to handle the middle and lower batting order. Zak Crawley was the highest run-scorer from their side with 41 runs to his name in 34 balls with the help of three boundaries and two huge sixes. The skipper, Eoin Morgan also performed well and scored 37 runs.

Kieron Pollard was also good in the previous match where he scored 34 runs and remained not out. He faced just 11 balls and smashed one boundary and four huge sixes. Glenn Maxwell scored 21 runs. The way how the bowling department of London Spirit performed in the previous match was just outstanding. They defended the target of 161 runs and leaked 108 balls and send the full team of Manchester Originals back to the pavilion in 98 balls. Chris Wood, Liam Dawson, Jordan Thompson, Nathan Ellis, and Mason Crane are the leading bowlers of LNS and these all bowlers performed well in the previous match. Jordan Thompson was the most successful bowler who picked four wickets in 20 balls against 21 balls. Liam Dawson and Mason Crane picked two wickets each while Chris Wood had one wicket to his name. Will LNS register its fourth win in a row? the time will tell us.

London Spirit is overall a strong team as compared to the Northern Superchargers at least on papers. According to The Hundred prediction, London Spirit is the favorite team who will win this match. There are many factors that make Northern Superchargers a favorite team to win this match. Some of the key factors are mentioned as under:

London Spirit is full of experienced and young players of the t20 format. The batting order of this team is also strong and some well-known hitters of the t20 format are part of the squad of this team, so the winning chances of today match for the London Spirit have been increased. The equation of who will win today’s cricket match prediction and who will win the cricket match today is mentioned as under.

The 13th Match match of The Hundred League 2022 is going to be held at Headingley, Leeds. We had observed in the previous matches played here that the pitch here at this venue is good for batting. The track is slower than the others we have seen and helps the spinners quite a bit. We are hoping that the surface is bound to get slower and be a bit more difficult for batting in this match. A score of 185 is going to be tough to chase.

Who Will Win Northern Superchargers vs London Spirit, 13th Match The Hundred League-2022

We had provided you with the above-mentioned match prediction on the basis of our research, understanding, and analysis. You can consider the point we had provided you and the final decision will be yours that you have to make at your own risk.