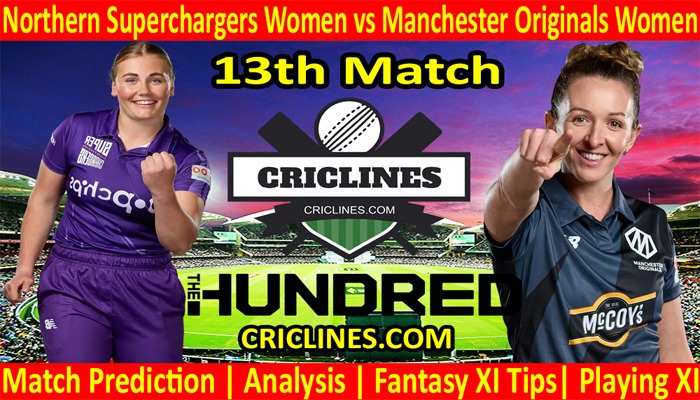 The world is ready to witness yet another big battle of Women’s cricket. The 13th Match of The Hundred Women’s Competition 2022 is scheduled to play between Northern Superchargers Women and Manchester Originals Women on Sunday, 21st August 2022 at Headingley, Leeds. We are posting safe, accurate, and 100% secure today match prediction of The Hundred League 2022 free.

The performance of Northern Superchargers Women had not been impressive in this edition of The Hundred Women League. They had played three matches and had won just one match. They had lost two matches and are holding the sixth position on the points table. They were beaten by Birmingham Phoenix Women in their most recent match by the margin of just five runs. The performance of their bowling unit was very impressive where they leaked 153 runs in their 100 balls inning. Lucy Higham, Langston, Davidson Richards, Smith, J Gunn, Katie Levick, and Armitage are the leading bowlers of this team. Davidson Richards was the most successful and highest wicket-taker from their side who picked three wickets in her 20 balls against 30 runs.

Katie Levick picked one wicket while no other bowler from their side could not manage to pick any wicket. Northern Superchargers Women lost the previous match due to the worst performance by their batting order. They failed to chase the target of 154 runs and scored 148 runs in their 100 balls inning. Alyssa Healy and Gaby Lewis are leading the batting order of NSGW vs with Laura Wolvaardt, Bess Heath, Hollie Armitage, Alice Davidson Richards, and Jenny Gunn available to handle the middle and lower batting order. Alyssa Healy was the most successful and highest run-scorer from their side who scored 48 runs on 28 balls with the help of seven boundaries and one huge six. Laura Wolvaardt scored 32 runs while the skipper, Hollie Armitage had 31 runs to her name. They had not performed well but match prediction of this match is in the favor that NSGW will win the match.

Manchester Originals Women are the other team that had not performed well in this tournament. They also had played three matches with just one win to their name. They had lost two matches and are holding the 5th position on the points table. Their most recent match against Southern Brave Women was very interesting where they lost the match by the margin of nine runs. The way how their bowling unit performed in the previous match was just outstanding. They leaked 136 runs in their 100 balls inning. Lea Tahuhu, Kate Cross, Grace Potts, Sophie Ecclestone, Emma Lamb, Deandra Dottin, and Hannah Jones are taking care of the bowling department of MOSW.

Sophie Ecclestone was the most successful and highest wicket-taker from their side who picked two wickets in her 20 balls against 32 runs. Hannah Jones and the skipper, Kate Cross picked one wicket each. Manchester Originals Women lost the previous match due to the worst performance by their batting order. They could manage to score 127 runs while chasing the target of 137 runs. They had a good opening start and scored 46 runs for the partnership of the first wicket but after losing the second wicket, their remaining batting order almost collapsed. Emma Lamb was the most successful and highest run-scorer from their side who scored 57 runs on 45 balls with the help of four boundaries and one huge six. Lizelle Lee also performed well and scored 25 runs while Deandra Dottin had 12 runs to her name. No other batter from their side could even enter into the double figure.

Northern Superchargers Women is full of experienced and young players of the t20 format. The batting order of this team is also strong and some well-known hitters of the t20 format are part of the squad of this team, so the winning chances of today match for Northern Superchargers Women have been increased. The equation of who will win today’s cricket match prediction and who will win the cricket match today is mentioned as under.

The 13th Match of The Hundred Women’s Competition 2022 is going to be held at the Headingley, Leeds. We had observed in the previous matches played here that the pitch here at this venue is good for batting. The track is slower than the others we have seen and helps the spinners quite a bit. We are hoping that the surface is bound to get slower and be a bit more difficult for batting in this match. A score of 180 is going to be tough to chase.

The weather forecast for Leeds is good for this cricket match. There are almost no chances of rain in the region and we are hopeful that we will have a full match to enjoy.

Dream11 fantasy team lineup prediction for Northern Superchargers Women vs Manchester Originals Women 13th Match The Hundred Women’s Competition 2022. After checking the latest player’s availability, which players will be part of both teams, the possible tactics that the two teams might use as we had learned from previous seasons of The Hundred Women’s Competition 2022 to make the best possible Dream11 team.