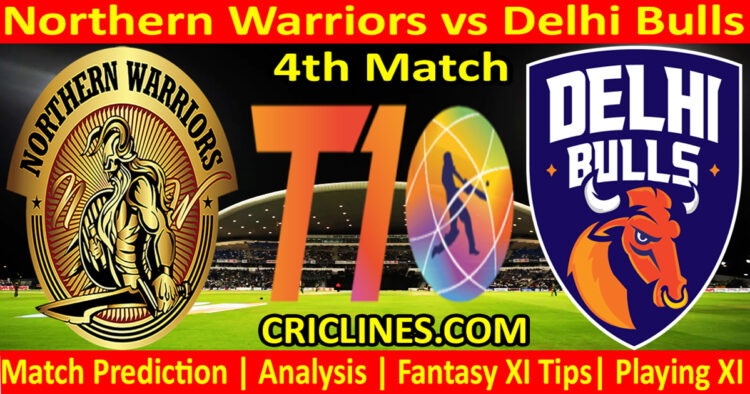 Northern Warriors totally failed to give the best performance in the previous edition of the Abu Dhabi T10 League. They could manage to win just two out of ten league matches. They lost eight matches and were laying in the second position from the bottom of the table. They are coming to this tournament with some major changes in their management and squad. Will these change the fate of the Warriors? we will see this in this tournament.

Delhi Bulls were the second-best performing and runner-up team of the previous edition of the Abu Dhabi T10 League. They also played ten league matches where they lost just three matches. They won ten matches and were holding the second position on the ladder when the league matches were completed. They beat Team Abu Dhabi in the Qualifier 2 match and made their way to the final where they were beaten by Deccan Gladiators.

Andy Flower is the new head coach of Northern Warriors for this season of the Abu Dhabi T10 League and we are sure that he will guide his team in a professional way. Northern Warriors struggled in the previous season of this tournament and they had not picked some best batters for this season. They had focused to pick the best bowlers and all-rounders but no hard hitter batter is part of the squad of this team. Rovman Powell had been appointed as the new captain of the Warriors and he will also be leading the batting order with Adam Lyth and Adam Hose. Northern Warriors had picked the best all-rounders of the shorter format of cricket.

Sherfane Rutherford is the batting all-rounder in the squad of Northern Warriors while Kennar Lewis and Hamdan Tahir are wicketkeeper batters in this team. Northern Warriors are rich in the bowling department and they had some best full-time bowlers and some bowling all-rounders. Liam Dawson, Wanindu Hasaranga, Wayne Parnell, Chris Green, Rayad Emrit, and Isuru Udana are bowling all-rounders in the squad of the Warriors. Gus Atkinson and Junaid Siddique are regular bowlers on this team. We don’t think that the batting order of Northern Warriors is much stronger than the other teams in this tournament and they will face a lot of issues but they have a strong and experienced bowling unit that can give a tough time to other teams.

Delhi Bulls performed well in the previous edition of the Abu Dhabi T10 League but failed to win the title and were the runner-up team and they had made some unexpected changes and we think that they are one of the strongest contenders for the title of this season of Abu Dhabi T10 League. Mushtaq Ahmed is a legend cricket of in Pakistan and had been the coach of different international teams. He is the new head coach of the Bulls. Dwayne Bravo is the new leader of the Delhi Bulls in this tournament. He is a batting all-rounder and can bowl well in the middle overs. The batting order of the Bulls is also strong. Rilee Rossouw and Najibullah Zadran are key batters of this team.

Delhi Bulls has some best batting all-rounders in their squad. Tim David and Will Jacks are the best all-rounders of the shorter format of cricket and these batters are part of the squad of this side. Rahmanullah Gurbaz and Jordan Cox are wicketkeeper batters in their squad. The bowling unit of Delhi Bulls is also strong and experienced at least on paper. Keemo Paul, Mitchell Stanley, and Imad Wasim are bowling all-rounders in their squad. Imad Wasim had been just outstanding in the recent season of the Caribbean Premier League and had also played a lot of cricket in the conditions of Abu Dhabi. We are sure that he will play the main role in each and every match for the Bulls. Fazalhaq Farooqi, Dominic Drakes, Richard Gleeson, Tom Banton, Harbhajan Singh, Rahkeem Cornwall, and Waqas Maqsood are the leading bowlers of this team.

The 4th Match of the T10 League is going to be played at Sheikh Zayed Stadium, Abu Dhabi. This venue has one of the flattest and completely dead tracks we have seen in the past. We are expecting a slow, flat, and good for batting surface for this match. A score of more than 120 runs should be a par score.

Dwayne Bravo, Rahmanullah Gurbaz, and Wanindu Hasaranga are key players to watch in this match.

The dream11 team prediction for Northern Warriors vs Delhi Bulls 4th Match T10 League. After checking the latest player’s availability, which players will be part of both teams, the possible tactics that the two teams might use as we had learned from previous seasons of Abu Dhabi T10 League to make the best possible Dream11 team.

We had provided you with the above-mentioned T10 Prediction on the basis of our research, understanding, and analysis. These prediction tips have also based on the reports which we have from our different sources. You can consider the point we had provided you and the decision will be yours that you have to make.