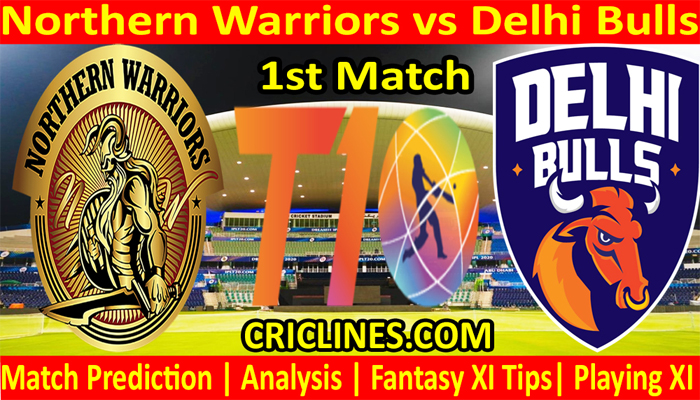 The cricket fans are ready to witness yet another big battle of the Abu Dhabi T10 League. The 1st match of the T10 League is scheduled to play between Northern Warriors and Delhi Bulls on Friday, 19th November 2021 at Sheikh Zayed Stadium, Abu Dhabi. We are posting a safe, accurate, and secure today match prediction of Abu Dhabi T10 League free.

The most recent edition of the Abu Dhabi T10 League was played in January this year where eight teams participated. The teams were divided into two groups. But this season, the format is different and teams also had been reduced to six but the number of matches had been increased. Now, a total of 35 T10 matches will be played in this tournament. Qalandars, Maratha Arabians, and Pune Devils are not part of this season while The Chennai Braves is a new team that is going to play in Abu Dhabi T10 League for the first time.

Northern Warriors are the title winners of the previous edition of the Abu Dhabi T10 League. They beat the same team, Delhi Bulls in the final with a margin of eight wickets, and now they will be defending their title. There are a number of changes in the squad of Northern Warriors than it was in the previous season. Rovman Powell is going to lead this team in this tournament. The batting order of this team is strong and experienced at least on papers.

Rovman Powell, Upul Tharanga, Kennar Lewis, and Rameez Shahzad are the key batters of Northern Warriors. Some best batting all-rounders of the shorter format of cricket like Moeen Ali, Samit Patel, Ross Whiteley, and Rayad Emrit are also part of this team. T10 is the format where all teams need a good and attacking bowling department. Northern Warriors had some attacking bowlers in their squad. Chris Jordan, Imran Tahir, Joshua Little, Umair Ali, and Mark Watt are the leading bowlers of the Warriors.

The batting order of the Delhi Bulls has a lot of experienced and hard hitters. Jason Roy, Eoin Morgan, Rilee Rossouw, Sohaib Maqsood, and Hafeez ur Rehman are the leading batters of this team. Delhi Bulls also have some best batting all-rounders like Sherfane Rutherford, Mohammad Hafeez, Gulbadin Naib, and Luke Wright are in their squad. Dwayne Bravo is going to lead Delhi Bulls in this tournament. The bowling department of Delhi Bulls is good but not strong as their batting order. Ravi Rampaul, Adil Rashid, Nyeem Young, Romario Shepherd, and Akeal Hosein are the key bowlers of the Delhi Bulls.

The 1st match of the T10 League is going to be played at Sheikh Zayed Stadium, Abu Dhabi. This venue has one of the flattest and completely dead tracks we have seen in the past. We are expecting a slow, flat, and good batting surface for this match. A score of more than 120 runs should be a par score.

The weather forecast for Abe Dhabi is almost good for this cricket match. There are no chances of rain and dust storms and we are hoping that the weather will be clear during all matches of today.

Imran Tahir, Jason Roy, and Adil Rashid are key players to watch in this match.

The dream11 team prediction for Northern Warriors vs Delhi Bulls 1st match T10 League. After checking the latest player’s availability, which players will be part of both teams, he possible tactics that the two teams might use as we had learned from previous seasons of T10 League to make the best possible Dream11 team.