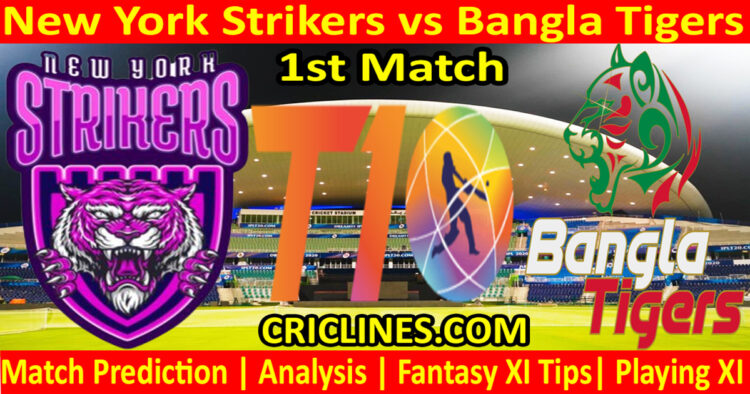 The sixth season of the Abu Dhabi T10 League is all set to get a kick start on November 23, 2022, and a total of 33 T10 matches will be played between eight teams. Two new teams had been added to Abu Dhabi T10 League while some teams also had left the tournament. New York Strikers and Morrisville SAMP Army are two new additions to this tournament.

New York Strikers is a new addition to this season of the Abu Dhabi T10 league. This is a cricket club which is situated in New York, United States, and is going to play in an international event for the first time. This is a big opportunity for this team to get some experience as they will play against the strong and experienced players of the world.

Bangla Tigers had been part of the Abu Dhabi T10 League since some previous editions. They were holding the fourth position on the ladder in the previous match after the league matches were completed. They played ten league matches with six wins to their name. They lost four matches and were holding the fourth position on the table. They were beaten by Team Abu Dhabi in the eliminator match.

New York Strikers had appointed Aftab Ahmed as their head coach for their first edition of the Abu Dhabi T10 League. They had hired the best players for the shorter format of cricket and we are sure that they will give a tough time to the other teams in this tournament. Kieron Pollard is well known and experienced player of T20 cricket and he will be leading the Strikers in this tournament. The batting order of this team is also strong and experienced. Azam Khan will open the batting inning for New York Strikers. He had recently played in CPL T20 and had played the main role. We are expecting that he will prove their main batter.

Eoin Morgan, Paul Stirling, and Romario Shepherd are other dangerous batters in the squad of New York Strikers. Eoin Morgan had led England in a lot of T20 matches and has a lot of experience. We think that he will be opening the batting inning for New York Strikers with Azam Khan. The bowling unit of this team is also experienced. Wahab Riaz is an experienced bowler of the shorter format of cricket while Muhammad Waseem had been the part of Pakistan team in the recently played T20 World Cup and he also performed well. Andre Fletcher and Kesrick Williams are two other experienced bowlers while Muhammad Farooq from Afghanistan is also part of the bowling squad of this team. Akeal Hosein, Ravi Rampaul, and Stuart Binny can also be used as bowlers.

Bangla Tigers were good but not the best in the previous season of the Abu Dhabi T10 League. They had made a lot of changes in their squad for the sixth edition of this tournament. Dougie Brown is the head coach of this team while Shakib Al Hasan had been appointed as the new captain of the Tigers. The top batting order of the team is dangerous and we think that Hazratullah Zazai and Colin Munro will open the batting inning for this team. Iftikhar Ahmed is also part of the batting squad of the Tigers. He had played in ICC T20 World Cup for Pakistan and played a major role in the batting order of Pakistan. He had played a lot of cricket in Abu Dhabi and we think that he will play a main role for the Tigers.

Joe Clarke, Benny Howell, and Ben Cutting are available to handle the middle batting order of this team. Bangla Tigers are very rich in the bowling department. Mohammad Amir will be leading the bowling unit on this side. He had been just outstanding in the recent season of CPL T20 and also had a lot of experience playing in Abu Dhabi. Dan Christian, Jake Ball, and Lewis Gregory are other experienced bowlers on this team. Nurul Hasan had played a lot of T20 cricket for Bangladesh and we are sure that he will play the main role for Bangla Tigers. Rohan Mustafa and Chirag Suri had been the part of the national team of Abu Dhabi and they are also playing at their home ground. We are expecting that these local guys will be the main players of this team.

The 1st Match of the T10 League is going to be played at Sheikh Zayed Stadium, Abu Dhabi. This venue has one of the flattest and completely dead tracks we have seen in the past. We are expecting a slow, flat, and good batting surface for this match. A score of more than 120 runs should be a par score.

The weather forecast for Abe Dhabi is almost good for this cricket match. We don’t think that there are any chances of rain and we are sure of a full match to enjoy.

Azam Khan, Mohammad Amir, and Kieron Pollard are key players to watch in this match.

The dream11 team prediction for New York Strikers vs Bangla Tigers 1st Match T10 League. After checking the latest player’s availability, which players will be part of both teams, and the possible tactics that the two teams might use as we had learned from previous seasons of T10 League to make the best possible Dream11 team.