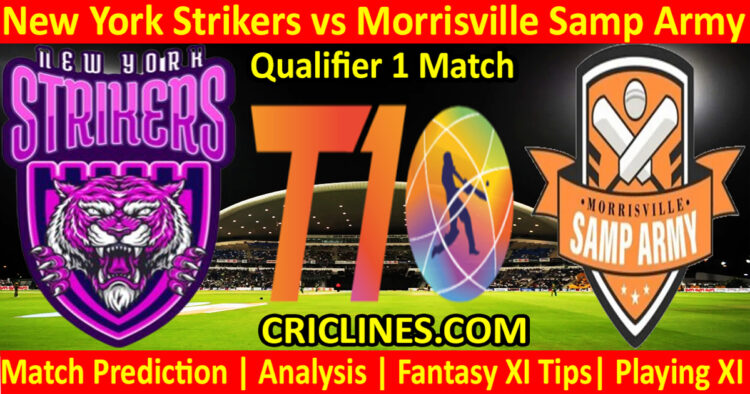 The league matches of the Abu Dhabi T10 League are completed and we are in playoff matches. New York Strikers and Morrisville Samp Army are the best-performing teams in this tournament. Remember that the winner of this match will qualify for the final while the loser will face the winner of the eliminator match in qualifier 2. New York Strikers are leading the ladder of this tournament right now. They had won six out of seven league matches.

Morrisville Samp Army is the other team that had been just outstanding in this tournament. They are the second-best-performing team of this season in the Abu Dhabi T10 League. They had played seven league matches with five wins to their name. They had lost two matches and are holding the second position on the points table.

New York Strikers had won their previous match against Team Abu Dhabi with a handsome margin of seven wickets where they won the toss and decided to field first. The way how their bowling unit performed in the previous match was just outstanding. They leaked 78 runs in 10 overs. Wahab Riaz was the most successful and highest wicket-taker from their side who picked three wickets in two overs against just four runs. Rashid Khan also had an outstanding performance with the ball and picked up two wickets in two overs while he was charged for 12 runs.

Tom Hartley was the other bowler with two wickets to his name in two overs against 19 runs. J Thompson picked one wicket while Akeal Hosein was the only bowler who failed to pick any wicket in the previous match. The batting order of New York Strikers also performed well and chased the target of 79 runs in 7.3 overs. Muhammad Waseem was the most successful and highest run-scorer from their side who remained not out after scoring 45 runs on 20 balls with the help of two boundaries and five huge sixes. Eoin Morgan was the other batter who put some runs on the board. He scored 15 balls the same balls and smashed two boundaries during his inning.

Morrisville Samp Army had beaten in their most recent match against Northern Warriors with a big margin of five wickets. They lost the toss and were asked to field first. The performance of their bowling unit was average. They leaked 117 runs in 10 overs. They used six bowlers and Karim Janat was the most successful bowler from their side with one wicket to his name in two overs against 21 runs. Dwaine Pretorius also performed well and picked one wicket in two overs while he was charged with 22 runs. M Theekshana and Sheldon Cottrell picked one wicket each while C Karunaratne and Ahmed Raza were the bowlers who failed to pick any wicket.

The batting order of Morrisville Samp Army also performed well and chased the target of 118 runs in 8.3 overs. Shimron Hetmyer was the most successful and highest run-scorer from their side scoring 45 runs on just 18 balls with the help of two boundaries and five huge sixes. Karim Janat also had an outstanding performance with the bat and put some runs on the board. He scored 25 runs while he faced 13 balls and smashed three boundaries during his inning. Dwaine Pretorius also had a superb performance with the bat and remained not out after scoring 17 runs on just seven balls. He smashed one boundary and the same huge six. David Miller, Moeen Ali, and Johnson Charles failed to open the account on the scoreboard.

The Qualifier 1 Match of the T10 League is going to be played at Sheikh Zayed Stadium, Abu Dhabi. This venue has one of the flattest and completely dead tracks we have seen in the past. We are expecting for a slow, flat, and good for batting surface for this match. A score of more than 120 runs should be a par score.

Shimron Hetmyer, Wahab Riaz, and Rashid Khan are key players to watch in this match.

The dream11 team prediction for New York Strikers vs Morrisville Samp Army Qualifier 1 Match T10 League. After checking the latest player’s availability, which players will be part of both teams, and the possible tactics that the two teams might use as we had learned from previous seasons of Abu Dhabi T10 League to make the best possible Dream11 team.

We had provided you with the above-mentioned T10 Prediction on the basis of our research, understanding, and analysis. These prediction tips have also based on the reports which we have from our different sources. You can consider the point we had provided you and the decision will be yours that you have to make.