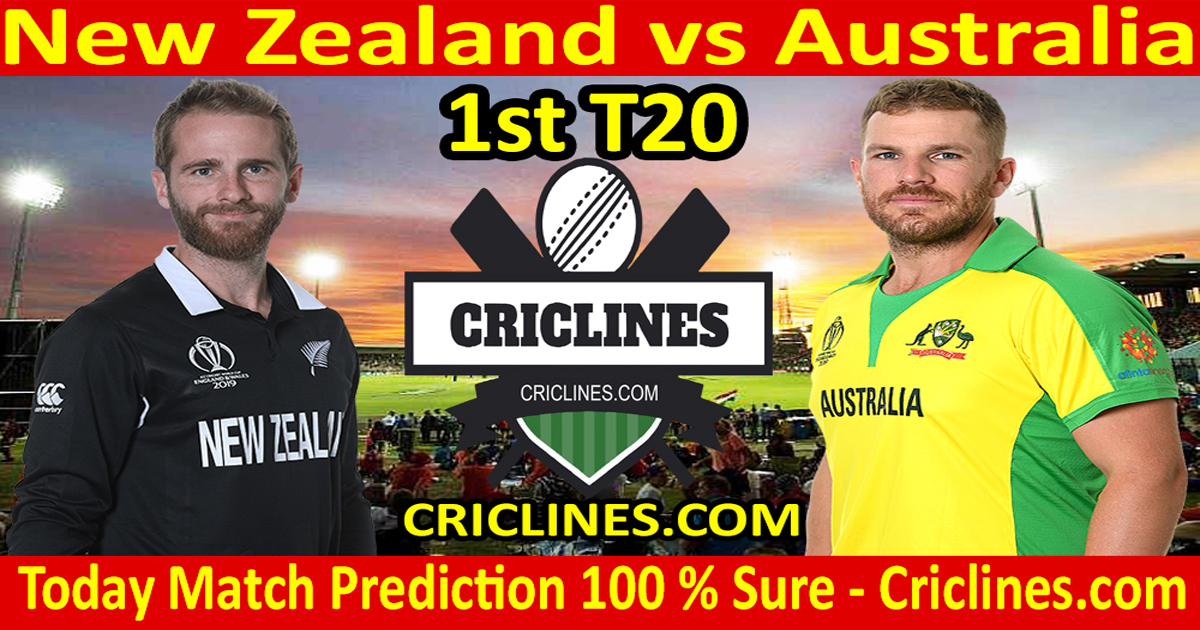 The cricket fans are ready to witness yet another big battle of the T20 cricket. The 1st T20 match of Australia tour of New Zealand, 2021 is scheduled to be held on Monday, 22nd February 2021 at Hagley Oval, Christchurch. We are posting safe, secure, and accurate today match prediction of all matches of Australia and New Zealand.

New Zealand had recently won a t20 series against Pakistan. This team has a decent record while playing in the home conditions. Most players of New Zealand are in good form as they had recently performed in the Super Smash League. There were some concerns while selecting the final squad for this series against Australia. We don’t think that Martin Guptill will be part of the final eleven for this match and Finn Allen is going to replace him. New Zealand is a very rich and experienced team when it comes to the t20 format.

Kane Williamson is a well-known player of the t20 format and has a decent record. Devon Conway, Glenn Phillips, Tim Seifert, and Jimmy Neesham are the batting who will be taking care of the batting order of New Zealand. It shows that New Zealand has firepower in batting. Scott Kuggeleijn, Kyle Jamieson, and Tim Southee have the ability to bat in the last overs. Like the batting, the bowling unit of New Zealand is also strong and experienced. A total of six bowlers are part of the squad of this team. Ish Sodhi, Trent Boult, and Tim Southee are the key bowlers for New Zealand.

Australia had been busy in cricket after the restoration of the game after the pandemic. They had recently played a t20 series against India and their key players were also busy in the Big Bash League. This team had given a chance of a couple of new players in the national squad for this team. Jhye Richardson, Josh Phillipe, and Riley Meredith had a chance to prove themselves in international cricket. The squad of Australia is strong as compared to the squad that visited India. David Warner is not part of the squad for Australia they will have to chase the new openers.

Aaron Finch had failed to give his best performance in the recent season of the Big Bash League and he had to perform in this series against New Zealand. Australia has some experience in batting but there is no experience in bowling as Pat Cummins, Mitchell Starc, or Josh Hazlewood are not in the squad for this match. Andrew Tye and Adam Zampa have to take the responsibility with Ashton Agar are also available for the selection.

Australia had played a total of 131 T20 matches where they won 69 and Opposing teams won 59 matches. Their three matches were ended with no result.

New Zealand had played 137 T20 matches. They won 66 matches while opposing teams won 67 matches. Their four matches were ended without any result.

The 1st match of this series and scheduled to be held at McLean Park, Napier. Pitch here in this stadium is a batting favored and with a little bit of bounce that may help the seamers. Spinners can play a key role in this pitch. As per the cricket prediction, a score of near about 190 runs should be as par.

Who Will Win New Zealand vs Australia 1st T20

Who Will Win New Zealand vs Australia 1st T20 Toss-AUS

Who Will Win New Zealand vs Australia 1st T20 Match-NZ