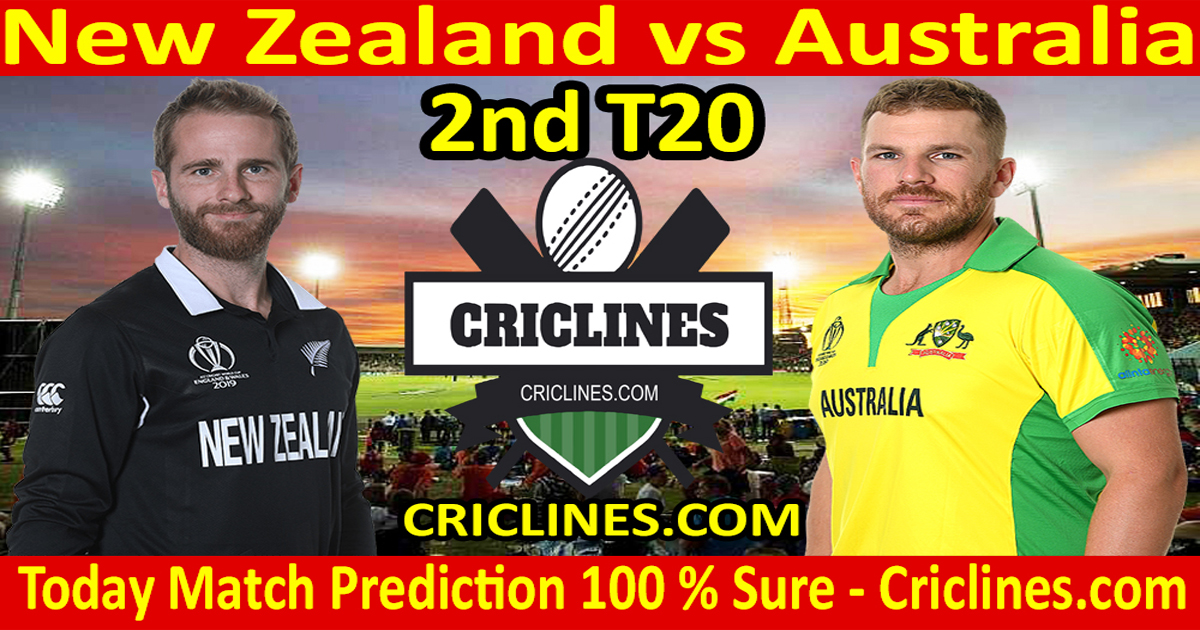 The cricket fans are ready to witness yet another big battle of the T20 cricket. The 2nd T20 match of Australia tour of New Zealand, 2021 is scheduled to be held on Thursday, 25th February 2021 at University Oval, Dunedin. We are posting safe, secure, and accurate today match prediction of all matches of Australia and New Zealand.

We mentioned in the first prediction of this series of New Zealand and Australia that New Zealand has an edge over Australia in almost all departments of the game and we observed this in the first match. New Zealand won the first match with a handsome margin of 53 runs. The batting order of New Zealand gave the best performance overall. Martin Guptill, Tim Seifert, and the skipper Kane Williamson almost failed to perform well but Devon Conway took the charge and put a huge total on the board for New Zealand. He scored 99 runs and remained not out till the end of the inning. Glenn Phillips and James Neesham also performed well with the bat.

Like the batting, the bowling department of New Zealand also performed well in the first match of this series. They defended the target of 182 runs and sent the all-team of Australia back to the pavilion on a total of 131 runs in 17.3 overs. Ish Sodhi gave this best performance and picked four-wicket against 28 runs in four overs. Tim Southee and Trent Boult picked two wickets each while Kyle Jamieson and Mitchell Santner had one wicket each to their names.

Australia gave a chance to some new faces in the final squad of the playing eleven for the first t20 match and this decision did not work for Australia properly. Their bowlers succeeded to pick some key wickets early but lost the momentum and in the end, they were charged for 181 runs. Jhye Richardson and Daniel Sams picked two wickets each while Marcus Stoinis had one wicket to his name. Kane Richardson, Adam Zampa, Ashton Agar, and Glenn Maxwell were the bowlers who failed to pick any wicket.

The batting order of Australia failed to adjust to the conditions of New Zealand. The key players of this team are out of form. We had observed that Aaron Finch is struggling for a long time including Big Bash League. Josh Philippe is a well-known batsman but the conditions are not in the support of this key player of Australia. Australia had its real batting strength in the middle order. Marcus Stoinis, Glenn Maxwell, and Mitchell Marsh have to play a role for Australia to put a big total on the board.

Australia had played a total of 132 T20 matches where they won 69 and Opposing teams won 60 matches. Their three matches were ended with no result.

The 1st match of this series and scheduled to be held at University Oval, Dunedin. Pitch here in this stadium is a batting favored and with a little bit of bounce that may help the seamers. Spinners can play a key role in this pitch. As per the live cricket score,  a total score of near about 190 runs should be as par.

The weather forecast for Dunedin is not good for this match. There are some chances of rain and that is possible that we may have a short match.

Who Will Win New Zealand vs Australia 2nd T20

Who Will Win New Zealand vs Australia 2nd T20 Toss-AUS

Who Will Win New Zealand vs Australia 2nd T20 Match-NZ