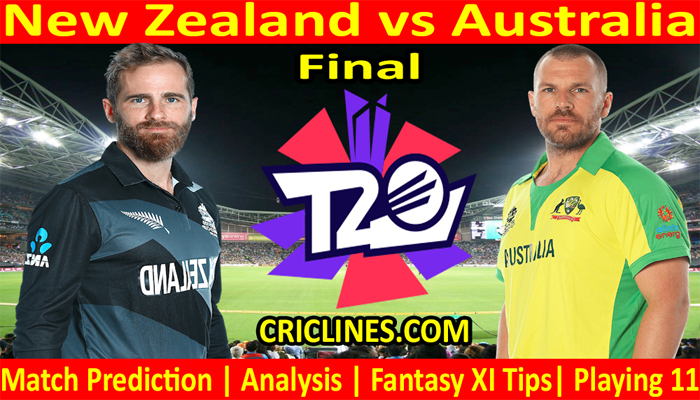 The cricket fans are ready to witness yet another big battle of World Cup T20. The Final of World Cup T20 2021 is scheduled to play between New Zealand and Australia on Sunday, 14th November 2021 at Dubai International Cricket Stadium, Dubai. We are posting safe, accurate, and secure today match prediction of ICC T20 World Cup free.

Both teams, New Zealand and Australia had never won the title of T20 World Cup and any team between these two will have the crown of T20 champion on its head. New Zealand had beaten England, a favorite team to win this tournament and the best T20 side since last some years. Australia had won the semi-final match against Pakistan, a team that was unbeaten throughout this edition of the T20 World Cup. Both semi-final matches were high scoring and dramatic which went to the last overs.

New Zealand is unlucky right before this match. Devon Conway made a huge impact in the semi-final and played a key in the win of New Zealand. He is out from this big match due to the injury in his hand. This can be a huge loss for New Zealand and we think that Tim Seifert will replace him in this match. The batting order of New Zealand had not scored big runs on this tournament and none batsman of this team had crossed 200 runs. Daryl Mitchell is in good form and he was the highest run-scorer in the semi-final match against England where he scored 72 runs on 47 deliveries with the help of four boundaries and the same huge sixes. Devon Conway scored 48 runs at the strike rate of 121.

James Neesham played an important role in a win against England. He smashed the inning of 27 runs on just 11 balls with the help of one boundary and three huge sixes. The batting order of New Zealand is not strong and also will have the pressure of a big match. The strength of New Zealand is its bowling. Tim Southee and Trent Boult had played a key role for New Zealand in this tournament and had a lot of responsibilities on their shoulders. Both bowlers can be good against the opening batting pair of Australia, Aaron Finch, and David Warner.

Australia had beaten Pakistan in the semi-final and they should have a lot of confidence in this match. They had done which India, New Zealand, and Afghanistan could not do. The bowling unit of Australia did not prove well against Pakistan where they leaked 177 runs but this does not mean they are a weak bowling side. Mitch Starc was good in the semi-final match where he got two wickets but leaked plenty of runs. He was charged for 38 runs in his four overs. Pat Cummins and Josh Hazelwood were also not good with the ball. These both are the best T20 bowlers and can bounce back strongly.

Adam Zampa was just outstanding with the ball in the semi-final. He picked the wicket of Babar Azam and leaked just 22 runs in his four overs. Glenn Maxwell and Mitchell Marsh can also be used by Australia for bowling. The batting order of Australia is very strong when we compare it with New Zealand. David Warner was just superb against Pakistan and played well against Shaheen Afridi and Haris Rauf. He is in good form and can be dangerous for the bowling unit of New Zealand. Mitchell Mars will also score runs in this match. We saw some outstanding batting performances by Matthew Wade and Marcus Stoinis. Both batters can also play well against Trent Boult and Tim Southee.

Australia had a decent record while playing against New Zealand in T20 format. They had won nine out of 14 matches played. New Zealand had won five matches against Australia.

David Warner, Trent Boult, and Adam Zampa are the key players to watch in this match.

The Final of World Cup T20 2021 is going to be held at Dubai International Cricket Stadium, Dubai. We had observed in the previous matches played here that the pitch here at this venue is good for batting. The track is slower than the others we have seen and helps the spinners quite a bit. We are hoping that the surface is bound to get slower and be a bit more difficult for batting in this match. A score of 170 is going to be tough to chase.

Who Will Win New Zealand vs Australia, Final WTC 21