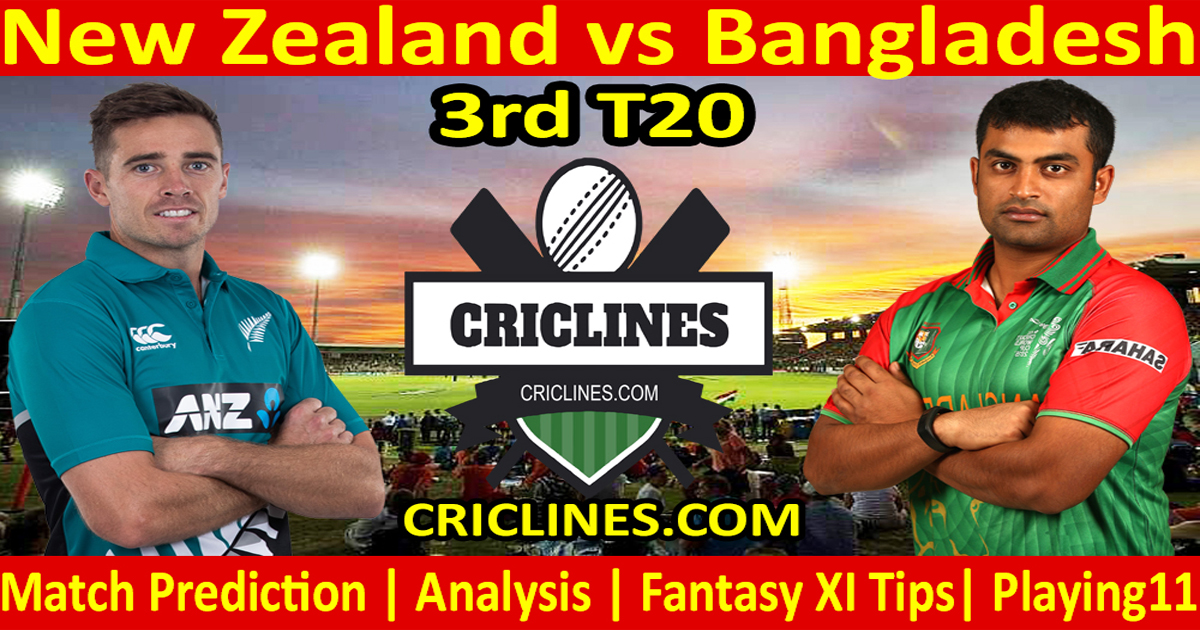 The world is ready to witness yet another big battle of T20 cricket. The 3rd T20 match of the Bangladesh tour of New Zealand, 2021 is scheduled to be held on Thursday, 1st April 2021 at Eden Park, Auckland. We are posting safe, secure, and accurate today match prediction of all matches of Bangladesh and New Zealand.

After winning the ODI series, New Zealand had also won the T20 series with 2-0 against Bangladesh. They won the 2nd T20 match by the margin of 28 runs. That was a rain-affected match which was decided through the DLS method. They lost the toss and were asked to bat first. The performance of their batting order was outstanding. They scored 173 runs in 17.5 overs when the rain started and the match was stopped. Glenn Phillips was the most successful and highest run-scorer from their side who remained not out after scoring 58 runs. He faced 31 deliveries and smashed five boundaries and two sixes. Daryl Mitchell also performed well with the bat. He scored 34 runs on just 16 balls with the help of six boundaries.

Bangladesh had lost both series against New Zealand. They had faced whitewash in the ODI series and now, they have the threat of the same clean sweep in the T20 series as they had lost both T20 matches played so far. They were beaten by the margin of 28 runs in the previous match. They won the toss and decided to field first. Their bowling department once again failed to perform well. They leaked 173 runs in 17.5 over till the rain started. Mahedi Hasan was the highest wicket-taker from their side but he leaked plenty of runs. He picked two wickets in his four overs bowled out against 45 runs. Shoriful Islam, Taskin Ahmed, and Saifuddin picked one wicket each.

Like the bowling, the batting order of Bangladesh also failed once again in the previous match. They failed to chase the given target of 171 runs in 16 over and could manage to score 142 runs. Soumya Sarkar was the highest run-scorer from their side who scored 51 runs while he faced 27 deliveries and smashed five boundaries and three sixes. Mohammad Naim was the other batsman from the Bengal Tiger who put some runs on the board. He scored 38 runs on 35 deliveries with the help of four boundaries. The skipper, Mahmudullah scored 21 runs while Mahedi Hasan remained not out after scoring 12 runs.

Bangladesh had played a total of 98 T20 matches where they won 32 and Opposing teams won 64 matches. Their two matches were ended with no result.

New Zealand had played 144 T20 matches. They won 71 matches while opposing teams had also won 69 matches. Their 4 matches were ended without any result.

The 1st match of this series and scheduled to be held at Eden Park, Auckland. Pitch here in this stadium is a batting favored and with a little bit of bounce that may help the seamers. Spinners can play a key role in this pitch. A score of near about 190 runs should be as par.

Who Will Win New Zealand vs Bangladesh 3rd T20

Who Will Win New Zealand vs Bangladesh 3rd T20 Toss-BAN