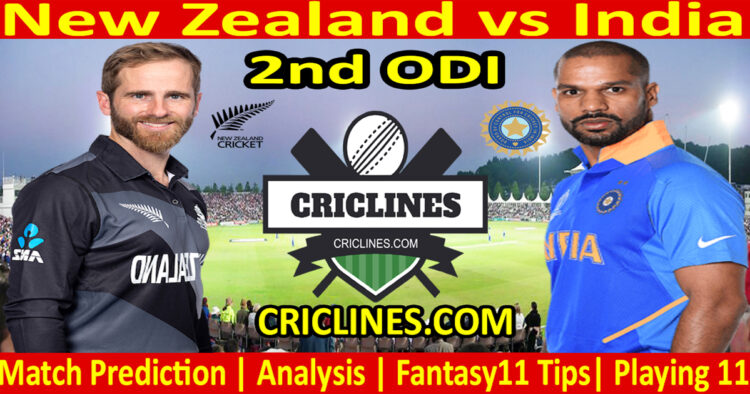 The world is ready to witness yet another big battle of ODI cricket. The 2nd ODI match of India’s tour of New Zealand, 2022 is scheduled to be held on Sunday, 27th November 2022 at Seddon Park, Hamilton. We are posting 100 safe, perfect, and accurate today match prediction for all matches of New Zealand and India.

India won the series of three T20 matches but failed to have a good start to this series of three ODI matches and lost the opening match by a handsome margin of seven wickets. We are not saying that India did not perform well but this is also a fact that they were on the losing side. New Zealand bounced back strongly after losing the T20 series and now is leading the series three ODI matches 1-0. Now they have to win just one out of the remaining two matches to win this ODI series.

New Zealand won the first ODI match because of the best performance by their batting order. They toss and decided to field first. The performance of their bowling unit was not much impressive as they were expecting. They leaked 306 runs in 50 overs. Almost all bowlers from their side leaked plenty of runs. Lockie Ferguson was the most successful bowler from their side who picked three wickets in 10 overs against 59 runs. Tim Southee also performed well and picked up three wickets while he was charged with 73 runs in 10 overs. Adam Milne was the other bowler who had a wicket to his name. He picked one wicket in 10 overs while he leaked 67 runs. Matt Henry and Mitchell Santner were the bowlers who failed to pick any wicket.

The way how the batting order of New Zealand performed in the previous match was just outstanding. They chased the target of 307 runs in just 47.1 overs and almost all batters from their side put some runs on the board. Tom Latham was the most successful and highest run-scorer from their side scoring a century. He remained not out till the chase of the target after scoring 145 runs on 104 balls with the help of 19 boundaries and five huge sixes. The skipper, Kane Williamson also had an outstanding performance with the bat. He scored 94 runs on 98 balls and smashed seven boundaries and one huge six. He also remained not out till the chase of the target. Devon Conway scored 24 runs while Finn Allen had 22 runs to his name. Daryl Mitchell scored 11 runs. If the bowling unit of New Zealand gives its best performance in this match, we are sure that they will give a tough time to India in this match.

India performed well but they were on the losing side due to the worst bowling performance. They were put into bat first after losing the toss. The performance of Indian batters was just outstanding. They scored 306 runs in 50 overs and all batters from team India scored some runs. Shubman Gill and Dhawan opened the batting inning for India and provided a good opening start of 124 runs for the partnership of the first wicket. Shreyas Iyer was promoted up the order and he also performed well. He was the most successful and highest run-scorer from their side with 80 runs to his name on 76 balls with the help of four boundaries and the same huge sixes. The new skipper of team India, Shikhar Dhawan also had an outstanding performance with the bat and scored 72 runs on 77 balls. He smashed 13 boundaries during his inning.

Shubman Gill scored 50 runs while Washington Sundar remained not out after scoring 37 runs. He faced just 16 balls and smashed three boundaries and the same huge sixes. Sanju Samson also performed well and scored 36 runs. The performance of the bowling unit of team India was very poor in the previous match. They failed to stop the batting order of New Zealand from scoring runs. Arshdeep Singh and Umran Malik have their ODI debut in the previous match. Umran Malik proved the most successful and highest wicket-taker from their side with two wickets to his name in 10 overs against 66 runs. Shardul Thakur had a wicket to his name but he leaked a lot of runs. He picked one wicket while he was charged with 63 runs in nine overs. No other bowler from their side could manage to pick any wicket. Arshdeep Singh was good in the T20 series but failed to give the best performance in his first ODI and failed to pick any wicket. He was charged with 68 runs in 8.1 overs. Washington Sundar and Yuzvendra Chahal also remained wicketless in the previous match.

New Zealand had played a total of 790 ODI matches where they won 364 matches and opposing teams won 380 matches. Their 40 matches ended with no result and six matches were tied.

India had played a total of 1015 ODI matches so far. They won 531 while other teams won 434 matches. 41 matches of India ended with no result and 9 matches were tied.

New Zealand played 111 ODI matches against India where they won 50 matches and India won 55 matches. Their one match was tied and five matches came with no result.

The 2nd ODI match between New Zealand and India is going to be played at Seddon Park, Hamilton. This is one of the biggest venues in New Zealand in terms of crowd capacity. The pitch on this venue is good for batting. It also has a bit of help for the spin bowlers. As per the live cricket score, a total of 330 runs should be a par score.

The weather forecast in Hamilton on match day is good. There are almost no chances of rain and we may have a full match to watch.