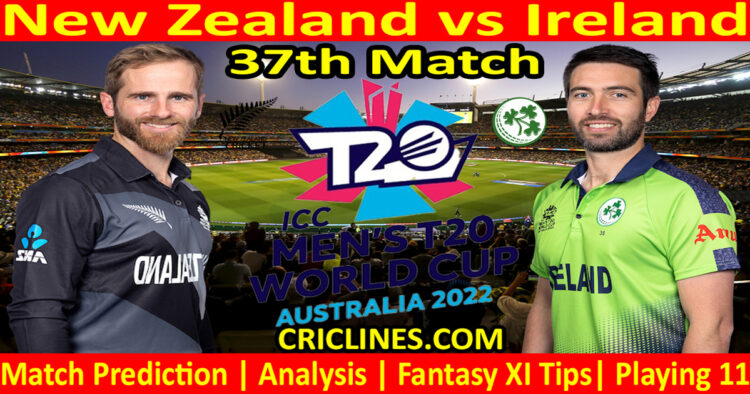 Cricket fans are ready to witness yet another big battle of the World Cup T20. The 37th match of World Cup T20 2022 is scheduled to play between New Zealand and Ireland on Friday, 4th November 2022 at Adelaide Oval, Adelaide. We are posting a safe, accurate, and secure today match prediction of the ICC T20 World Cup 2022.

The way how New Zealand performed in this tournament is just outstanding. They had played four matches with two wins to their name. They had lost one match while their one match was washed out by the rain. They are currently leading the table. They have a bright chance to qualify for the semi-finals. They are equal in the points with England but have a good net run rate. They were beaten by England in their most recent match.

Ireland had not been impressive in this ICC T20 World Cup. They also had played four matches with just one win to their name. They had lost two matches while their one match was not decided due to rain. They are situated at the fifth position on the points table of Super 12 Group 1. They had lost their most recent match against Australia by a big margin.

New Zealand is rich in batting and bowling units but their bowlers failed to give the best performance in the previous match and leaked 179 runs in 20 overs. Trent Boult, Tim Southee, Mitchell Santner, Lockie Ferguson, and Ish Sodhi are leading bowlers in the squad of New Zealand but they failed to stop the batting order of England from scoring runs. Lockie Ferguson was the highest wicket-taker from their side but he leaked a lot of runs. He picked up two wickets in four overs while he was charged for 45 runs. Mitchell Santner proved the most economical bowler from their side with one wicket to his name in four overs against just 25 runs. Tim Southee and Ish Sodhi also picked one wicket each while Trent Boult was the only bowler from their side who failed to pick any wicket.

The performance of the batting order of New Zealand was not much impressive. They had a slow start while chasing a big target on the board. This was the key reason why they lost the match. They could manage to score 159 runs while chasing the target of 180 runs. Glenn Phillips was the only successful batter from their side who scored 62 runs on 36 balls with the help of four boundaries and three huge sixes. The skipper, Kane Williamson scored 40 runs but destroyed 40 balls. He smashed just three boundaries during his inning. Finn Allen and Mitchell Santner scored 16 runs. The batters of New Zealand need to improve their strike rate to score some big runs against the strong bowling units of the different teams. We are sure that they will perform well against Ireland in this important match.

Ireland faced Australia in the previous match where they were beaten by a big margin of 42 runs. They won the toss and decided to field first. The performance of their batting order was not much impressive as they leaked 179 runs in 20 overs. Joshua Little, Mark Adair, Barry McCarthy, Gareth Delany, Fionn Hand, and George Dockrell are the leading bowlers of Ireland. Barry McCarthy was the most successful and highest wicket-taker from their side who picked three wickets in four overs while he was charged for 29 runs. Joshua Little also performed well and picked two wickets in four overs against just 21 runs. No other bowler from their side could manage to pick any wicket. Dockrell, Fionn Hand, and Mark Adair were the bowlers who failed to pick any wicket.

The batting order of Ireland also failed to give the best performance. They could manage to score 137 runs and their full team came back to the pavilion in 18.1 overs. Lorcan Tucker was the only successful batter from their side who remained not out after scoring 71 runs on just 48 balls with the help of nine boundaries and one huge six. Gareth Delany scored 14 runs while Paul Stirling and Mark Adair scored 11 runs each. No other batter from their side could even enter into the double figure. Andrew Balbirnie, Harry Tector, Curtis Campher, Gareth Delany, and Fionn Hand have experienced batters in their side but failed to score some big runs. Curtis Campher and George Dockrell were the batters who failed to open the account on the scoreboard. Ireland had not been impressive in this tournament with the batting and bowling and they need to improve things to compete against strong sides like New Zealand.

New Zealand had played 4 matches against Ireland and they had won all 4 matches.

New Zealand is full of experienced and young players in the t20 format. The batting order of this team is also strong and some well-known hitters of the t20 format are part of the squad of this team, so the winning chances of today’s match for New Zealand have been increased. The equation of who will win today’s cricket match prediction and who will win the cricket match today is mentioned as under.

The 37th match of World Cup T20 2022 is going to be held at Adelaide Oval, Adelaide. We had observed in the previous matches played here that the pitch here at this venue is good for batting. The pitch is bouncy and fast and run-scoring is not much easy in early and middle overs. We are hoping that the surface is bound to get slower and be a bit more difficult for batting in this match. A score of 170 is going to be tough to chase.

Glenn Phillips, Lockie Ferguson, and Lorcan Tucker are key players to watch in this match.

We provided you above-mentioned today match prediction on the basis of our research, understanding, and analysis. You can consider the point we had provided you and the final decision will be yours.