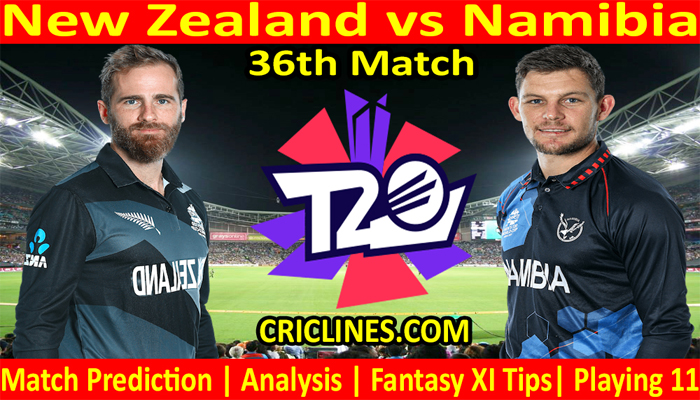 The world is ready to witness yet another big battle of World Cup T20. The 36th Match of World Cup T20 2021 is scheduled to play between New Zealand and Namibia on Friday, 5th November 2021 at Sharjah Cricket Stadium, Sharjah. We are posting safe, accurate, and secure today match prediction of ICC T20 World Cup free.

New Zealand is still alive in the race of semi-finals and for that, they have to beat Namibia and Afghanistan in their remaining matches. Right now, they had played three matches with two wins to their name. They had beaten India and Scotland but were beaten by Pakistan. On the other side, Namibia also had played three matches with just one win to their name. They had lost two matches and their chances to reach the semi-finals are almost nill.

New Zealand had beaten Scotland in their most recent match with a margin of 16 runs. The performance of their batting order was just outstanding. They scored a total of 172 runs in their inning of 20 overs. Martin Guptill was the most successful and highest run-scorer from their side who scored 93 runs on 56 deliveries with the help of six boundaries and seven huge sixes. Glenn Phillips also performed well with the bat. He scored 33 runs while Daryl Mitchell could manage to score 13 runs.

The performance of the bowling unit of New Zealand was not impressive in the previous match but they managed to defend the target of 173 runs and leaked 156 runs in their inning of 20 overs. Trent Boult was the most successful bowler from their side who picked two wickets in his four overs bowled out against 29 runs. Ish Sodhi also picked two wickets but he leaked plenty of runs. He was charged for 42 runs in his four overs bowled out. Tim Southee picked one wicket while Adam Milne and Mitchell Santner were the bowlers who failed to pick any wicket.

Namibia was beaten by Pakistan in their previous match by the margin of 45 runs. The bowling unit of Namibia was good till the 10th over where they leaked just 59 runs but soon after that, they lost the momentum and leaked 130 runs in their next 10 overs. They leaked a total of 189 runs in their inning of 20 overs. David Wiese was the only successful bowler from their side who picked one wicket in his four overs bowled out against 30 runs. Jan Frylinck also picked one wicket while he was charged for 31 runs in his four overs bowled out.

Ruben Trumpelmann, JJ Smit, Ben Shikongo, and Loftie-Eaton were the bowlers who failed to pick any wicket. The performance of the batting order of Namibia was good but they failed to chase the target of 190 runs. They scored 144 runs in their inning of 20 overs. Craig Williams was the highest run-scorer from their side who scored 40 runs with the help of five boundaries. David Wiese also had an outstanding performance with the bat and remained not out after scoring 43 runs. Stephan Baard scored 29 runs.

This will be the very first T20 International match between New Zealand and Namibia.

Martin Guptill, Trent Boult, and David Wiese are the key players to watch in this match.

The 36th Match of World Cup T20 2021 is going to be held at Sharjah Cricket Stadium, Sharjah. We had observed in the previous matches played here that the pitch here at this venue is good for batting. The track is slower than the others we have seen and helps the spinners quite a bit. We are hoping that the surface is bound to get slower and be a bit more difficult for batting in this match. A score of 170 is going to be tough to chase.

Who Will Win New Zealand vs Namibia, 36th Match WTC 21