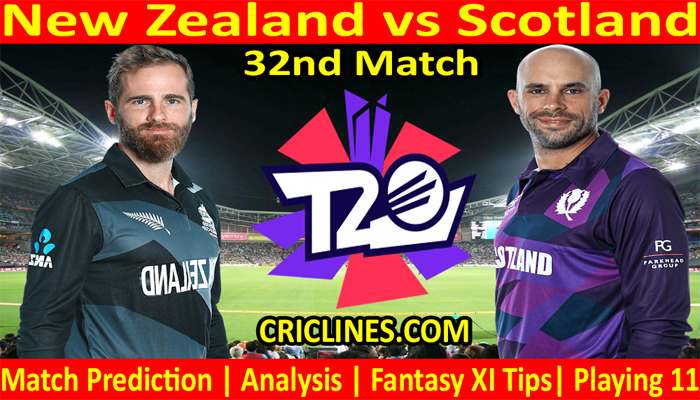 The world is ready to witness yet another big battle of World Cup T20. The 32nd match of World Cup T20 2021 is scheduled to play between New Zealand and Scotland on Wednesday, 3rd November 2021 at Dubai International Cricket Stadium, Dubai. We are posting safe, accurate, and secure today match prediction of ICC T20 World Cup free.

New Zealand had played two matches so far. They were beaten by Pakistan in their first match and they beat India in their second match with a handsome margin of eight wickets. They had three matches left and have to win all matches they have to play against Afghanistan, Namibia, and this team, Scotland. On the other side, Scotland had lost their both played matches.

New Zealand performed well in all departments of the game in their most recent match against India. They leaked just 110 runs in their 20 overs inning against the strong batting order of India. Trent Boult was the most successful and highest wicket-taker from their side who picked three wickets in his four overs bowled out against 20 runs. Ish Sodhi also had an outstanding performance with the ball. He picked two wickets in his four overs bowled out while he was charged for 17 runs.

Tim Southee and Adam Milne picked one wicket each while Mitchell Santner was the only bowler from their side who failed to pick any wicket. The performance of the batting order of New Zealand was also good. They chased the target of 111 runs in 14.3 overs. Daryl Mitchell was the highest run-scorer from their side who scored 49 runs. He faced 36 deliveries and smashed four boundaries and three huge sixes. Kane Williamson remained not out after scoring 33 runs while Martin Guptill had 20 runs to his name.

Scotland was beaten by Namibia in their most recent match by the margin of four wickets. The performance of their batting order was not impressive. They could manage to score 109 runs in their inning of 20 overs. Michael Leask was the most successful and highest run-scorer from their side who scored 44 runs on 27 deliveries with the help of four boundaries and two huge sixes. Chris Greaves scored 25 runs while M Cross could manage to score 19 runs.

The bowling unit of Scotland also failed to give the best performance in their previous match. They failed to defend the target of 110 runs and leaked this target in 19.1 overs. Michael Leask was the highest wicket-taker from their side who picked two wickets in his two overs bowled out against 12 runs. Mark Watt, Chris Greaves, Safyaan Sharif, and Bradley Wheal picked one wicket each while Josh Davey failed to pick any wicket.

New Zealand had played just one T20 match against Scotland which they won by the margin of seven wickets. This match was played back in 2009.

Daryl Mitchell, Kane Williamson, and Michael Leask are key players to watch in this match.

The 32nd Match of World Cup T20 2021 is going to be held at Dubai International Cricket Stadium, Dubai. We had observed in the previous matches played here that the pitch here at this venue is good for batting. The track is slower than the others we have seen and helps the spinners quite a bit. We are hoping that the surface is bound to get slower and be a bit more difficult for batting in this match. A score of 170 is going to be tough to chase.

Who Will Win New Zealand vs Scotland, 32nd Match WTC 21