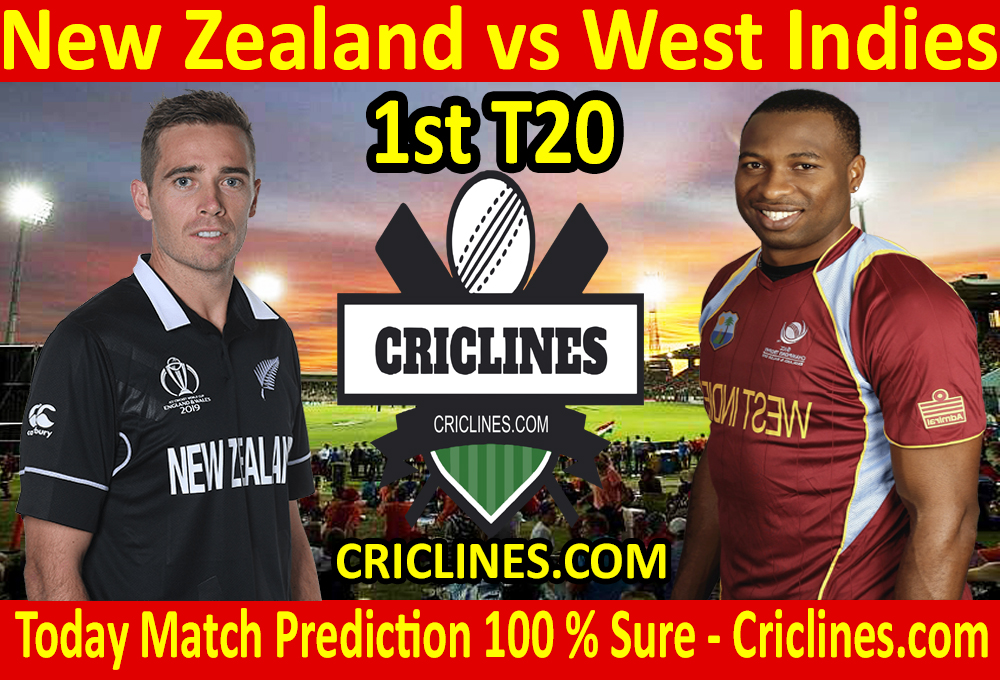 The world is ready to witness yet another big battle of the T20 cricket. The 1st T20 match of the West Indies tour of New Zealand, 2020 is scheduled to be held on Friday, 27th November 2020 at Eden Park, Auckland. We are posting safe, secure, and accurate today match prediction of all matches of West Indies and New Zealand.

Cricket is coming back to New Zealand after a long time and the players of this team had not played much cricket on any level. The batting order of New Zealand is going to lead by Glenn Phillips, Ross Taylor, Martin Guptill, and Tim Seifert while Jimmy Neesham and Mark Chapman will be playing in the middle order. Devon Conway also has a chance in the playing eleven.

The two key players of New Zealand, Kane Williamson and Trent Boult are not part of the playing xi and this can cause a huge loss for this team. Lockie Ferguson, Tim Southee, and Mitchel Santner will be taking care of the bowling unit. Hamish Bennett also may have a chance to be a part of the final team.

West Indies had produced a lot of world-class hard hitter when it comes to the shorter format of cricket. Andre Fletcher, Brandon King, Kieron Pollard, Kyle Mayers, Shimron Hetmyer, Nicholas Pooran, and maybe Fabian Allen will be taking care of the batting order of the West Indies. Shimron Hetmyer, Nicholas Pooran, and Kieron Pollard had recently performed in the Indian Premier League and seemed in the good form.

The bowling unit of the West Indies is not much stronger than the batting order. Sheldon Cottrell had performed well in the Indian Premier League recently but there is no other bowler who may be the partner of Cottrell. Kesrick Williams, Hayden Walsh, and Keemo Paul have to perform well to stop the batting order of New Zealand from scoring the runs.

West Indies had played a total of 126 T20 matches where they won 56 and Opposing teams won 63 matches. Their five matches were ended with no result.

New Zealand had played 131 T20 matches. They won 62 matches while opposing teams won 66 matches. Their three matches were ended without any result.

The 1st match of this series and scheduled to be held at Eden Park, Auckland. Pitch here in this stadium is a batting favored and with a little bit of bounce that may help the seamers. Spinners can play a key role in this pitch. A score of near about 180 runs should be as a par.

Who Will Win New Zealand vs West Indies 1st T20