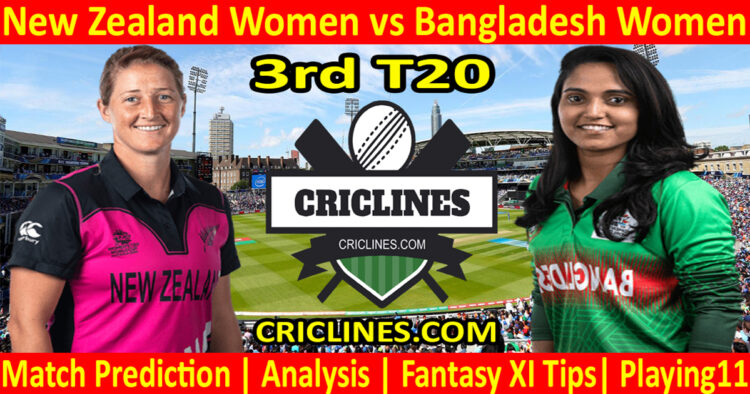 The world is ready to witness yet another big battle of Women’s T20 cricket. The 3rd T20 match of Bangladesh Women’s tour of New Zealand, 2022 is scheduled to be held on Wednesday, 7th December 2022 at John Davies Oval, Queenstown. We are providing 100 safe, perfect, and accurate today match prediction for all matches of New Zealand Women and Bangladesh Women.

New Zealand Women had won this series of three T20 matches and now have a golden chance to have a clean sweep. They had won both T20 matches against Bangladesh with a good margin and are a clear favorite team to win this match. Bangladesh Women improved their performance in the second T20 match but they were still on the losing side. Will they give an extraordinary performance in this match and avoid a whitewash? this is still a big question and will have the answer to this question in this match.

The batting order of New Zealand Women had performed well in both previously played matches and they were also good in the most recent match where they won the toss and decided to bat first. They scored a total of 148 runs in 20 overs. Amelia Kerr was the most successful and highest run-scorer from their side who remained not out after scoring 46 runs on just 30 balls with the help of five boundaries. Maddy Green also had an outstanding performance with the bat. She scored 37 runs while she faced 25 balls and smashed four boundaries during her inning. She also remained not out till the 20th over. Georgia Plimmer and Suzie Bates scored 20 runs each in the previous match.

The skipper, S Devine also performed well with the bat in the previous match and she scored 19 runs. The bowling unit of New Zealand Women also performed well and defended the target of 149 runs and leaked 111 runs in 20 overs. Hayley Jensen was the most successful bowler from their side with two wickets to her name in three overs against just 12 runs. Fran Jonas also performed well and scored 18 runs in four overs. Lea Tahuhu and Eden Carson also picked one wicket each. Eden Carson leaked 19 runs in three overs while Lea Tahuhu was charged for 23 runs in four overs. Amelia Kerr and the skipper, Sophie Devine were the bowlers who failed to pick any wicket in the most recent match. New Zealand Women are performing well and we are sure that they will win this match.

We saw an improved Bangladesh Women’s team in the previous match than they were in the first match but they failed to win the match. They were asked to field first after losing the toss. The performance of their bowling unit was not much impressive but good. They restricted the strong batting order of New Zealand Women on 148 runs in 20 overs. Marufa Akter was the most successful and highest wicket-taker from their side who had two wickets to his name in four overs while she was charged for 22 runs. Ritu Moni also performed well and picked one wicket in three overs against just 12 runs. Rumana Ahmed also had a wicket to her name but she leaked a lot of runs. She picked one wicket while she was charged for 17 runs in two overs.

Jahanara Alam, Salma Khatun, and Nahida Akter were the bowlers who could not manage to pick any wickets in the second T20 match. The batting order of Bangladesh Women once again failed to give the best performance and scored just 111 runs in 20 overs while chasing the target of 149 runs. No batter from their side could manage to put some big runs on the board and just three batters entered into the double figures. The skipper, Nigar Sultana was the most successful and highest run-scorer from their side with 31 runs to her name on 33 balls with the help of four boundaries. Sharmin Akhter also put some runs on the board. She scored 22 runs while she destroyed 30 balls and smashed two boundaries during her inning. Fargana Hoque also performed well and scored 15 runs. Ritu Moni scored nine runs and remained not out till the 20th over while Murshida Khatun scored just three runs.

The 3rd T20 match between New Zealand Women and Bangladesh Women is going to be played at John Davies Oval, Queenstown. The pitch at this stadium is excellent for batting. The boundaries at this venue are short and will bring the spinners into play. The pitch will continue to be good for batting throughout the match. As per the live cricket score, a total of 270 runs should be a par score on this pitch.

The weather forecast in Queenstown on match day is not very good. There are some chances of rain but that is possible that we may have an interrupted match.