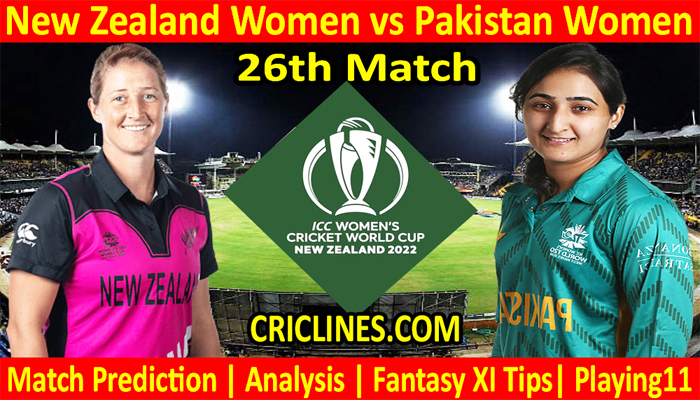 The cricket fans are ready to witness yet another big battle of Women’s ODI cricket. The 26th match of Women’s World Cup 2022 is scheduled to play between New Zealand Women and Pakistan Women on Saturday, 26th March 2022 at Hagley Oval, Christchurch. We are posting safe, accurate, and secure today match prediction of world cup free.

The performance of the home side, New Zealand Women had not been impressive in this big event of cricket. They had played a total of six matches with just two wins to their name. They had lost four matches and are situated at the sixth position on the points table. On the other side, Pakistan Women had totally failed to give the best performance in this tournament and they are the worst-performing team right now. They had won just one out of six matches played. They had lost five matches and are laying at the bottom of the points table.

The most recent match of New Zealand Women against England Women was very interesting which they lost by the margin of just one wicket. They lost the toss and were asked to bat first. The performance of their batting order was average. They could manage to score 203 runs in their inning of 50 overs. Their top-order performed well but their middle batting order failed to put some big runs on the board. Maddy Green was the most successful and highest run-scorer from their side who remained not out after scoring 52 runs. She faced 75 balls and smashed four boundaries and one huge six during her inning.

S Devine scored 41 runs while Amelia Kerr and Satterthwaite scored 24 runs each. The bowling unit New Zealand performed well but they failed to defend the target of 204 runs and leaked this target in 47.2 overs. Frances Mackay was the most successful and highest wicket-taker from their side who picked four wickets in her nine overs bowled out against 34 runs. Jess Kerr picked two wickets while Lea Tahuhu and Brooke Halliday picked one wicket each.

Pakistan Women were beaten by England Women in their previous match by a huge margin of nine wickets. They lost the toss and were asked to bat first. The batting order of Pakistan totally collapsed in the previous match. They could manage to score 105 runs in their full team came back to the pavilion in 41.3 overs. Ameen was the highest run-scorer from their side who scored 32 runs with the help of four boundaries. Sidra Nawaz scored 23 runs while Omaima Sohail could manage to score just 11 runs. No other batter from their side could even inter into double-figure.

The performance of the bowling unit of Pakistan was also very poor. They failed to defend a low target on the board and leaked the target of 106 runs in 19.2 overs. Diana Baig was the only bowler from their side who could manage to pick a wicket while no other bowler from the Pakistan side could manage to pick any wicket. Fatima Sana, Aiman Anwer, Aliya Riaz, Nashra Sandhu, and Nida Dar were the bowlers who failed to pick any wicket.

The 26th match of Women’s ODI World Cup 2022 will be played at Hagley Oval, Christchurch. The pitch here at this stadium has something in it for both batsmen and bowlers. It is typically a little slow and low but very flat. The pace bowlers have very little to work with and it is the slower bowlers that will be the bigger threat.

The weather forecast in Christchurch is predicting some chances of rain on the matchday but hopefully, it should clear up by the time the match gets started.

Check out the Dream11 lineup for the 26th Women’s ODI World Cup match to be played between New Zealand Women vs Pakistan Women.