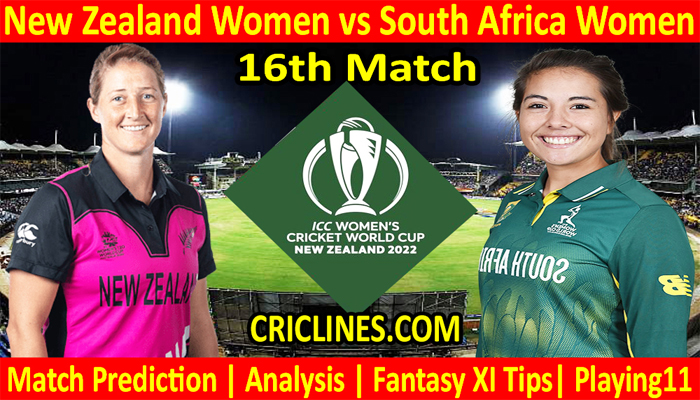 The cricket fans are ready to witness yet another big battle of Women’s ODI cricket. The 16th match of Women’s World Cup 2022 is scheduled to play between New Zealand Women and South Africa Women on Thursday, 17th March 2022 at Seddon Park, Hamilton. We are posting safe, accurate, and secure today match prediction of world cup free.

The performance of New Zealand Women had been average in this tournament so far. They had played four matches with two wins to their name. They had lost two matches and are holding the 4th spot on the table. On the other side, South Africa Women had been just outstanding in this big event of cricket. They had won all three matches played so far and are situated at the second position on the points table.

New Zealand Women had faced a heavy defeat against Australia Women by a huge margin of 141 runs in their previous match. They won the toss and decided to field first. The bowling unit of New Zealand totally failed to give the best performance. They leaked 269 runs in their inning of 50 overs. Lea Tahuhu was the most successful and highest wicket-taker from their side who picked three wickets in her nine overs bowled out against 53 runs.

Hannah Rowe, F Mackay, Jensen, and Amelia Kerr picked one wicket each in the previous match. The batting order of New Zealand totally collapsed in their most recent match. Their full team came back to the pavilion in 30.2 overs on a total of 128 runs while chasing the target of 270 runs. Amy Satterthwaite was the most successful and highest run-scorer from their side who scored 44 runs on 67 deliveries with the help of five boundaries.

South Africa Women had beaten England Women in their most recent match by the margin of three wickets. They won the toss and decided to field first. The performance of their bowling unit was good. They leaked 235 runs in their inning of 50 overs. Marizanne Kapp was the most successful and highest wicket-taker from their side who picked five wickets in her 10 overs bowled out against 45 runs.

Masabata Klaas picked two wickets while Ayabonga Khaka had one wicket to her name. The performance of the batting order of South Africa was also good. They chased the target of 236 runs in 49.2 overs. Laura Wolvaardt was the highest run-scorer from their side who scored 77 runs. She faced 101 balls and smashed eight boundaries during her inning. Sune Luus scored 36 runs while Marizanne Kapp could manage to score 32 runs.

The 16th match of Women’s ODI World Cup 2022 will be played at Seddon Park, Hamilton. The pitch here at this stadium has something in it for both batsmen and bowlers. It is typically a little slow and low but very flat. The pace bowlers have very little to work with and it is the slower bowlers that will be the bigger threat.

Check out the Dream11 lineup for the 20th Women’s ODI World Cup match to be played between New Zealand Women vs South Africa Women.