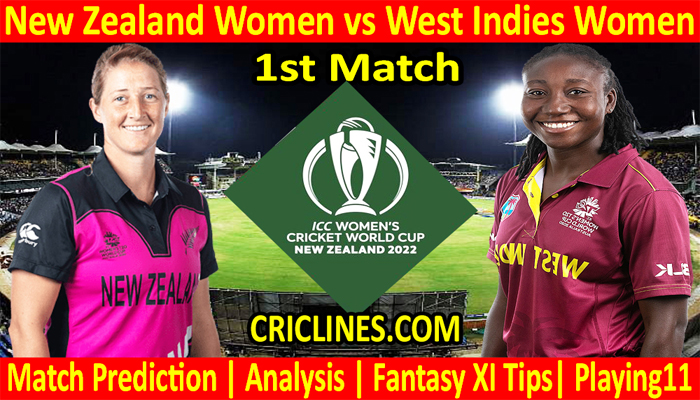 The cricket fans are ready to witness yet another big battle of Women’s ODI cricket. The 1st match of Women’s World Cup 2022 is scheduled to play between New Zealand Women and West Indies Women on Friday, 4th March 2022 at University Oval, Dunedin. We are posting safe, accurate, and secure today match prediction of world cup free.

New Zealand Women were beaten by Pakistan Women in the warmup match by the margin of four wickets. They could manage to score 229 runs and their full team came back to the pavilion in 45 overs. Amy Satterthwaite was the highest run-scorer from their side who scored 80 runs. She faced 85 balls and smashed seven boundaries during her inning. Maddy Green scored 58 runs while Jess Kerr remained not out after scoring 34 runs.

The bowling unit of New Zealand Women failed to defend the target of 230 runs and leaked this target in 49.2 overs. There was an interesting thing as they used nine bowlers in that match. Lea Tahuhu, Jess Kerr, Sophie Devine, and Hayley Jensen picked one wicket each while Rosemary Mair, Fran Jonas, Hannah Rowe, Amelia Kerr, and Frances Mackay were the bowlers who failed to pick any wicket.

West Indies Women faced a heavy defeat against Australia Women by the margin of 90 runs where their bowling and batting order totally failed to perform well. They leaked 259 runs in their 50 overs inning while fielding first. Stafanie Taylor was the highest wicket-taker from their side who picked three wickets in her 10 overs bowled out while she was charged for 51 runs. Hayley Matthews and Anisa Mohammed were the bowlers who failed to pick any wicket.

Shemaine Campbelle, Aaliyah Alleyne, Shakera Selman, and Afy Fletcher were the bowlers who failed to pick any wicket. The batting order of West Indies Women totally collapsed in the warm-up match. They failed to chase the target of 260 runs and scored just 169 runs in their 50 overs inning. Stafanie Taylor was the highest run-scorer from their side who scored 66 runs. She faced 86 balls and smashed nine boundaries during her inning. Hayley Matthews scored 24 runs while Chedean Nation had 20 runs to her name.

The 1st match of Women’s ODI World Cup 2022 will be played at University Oval, Dunedin. The pitch here at this stadium has something in it for both batsmen and bowlers. It is typically a little slow and low but very flat. The pace bowlers have very little to work with and it is the slower bowlers that will be the bigger threat.

The weather forecast in Dunedin is predicting some chances of rain on the matchday but hopefully, it should clear up by the time the match gets started.

Check out the Dream11 lineup for the 20th Women’s ODI World Cup match to be played between New Zealand Women vs West Indies Women.

We had provided you with the above-mentioned Women’s World Cup prediction on the basis of our research, understanding, and analysis. These prediction tips have also been based on the reports that we have from our different sources. You can consider the point we had provided you and in the end, the final decision will be yours.