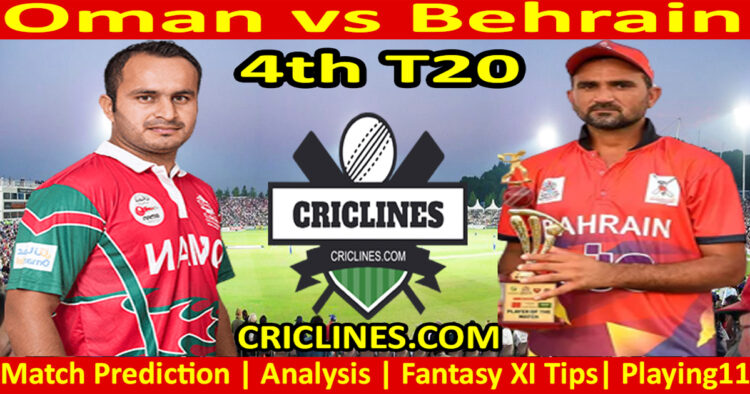 Oman had a kick start to this tournament and won their very first match against Saudi Arabia with a handsome margin of nine wickets. Oman had played a lot of T20 cricket in recent times and also had gotten some best players. They also have a strong and experienced batting order and bowling unit. They are currently leading the table. On the other hand, Bahrain failed to have a winning start to this first edition of the Desert Cup T20I Series and was beaten by Canada in their very first match.

Oman won its first match easily against Saudi Arabia. They lost the toss and were asked to field first. The way how their bowling unit performed in that match was just outstanding. They leaked just 86 runs in 20 overs and almost all bowlers from their side performed well. Remember that they used seven bowlers in the previous match and Bilal Khan was the most successful and highest wicket-taker from their side who picked three wickets in four overs against just 20 runs. Kaleemullah was the other bowler who performed well and picked wickets. He picked up two wickets in four overs while he was charged with just 14 runs.

Ayaan Khan and the skipper, Zeeshan Maqsood picked one wicket each while Rafiullah, Mohammad Nadeem, and Samay Shrivastava were the bowlers who failed to pick any wicket in the previous match. The batting order of Oman was also outstanding in the previous match. They chased the target of 87 runs in just 10.1 overs with nine wickets in hand. Jatinder Singh was the most successful and highest run-scorer from their side who remained not out after scoring 50 runs on just 28 balls with the help of seven boundaries and one huge six. Kashyap Prajapati was the other batter who put some runs on the board. He scored 32 runs while he faced 28 balls and smashed four boundaries during his inning. Shoaib Khan remained not out after scoring two runs.

Bahrain performed well in the previous match against Canada but they were on the losing side. They lost the toss and were asked to bat first. The way how their batting order performed in the previous match was just outstanding. They scored a total of 195 runs in 20 overs and almost all batters from their side put some runs on the board. Sohail Ahmed was the most successful and highest run-scorer from their side scoring 80 runs on just 37 balls with the help of nine boundaries and four huge sixes. He remained not out till the 20th over. Imran Anwar also had an outstanding performance with the bat and scored 51 runs on 42 balls. He smashed two boundaries and four huge sixes.

Haider Butt scored 18 runs while the skipper, Sarfaraz Ali had 14 runs to his name. Bahrain lost the previous match due to the worst performance by their bowling unit. They failed to defend the target of 196 runs and leaked this target in 19.2 overs. Muhammad Rizwan was the most successful and highest wicket-taker from their side who picked three wickets in four overs against 29 runs. The skipper, Sarfaraz Ali also performed well and picked some wickets. He picked two wickets in 3.2 overs but he leaked a lot of runs. He was charged with 38 runs. No other bowler from their side could manage to pick any wicket in the previous match. Shahid Mahmood, Sathaiya Veerapathiran, Imran Anwar, and Sachin Kumar were the bowlers who failed to pick any wicket in the previous match.

Oman had played a total of 48 T20 matches so far. They won 21 matches while other teams won 26 matches. Their 1 match ended with no result.

Bahrain had played 22 T20 International matches right now with 10 wins to their name. They had lost 12 matches.

Oman had played just one match against Bahrain where they won the match with a margin of eight wickets.

The 4th T20 match between Oman and Bahrain is going to be played at Al Amerat Cricket Ground (Ministry Turf 1), Al Amerat. The pitch at this stadium is excellent for batting. The boundaries at this venue are short and will bring the spinners into play. The pitch will continue to be good for batting throughout the match. A total of 180 can be a good total to defend.

The weather forecast in Al Amerat on match day is not very good for a cricket match. There are some chances of rain but and that is possible that we may have an interrupted match.

Dream11 prediction for Oman vs Bahrain. After checking the laT20 player’s availability, the Dream 11 Team for this match of Oman and Bahrain is mentioned under.

The above-mentioned match prediction of Oman vs Bahrain is based on our research, understanding, and analysis. You can consider the point we had provided you and finally, the decision will be yours that you have to make at your own risk.