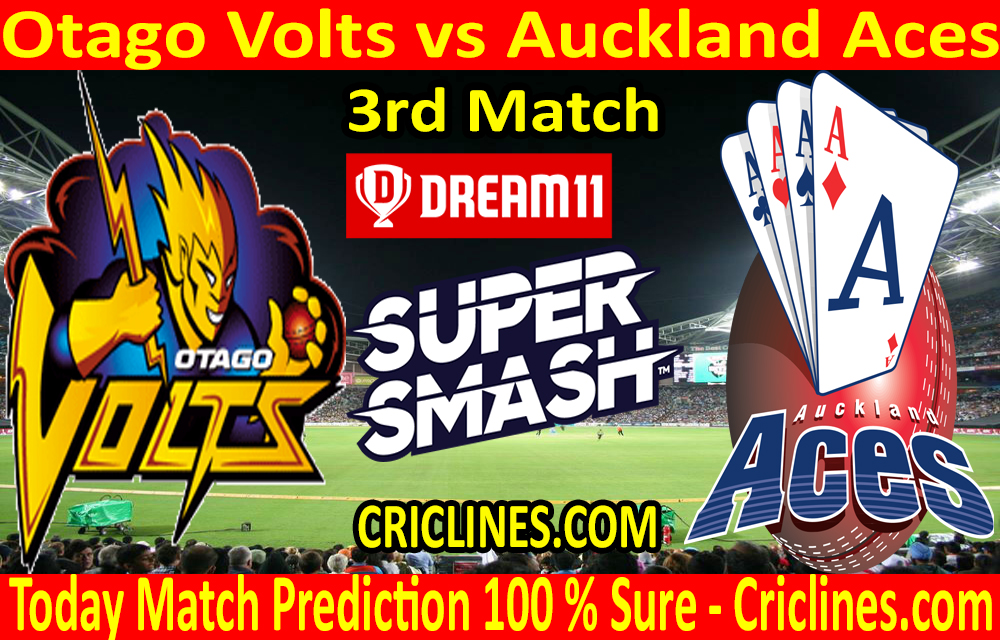 The cricket fans are ready to witness yet another big battle of T20 cricket. The 3rd Match of Super Smash League 2020-21 is scheduled to play between Auckland Aces and Otago Volts on Monday, 28th December 2020 at Molyneux Park, Alexandra. We are posting safe, accurate, and secure today match prediction for all matches of Super Smash League free.

Otago Volts performed well in the previous edition of the Super Smash League. They played a total of 10 matches with five wins to their name. They lost four matches while their one match was ended with no result. They were holding the 2nd position on the points table after the end of the league stage matches. They were beaten by Auckland Aces in the Elimination Final match.

Some key changes had been made by the management of Otago Volts. Jacob Duffy is going to lead to Volts this team during this tournament. The batting order of this team is good at least on papers. Neil Broom, Hamish Rutherford, Dean Foxcroft, Nick Kelly are the key batters for this team. Nathan G Smith is the key bowler of this team.

Auckland Aces had failed to have a kick start to this edition of the Super Smash League. They had lost the opening match of this tournament against Wellington Firebirds by the margin of four wickets. They lost the toss and were asked to bat first. The way how the batting order of Auckland performed in that match was just outstanding. They scored a total of 176 runs in their inning of 20 overs. Almost all batsmen from their side put some runs on the board. Sean Solia was the most successful and highest run-scorer from their side who scored 75 runs while he faced 56 deliveries and six boundaries and two sixes.

Graeme Beghin was the other batsman who put some runs on the board. He scored 32 runs on 23 deliveries with the help of five boundaries and one six. Graeme Beghin scored 29 runs while the skipper, Robert ODonnell remained not out till the end of their inning. Auckland Aces lost the previous match due to the worst performance by their bowling unit. They failed to defend the target of 177 runs and were charged for the target in 19.1 overs. William Somerville was the most successful bowler from their side who picked two wickets in his four overs bowled out while he was charged for 34 runs. Danru Ferns picked two wickets while Olly Pringle and the skipper, Robert ODonnell picked one wicket each. Ben Lister and Ryan Harrison were the bowlers who failed to pick any wicket in the previous match.

The 3rd Match of Super Smash League is going to be held at Molyneux Park, Alexandra. The pitch here at this venue should be good for batting as it is in most places around New Zealand. We should have a very high scoring match is we get some warm and sunny conditions. A score of more than 180 runs should be as a par.

The weather forecast for Alexandra for matchday is not good. There are some chances of rain but we are hoping that there will be no disturbance during this match.