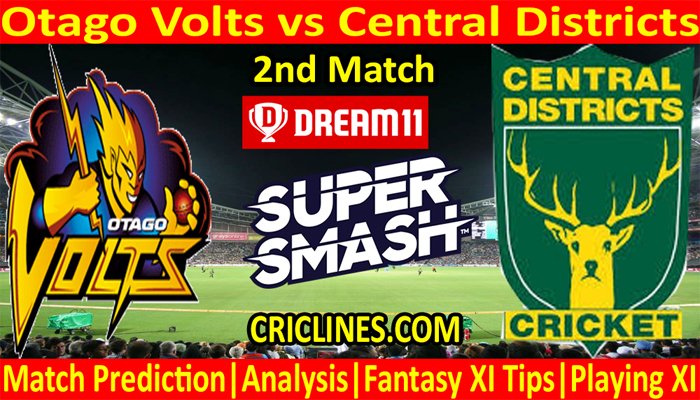 The cricket fans are ready to witness yet another big battle of T20 cricket. The 2nd match of Super Smash League 2021-22 is scheduled to play between Central Districts and Otago Volts on Sunday, 28th November 2021 at University Oval, Dunedin. We are posting safe, accurate, and secure today match prediction of Super Smash League free.

Otago Volts were the worst performing team of the previous season of Super Smash League. They could manage to win just two out of 10 matches at the league stage. They lost eight matches and were laying at the bottom of the points table after the league stage matches were ended. On the other side, Central Districts performed well in the previous edition of this tournament. They also played ten matches with six wins to their name. They were holding the second position on the table but were beaten by Canterbury Kings in the Elimination Final and could not reach the final match.

Otago Volts made some key changes in their squad after having the worst previous season. Hamish Rutherford is going to lead this team. He is a good batter and had performed well in the recent domestic tournaments. The batting order of this team is good but not strong at least on papers. Neil Broom, Anaru Kitchen, Dale Phillips, Jake Gibson, Nick Kelly, and Max Chu are the leading batsmen of the Volts.

The bowling unit of Otago Volts is also good but not strong and experienced. Matthew Bacon, Angus McKenzie, Travis Muller, Michael Rippon, Josh Finnie, and Jacob Duffy are the leading bowlers of this team. Neil Broom and Hamish Rutherford are the leading players of this team and will be much dependent on both players. This team does not have many youngsters on their side. They have to win this opening match to get some confidence and not repeat the performance of the previous season.

Central Districts were unlucky in the previous season of Super Smash League as they were the second-best performing team but failed to reach the final. Tom Bruce is going to lead this team in this tournament. Some key players of Central Districts will be missing from this match due to national duties. Will Young and Ajaz Patel are playing tests in India and they will not available for some opening matches.

Adam Milne is the key player of this team who is on rest after having a long T20 tournament. In the absence of their key players, Central Districts is still not a weak team. Doug Bracewell, Kieran Noema Barnett, George Worker, Blair Tickner, and Dane Cleaver are the players who can handle the batting and bowling department of this team.

The 2nd match of Super Smash League is going to be held at University Oval, Dunedin. The pitch here at this venue should be good for batting as it is in most places around New Zealand. We should have a very high-scoring match if we get some warm and sunny conditions. A score of more than 180 runs should be as par.

We had provided you with the above-mentioned Super Smash Prediction on the basis of our research, understanding, and analysis. These prediction tips have also based on the reports which we have from our different sources. You can consider the point we had provided you and in the end, the final decision will be yours.