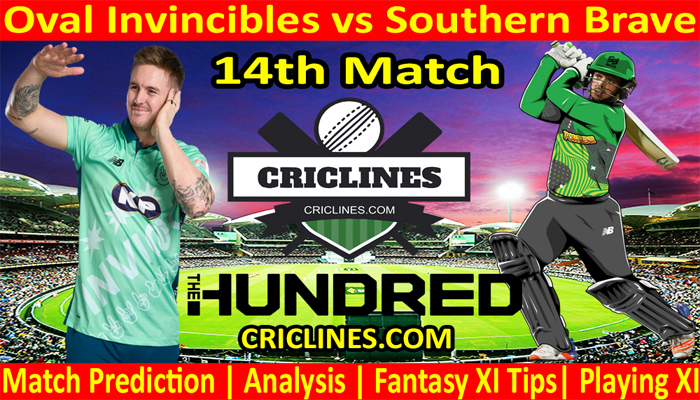 Oval Invincibles had performed well in this second edition of The Hundred League 2022. They had played a total of three matches with two wins to their name. They had lost one match and are situated at the third position on the points table. Southern Brave had not performed well in this tournament. They had won just one out of three matches played. They had lost two matches and are holding the sixth position on the points table.

Oval Invincibles lost the first match of The Hundred League 2022 but now had won two matches in a row. They had beaten Northern Superchargers and Welsh Fire recently. The performance of the batting order of Oval Invincibles was not very good but they put a handsome total on the board. They scored 158 runs in their 100 balls inning. Will Jacks was the most successful and highest run-scorer from their side who scored 81 runs on 45 balls with the help of seven boundaries and four huge sixes. Sam Curran scored 24 runs while the skipper, Billings could manage to score 14 runs.

The way how the bowling department of Oval Invincibles performed in the previous match was just outstanding. They defended the target of 159 runs and leaked just 119 runs in 100 balls. Sam Curran and Danny Briggs are the leading bowlers of Oval Invincibles with Sunil Narine, Matt Milnes, Tom Curran, and Mohammad Hasnain. Sunil Narine was the most successful bowler from their side who picked three wickets in his 20 balls against just 21 runs. Tom Curran performed well and picked two wickets. Sam Curran had one wicket to his name. After winning two matches in a row, the key players of Oval Invincibles will be full of confidence and will perform well in this match.

Southern Brave had a kick start to this tournament but now had lost two matches in a row. They were beaten by London Spirit in the most recent match and earlier, they lost the previous match against Birmingham Phoenix by a huge margin of 53 runs. They failed to give the best performance in almost each and every department of the game. The bowling department of this team leaked 176 runs in their 100 balls inning. Stoinis, Chris Jordan, J Lintott, and James Fuller picked one wicket each while Tymal Mills and George Garton were the bowlers who remained wicket-less in the previous match.

The batting order of Southern Brave almost collapsed in the previous match. They could manage to score 123 runs and their full team came back to the pavilion in 85 balls while chasing the target of 177 runs. James Vince and Quinton de Kock are the leading batters of STB with Marcus Stoinis, Alex Davies, Tim David, Ross Whiteley, and James Fuller. No bowlers from the above-mentioned batters could give the best performance. Alex Davies was the highest run-scorer from their side who scored 33 runs on 24 balls with the help of two boundaries and one huge six. James Vince scored 17 runs while Quinton de Kock and Chris Jordan scored 15 runs each. Southern Brave have to win this match otherwise, they will have fewer chances to move to the next level of this tournament.

Southern Brave is full of experienced and young players of the t20 format. The batting order of this team is also strong and some well-known hitters of the t20 format are part of the squad of this team, so the winning chances of today match for Southern Brave have been increased. The equation of who will win today cricket match prediction and who will win the cricket match today is mentioned as under.

The 14th Match match of The Hundred League 2022 is going to be held at Kennington Oval, London. We had observed in the previous matches played here that the pitch here at this venue is good for batting. The track is slower than the others we have seen and helps the spinners quite a bit. We are hoping that the surface is bound to get slower and be a bit more difficult for batting in this match. A score of 185 is going to be tough to chase.

Who Will Win Oval Invincibles vs Southern Brave, 14th Match The Hundred League-2022

We had provided you with the above-mentioned match prediction on the basis of our research, understanding, and analysis. You can consider the point we had provided you and the final decision will be yours that you have to make.