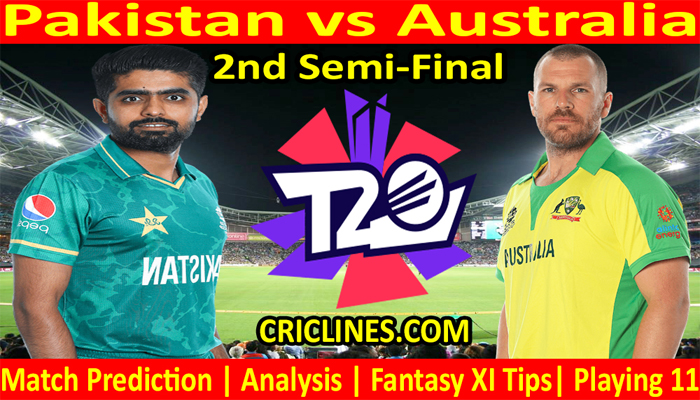 The world is ready to witness yet another big battle of World Cup T20. The 2nd Semi-Final of World Cup T20 2021 is scheduled to play between Pakistan and Australia on Thursday, 11th November 2021 at Dubai International Cricket Stadium, Dubai. We are posting safe, accurate, and secure today match prediction of ICC T20 World Cup free.

Many of us were hoping that we will have at least two Asian teams in the semi-finals but in the end, we have just one team which is Pakistan. Pakistan is the only team in this tournament that had not lost any match at the group stage. They had beaten all teams including India, New Zealand, and Afghanistan. The start of Australia to this ICC T20 World Cup was a bit slow but they are in good momentum now. You should know that Australia had never won T20 World Cup and this can be a huge chance for this team to have a T20 World Cup title to their name.

Pakistan had won all matches at the group stage of any format of World Cup for the first time in its cricketing history and the batting order of Pakistan played a key role in it. Babar Azam had been outstanding with the bat throughout this tournament and right now, he is the highest run-scorer of this edition of the ICC T20 World Cup. He had scored a total of 264 runs including four fifties and also has a good strike rate. Mohammad Rizwan is the other batter of Pakistan who had scored 214 runs with two fifties. We saw some power hitting from Shoaib Malik in the recent match against Scotland were scored 54 runs on just 18 balls. This is the fastest fifty in T20 cricket by any batsman from Pakistan.

Mohammad Hafeez also put some runs on the board in this tournament while Fakhar Zaman is the only batter who had totally failed to perform well. Asif Ali had improved his batting and had become a finisher for Pakistan. It was his six-hitting capability that Pakistan won the matches against New Zealand and Afghanistan. The bowling unit of Pakistan is in good shape and it will be difficult for the batting order of Australia to score some big runs against this team. Shaheen Afridi, Haris Rauf, Imad Wasim, and Shadab Khan had been good with the ball. Hasan Ali is the only bowler who had been underperforming but we had seen some kind of good bowling in recent two matches.

Australia had been outstanding in this big tournament and had won four out of five matches played at the group stage even they had a lot of problems right before the start of this edition of the ICC T20 World Cup. You may know that Australia is not a weak team and they can give a tough time to Pakistan in this match. Australia has more depth in bowling than batting. They have bowlers who are well settled in the conditions of Dubai. Adam Zampa, Josh Hazelwood, Pat Cummins, and Mitchell Starc are the dangerous bowlers of Australia.

The batting order of Australia had got some good momentum in the previous matches. David Warner, Mitchell Marsh, Aaron Finch, and Glenn Maxwell had scored runs in the most recent matches. David Warner was the highest run-scorer against West Indies where he scored 89 runs with the help of nine boundaries and four huge sixes. His strike rate was near about 160 which is outstanding in the big matches. Mitchell Marsh also showed some power hitting and scored 53 runs on 32 balls. The batting order of Australia had to perform if they have to win this match.

Pakistan had a good record while playing against Australia in T20 matches. They had played 23 matches where they won 13 while Australia won 9 matches. One match between these two teams was ended with no result.

Babar Azam, Shaheen Afridi, and Adam Zampa are the key players to watch in this match.

Pakistan is full of experienced and young players of the t20 format. The batting order of this team is also strong and some well-known hitters of the t20 format are part of the squad of this team, so the winning chances of today’s match for Pakistan have been increased. The equation of who will win today’s cricket match prediction and who will win the cricket match today is mentioned as under.

The 2nd Semi-Final of World Cup T20 2021 is going to be held at Dubai International Cricket Stadium, Dubai. We had observed in the previous matches played here that the pitch here at this venue is good for batting. The track is slower than the others we have seen and helps the spinners quite a bit. We are hoping that the surface is bound to get slower and be a bit more difficult for batting in this match. A score of 170 is going to be tough to chase.

Who Will Win Pakistan vs Australia, 2nd Semi-Final WTC 21