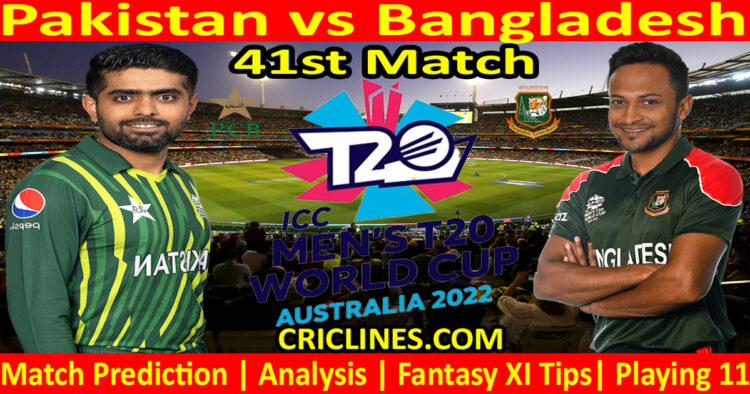 Cricket fans are ready to witness yet another big battle of the World Cup T20. The 41st match of World Cup T20 2022 is scheduled to play between Pakistan and Bangladesh on Sunday, 6th November 2022 at Adelaide Oval, Adelaide. We are posting a safe, accurate, and secure today match prediction of the ICC T20 World Cup 2022.

Pakistan beat South Africa in the previous match and still has little chance to qualify for the semi-finals but there are many if and buts for this. They have to win this match at any cost. They had played a total of four matches with two wins to their name. They had lost two matches and are holding the third position on the table of Super 12 Group 2. If South Africa loses their match against Netherlands, Pakistan can qualify and if India losses to Zimbabwe, Pakistan can also have some chances to qualify for the semi-finals.

Bangladesh is the other team that had played four matches with two wins to their name. They also lost two matches and are holding the fourth position on the points table. They are equal in point with Pakistan but have a poor net run rate. Remember that Bangladesh also has some chances to reach the semi-finals.

Pakistan lost both opening matches against India and Zimbabwe but now had won two matches in a row. They beat Netherlands by a handsome margin and beat South Africa in the previous match with a margin of 33 runs. They won the toss and decided to bat first. The top batting order of Pakistan totally collapsed in the previous match their middle and lower batting order gave the best performance. They lost the key wickets of Babar Azam, Mohammad Rizwan, Shan Masood, and Mohamamd Haris on a total of just 43 runs but the way how Iftikhar Ahmed and Shadab Khan performed in the previous match was just outstanding. Mohammad Haris was given a chance for the first time in this tournament and he performed well. He played the inning of 28 runs on just 11 balls. He smashed two boundaries and three huge sixes during his inning. Mohammad Rizwan and Babar Azam are key batters in the squad of Pakistan but they totally failed to give the best performance in this tournament.

Babar Azam is facing some form issues while Mohammad Rizwan scored some runs in the previous match against Netherlands. He also failed to give the best performance in the most recent match. Shadab Khan proved the most successful and highest run-scorer from their side scoring 52 runs on just 22 balls with the help of three boundaries and four huge sixes. Iftikhar Ahmed also had an outstanding performance with the bat and scored 51 runs. He faced 35 balls and smashed three boundaries and two huge sixes. The batting order of Pakistan also performed well in the previous match. They defended the target of 142 runs and leaked 108 runs in 14 overs. Shaheen Afridi was the most successful and highest wicket-taker from their side who picked three wickets in four overs against just 14 runs. Shadab Khan also had an outstanding performance with the ball and picked up two wickets in four overs while he was charged with 16 runs. Naseem Shah was the other bowler who gave the best performance in the previous match. He picked up one wicket in three overs against 19 runs. Mohammad Wasim Jr and Haris Rauf also picked one wicket each. Haris Rauf was the most expensive bowler who leaked 44 runs in three overs.

The most recent match of Bangladesh was very interesting against India where they lost by the margin of just five runs. That was also a rain-affected match and the second inning of this match was reduced to 16 overs. Bangladesh lost the toss and decided to field first. The performance of their bowling unit was not much impressive. They leaked 184 runs in 20 overs. No bowler from their side could stop the batting order of India from scoring runs. Hasan Mahmud was the highest wicket-taker from their side but he leaked a lot of runs. He picked up three wickets in four overs while he was charged with 47 runs. The skipper, Shakib Al Hasan also performed well with the ball and picked up two wickets in four overs against 33 runs. Taskin Ahmed, Shoriful Islam, and Mustafizur Rahman were the bowlers who failed to pick any wicket. Remember that Shoriful Islam leaked 57 runs in four overs.

The batting order of Bangladesh had totally failed to give the best performance in this tournament and we also saw this in the previous match. Litton Das was the only batter from their side who played his shorts freely. He was the most successful and highest run-scorer from their side with 60 runs to his name on just 27 balls with the help of seven boundaries and three huge sixes. Nurul Hasan was the other batter who put some big runs on the board. He remained not out after scoring 25 runs on 14 balls and smashed two boundaries and one huge six. Najmul Hossain Shanto scored 21 runs but he destroyed 25 balls and smashed one boundary and the same huge six. The skipper, Shakib Al Hasan scored 13 runs while Taskin Ahmed remained not out after scoring 12 runs. The batting order of Bangladesh had got some kind of momentum but their bowlers are not giving the best performance. Pakistan has a strong batting order in the side and the bowlers of Bangladesh should give the best performance.

Pakistan is full of experienced and young players in the t20 format. The batting order of this team is also strong and some well-known hitters of the t20 format are part of the squad of this team, so the winning chances of today’s match for Pakistan have been increased. The equation of who will win today’s cricket match prediction and who will win the cricket match today is mentioned as under.

The 41st match of World Cup T20 2022 is going to be held at Adelaide Oval, Adelaide. We had observed in the previous matches played here that the pitch here at this venue is good for batting. The pitch is bouncy and fast and run-scoring is not much easy in early and middle overs. We are hoping that the surface is bound to get slower and be a bit more difficult for batting in this match. A score of 170 is going to be tough to chase.

Who Will Win Pakistan vs Bangladesh, 41st Match World Cup 2022

Shaheen Afridi, Liton Das, and Shadab Khan are key players to watch in this match.