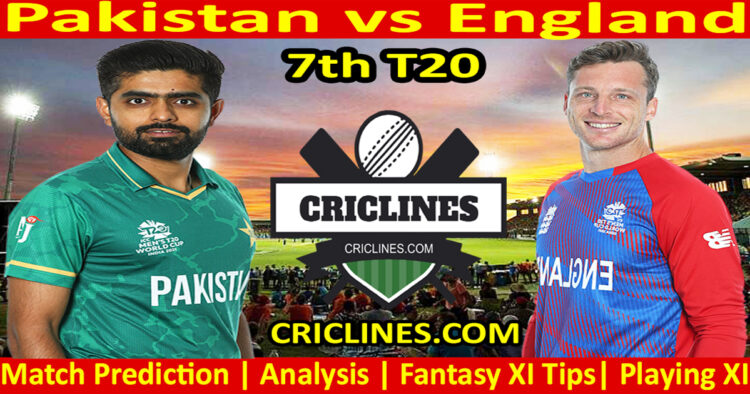 The cricket fans are ready to witness yet another big battle of T20 cricket. The 7th T20 match of the England tour of Pakistan, 2022 is scheduled to be held on Sunday 2nd October 2022 at Gaddafi Stadium, Lahore. We are providing 100 safe, perfect, and accurate today match prediction for all matches of Pakistan and England.

The series of seven T20 matches between Pakistan is England is now leveled with 3-3 and this match had become a decider. The winner of this match will lift the trophy of the series. Almost all matches of this series had been interesting. Both teams will pick the best players for this match.

Pakistan played the previous match without their key players like Mohammad Rizwan and Haris Rauf and we saw the result. They were struggling in batting and bowling. We think both players will be back on the team for this match. We can also expect a couple of changes in the final playing eleven of this match from the side of Pakistan.

Pakistan is struggling with the batting in this series and they are much dependent on Babar Azam and Mohammad Rizwan for run scoring. The middle batting order of Pakistan is still a big problem. Shah Masood, Haidar Ali, Iftikhar Ahmad, and Mohammad Asif had been struggling in this series. If Pakistan did not get a good opening start, they are surely going to face a lot of issues. Babar Azam showed his batting class in the previous match and become the first players who scored 3000 runs in short matches. The batting order of Pakistan will be tested once again as they will be under a lot of pressure in this match. Pakistan scored a total of 169 runs in 20 overs in the previous match. Run scoring in power play-overs is still a big issue for Pakistan. They scored just 48 runs in power play in the previous match and also lost two wickets.

Babar Azam proved the highest run-scorer in the previous match with 87 runs to his name on 59 balls with the help of seven boundaries and three huge sixes. Iftikhar Ahmed scored 31 runs while Haider Ali could manage to score 18 runs. Pakistan won the previous two matches due to the best bowling performance but they were dominated by the batters of England. Almost all bowlers of Pakistan leaked runs at an average of more than 10 runs per over. They will get some kind of strength with the addition of Haris Rauf who will replace Shahnawaz Dahani who is struggling in international cricket. The spin bowlers of Pakistan like Shadab Khan and Mohammad Nawaz are doing well in this series and Shadab Khan was the only bowler from the side of Pakistan who had wickets to his name. He picked two wickets in four overs against 34 runs. Aamer Jamal, Mohammad Wasim Jr, Shahnawaz Dahani, and Mohammad Nawaz were wicket-less.

England outclassed Pakistan in the previous match. They restricted the batters of Pakistan from scoring the big runs and were just outstanding while chasing. We are expecting some changes in the squad of England for this match. Mark Wood can join the playing eleven of this match. The bowling unit of England was good in the previous match where they leaked 169 runs in 20 overs on a pitch that was good for the batting. Sam Curran proved the most successful bowler from their side picking two wickets in four overs against 26 runs. David Willey was the other bowler who picked two wickets in four overs while he was charged for 32 runs. R Topley and Richard Gleeson picked one wicket each while Adil Rashid once again failed to pick any wicket.

The batting order of England played aggressive cricket in the previous match. They chased the target of 170 runs in just 14.3 overs. Almost all batters from their side were just outstanding. Remember that they scored 86 runs in power play overs. Philip Salt was the batter who scored runs against all bowlers of Pakistan. He also was the most successful and highest run-scorer from their side who remained not out after scoring 88 runs. He faced just 41 balls and smashed 13 boundaries and three huge sixes. Alex Hales also performed well and scored 27 runs on just 12 balls with the help of four boundaries and one huge six. Dawid Malan and Ben Duckett scored 26 runs each.

England had played 160 T20 matches right now with 84 wins to their name. They had lost 71 matches while their five matches ended with no result.

Pakistan had played 202 T20 matches right now with 124 wins to their name. They had lost 73 matches while their 5 matches ended with no result.

The 7th T20 match between Pakistan and England is going to be played at Gaddafi Stadium, Lahore. The pitch at this stadium is excellent for batting. The boundaries at this venue are short and will bring the spinners into play. The pitch will continue to be good for batting throughout the match.

The weather forecast in Lahore on match day is not very good. There are some chances of rain but that is possible that we may have an interrupted match.

Who Will Win Pakistan vs England 7th T20

Who Will Win Pakistan vs England 7th T20 Toss-PAK

Who Will Win Pakistan vs England 7th T20 Match-ENG

Dream11 prediction for Pakistan vs England. After checking the T20 player’s availability, the Dream 11 Team for this match of Pakistan and England is mentioned under.