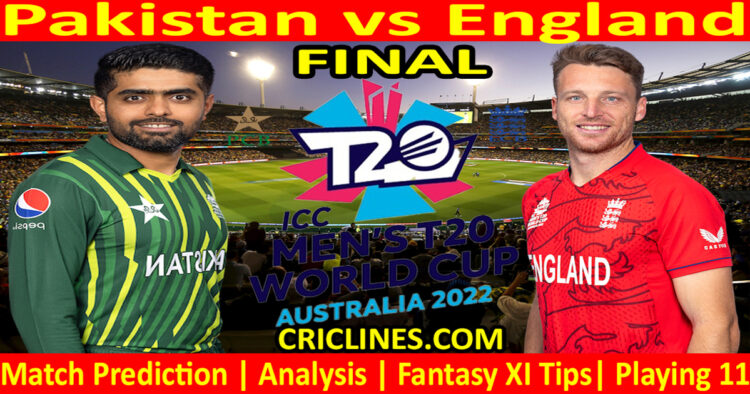 Cricket fans are ready to witness yet another big battle of the World Cup T20. The Final match of World Cup T20 2022 is scheduled to play between Pakistan and England on Sunday, 13th November 2022 at Melbourne Cricket Ground, Melbourne. We are posting a safe, accurate, and secure today match prediction of the ICC T20 World Cup 2022.

Pakistan and England did not start well in this season of the ICC T20 World Cup but now are in the final. Both teams suffered up sets as Pakistan was beaten by Zimbabwe and England lost their match against Ireland but now these losses are forgotten. Pakistan and England had played a lot of T20 cricket against each other and know their strengths and weaknesses. England had recently won a bilateral series which was played in Pakistan recently.

We are not expecting Pakistan in the semi-finals but their luck did the work and their win against Bangladesh cemented their place in the semi-finals. Pakistan should be thankful to the Netherlands which beat South Africa and cleared the roads for Pakistan. Pakistan dominated New Zealand in the semi-final and now are going to face England who had beaten India in the second semi-final.

England was good in the super 12 matches and was holding the second position on the points table of Super 12 Group 1. They played five matches with three wins to their name. They lost one match against Ireland while their one match against Australia was washed out by the rain. They had a historic win over India with a big margin of 10 wickets in the semi-final 2 and now are going to face Pakistan, which is not a strong team than India.

Pakistan was just outstanding in the semi-final 1 against New Zealand which was played in Sydney. This match was played on a pitch that has no extra bounce and the ball was also not swinging but spin bowlers got a lot of help. This match is going to be played in Melbourne where the conditions are not the same. Pakistan lost two matches against India and Zimbabwe which were played in Perth and Melbourne. We had observed that both venues have a lot of pace and bounce and the batters of Pakistan were struggling with these conditions. Short-pitched bowling had been very difficult for the batters of Pakistan to play. Mohammad Rizwan and Babar Azam are two leading batters of Pakistan who were struggling in the previous matches but they returned to good form in the previous match which is good news for the rest of the batters. Mohammad Haris was not given a chance in some opening matches but he had now played three matches and we think that he should be settled. He had played a good inning with a good strike rate. He plays his shorts freely without fear of losing his wicket. Shan Masood is the other batter who had been good in some early matches.

Iftikhar Ahmed and Shan Masood can play well in the conditions of Melbourne. We are sure that both batters will play the main role against England. The conditions in Melbourne are also not in the favor of Pakistani all-rounders like Mohammad Nawaz and Shadab Khan. Both players can be struggling if there is some pace and bounce on the surface of Melbourne. The bowling unit of Pakistan had been just amazing in this tournament. Shaheen Afridi was not giving his best but since some previous matches, he is back to good form. Remember that he had picked ten wickets in this tournament till now. We also know that he was wicketless in two opening matches. Haris Rauf is the other bowler who had been good, especially in the middle overs. Naseem Shah and Mohammad Wasim Jr. are good bowlers in the squad of Pakistan. Shadab Khan had been the most economical bowler from their side in this tournament. Mohammad Rizwan and Babar Azam scored the fifties in the previous match and had a partnership of 105 runs for the first wicket. We are sure that they will come to open the batting inning for Pakistan in this match and if they play an inning like that with a good strike rate, Pakistan will surely put a handsome total on the board. Shaheen Afridi was the highest wicket-taker in the previous match against New Zealand with two wickets to his name in four overs against just 24 runs while Mohammad Nawaz picked one wicket.

England almost crushed India in the semi-final 2 with a record margin of ten wickets. Thanks to Jose Buttler and Alex Hales who scored runs against each and every Indian bowler. This was the worst defeat for India in any T20 World Cup match. The target of 169 runs was not easy to chase at Adelaide Oval, Adelaide but Alex Hales and Jose Buttler did it. They batted well in conditions where the batting was not much easy. Now England is going to face Pakistan in different conditions and against the strongest bowling unit of this tournament. The bowlers of England are well known for the conditions of Melbourne Cricket Ground, Melbourne and we are sure that they will create a lot of problems for the batters of Pakistan with short balls. Mark Wood was not available for the semi-final against India but now he is fit and we are sure that he will be part of the final playing eleven. Chris Jordan was given a chance in place of Mark Wood and he played well. We can also expect Tymal Mills in the team for this match as he is a good pace bowler and can be difficult for the batters of Pakistan to play the shorts freely against him.

Liam Livingstone and Adil Rashid were good against Indian right-hand batters but Pakistan has some left-handers also and this can be very tricky for these bowlers. We think that Moeen Ali will also be used as a bowler in this match. Dawid Malan was not part of the team in the previous match and we are sure that they will be available for this match. We have no doubt that Alex Hales and Jose Buttler are two big batters on their side but will they repeat the form against Pakistan? this is still a big question. Phil Salt is the other batter who can be dangerous against the bowlers of Pakistan. Ben Stokes, Harry Brook, Liam Livingstone, and Moeen Ali make the batting order of England more dangerous. England had played a lot of T20 cricket in recent times and if they come as today match winner, they will also have to crown T20 cricket along with ODI cricket. Alex Hales was the highest run-scorer in the previous match with 86 runs to his name on just 47 balls with the help of four boundaries and seven huge sixes. The skipper, Jose Buttler scored 80 runs while he faced 49 balls and smashed nine boundaries and three huge sixes. Both openers of England remained not out till the chase of the target. Chris Jordan was the highest wicket-taker with three wickets to his name in four overs against 43 runs.

Pakistan had played 28 matches against England where they had won 9 matches while England had won 19 matches. One match between Pakistan and England came with no result.

The toss is playing an important role in the decision of all games of World Cup T20. Having a good total on the board is always a big advantage in these kinds of big matches. According to our toss prediction, the team who will win the toss may choose to bat first. Remember that a total of six matches of the ICC T20 World Cup had been played at this venue and all matches were won by the batting first team.

The Final match of World Cup T20 2022 is going to be held at Melbourne Cricket Ground, Melbourne. We had observed in the previous matches played here that the pitch here at this venue is good for batting. The pitch is bouncy and fast and run-scoring is not much easy in early and middle overs. We are hoping that the surface is bound to get slower and be a bit more difficult for batting in this match. A score of 180 is going to be tough to chase.

Who Will Win Pakistan vs England, Final Match World Cup 2022

Shaheen Afridi, Jose Buttler, and Babar Azam are key players to watch in this match.