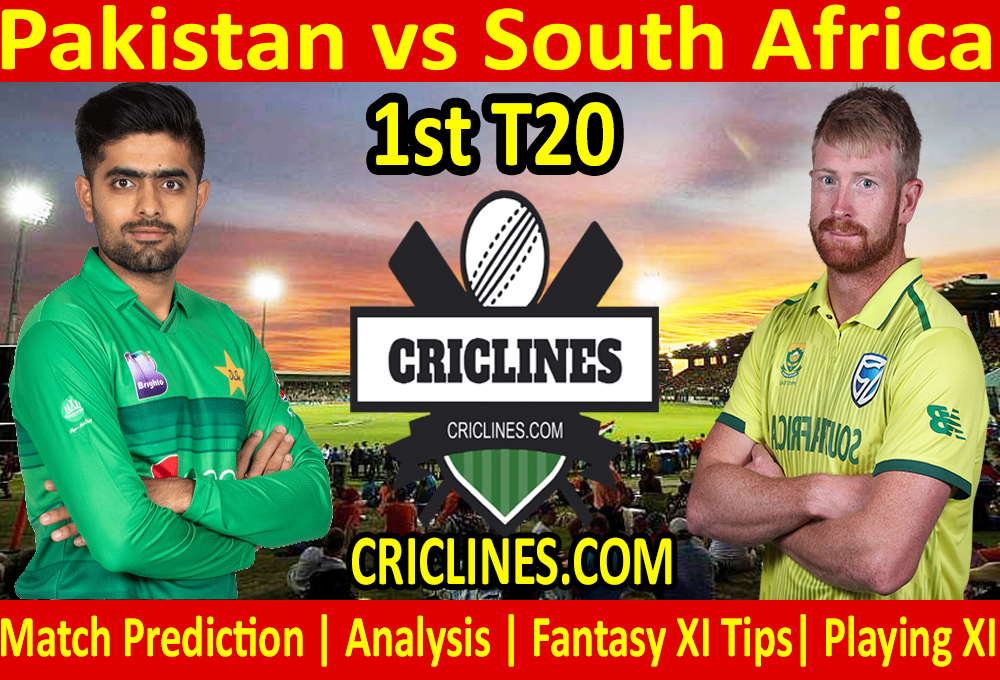 The cricket fans are ready to witness another big battle of the T20 cricket. The 1st T20 match of the South Africa tour of Pakistan is scheduled to be held on Thursday, 11th February 2021 at Gaddafi Stadium, Lahore. We are posting safe, secure, and accurate today match prediction of all matches of South Africa and Pakistan.

The Batting order of team Pakistan is strong at least on papers. The skipper, Babar Azam is known as one of the best batsmen in the T20 format of cricket. Asif Ali is known as a hard-hitter while Haider Ali and Khushdil Shah are part of the batting squad of Pakistan. Pakistan team has a lot of experienced all-rounder in their squad. Hussain Talat, Iftikhar Ahmed, Usman Qadir, Amad Butt, Danish Aziz, Faheem Ashraf, and Mohammad Nawaz are the key all-rounder in the squad. Mohammad Rizwan and Sarfraz Ahmed are the wicket-keep batsmen in the squad of team Pakistan. Pakistan had a strong bowling unit on its side. Hassan Ali is the leading bowling of team Pakistan who destroyed the batting order of South Africa in both test matches played earlier. Shaheen Shah Afridi, Haris Rauf, Aamir Yamin, Mohammad Hasnain, Zafar Gohar, and Zahid Mahmood are the key bowlers for team Pakistan.

South Africa had totally failed to compete with team Pakistan in the test series played earlier and had faced a clean sweep against Pakistan after a long time. Now, they are going to face a strong team in each and every department of the game in the series of three T20 matches. Heinrich Klaasen is going to lead team South Africa in this series of three T20 matches against Pakistan. The batting order of this team is also strong at least on papers. Reeza Hendricks, Janneman Malan, David Warner, and JJ Smuts are going to lead the batting order of South Africa.

George Linde, Jacques Snyman, Andile Phehlukwayo, and Dwaine Pretorius are the all-rounders who are part of the squad of South Africa for this series against Pakistan. Like the batting, the bowling unit of team South Africa is also strong at least on papers. Tabraiz Shamsi, Junior Dala, Nandre Burger, Okuhle Cele, Bjorn Fortuin, Lutho Sipamla, and Glenton Stuurman are going to leading the bowling department of team South Africa in this series of three matches against Pakistan.

Pakistan had played a total of 160 T20 matches where they won 98 and Opposing teams won 60 matches. Their 2 matches ended with no result.

South Africa had played 124 T20 matches. They won 71 matches while opposing teams won 52 matches. One match of South Africa was ended with no result.

The 1st match of this series and scheduled to be held at Gaddafi Stadium, Lahore. Pitch here in this stadium is a batting favored and with a little bit of bounce that may help the seamers. Spinners can play a key role in this pitch. As per the live cricket score, a total of near about 180 runs should be as par.

Who Will Win Pakistan vs South Africa 1st T20

Who Will Win Pakistan vs South Africa 1st T20 Toss-RSA

Who Will Win Pakistan vs South Africa 1st T20 Match-PAK