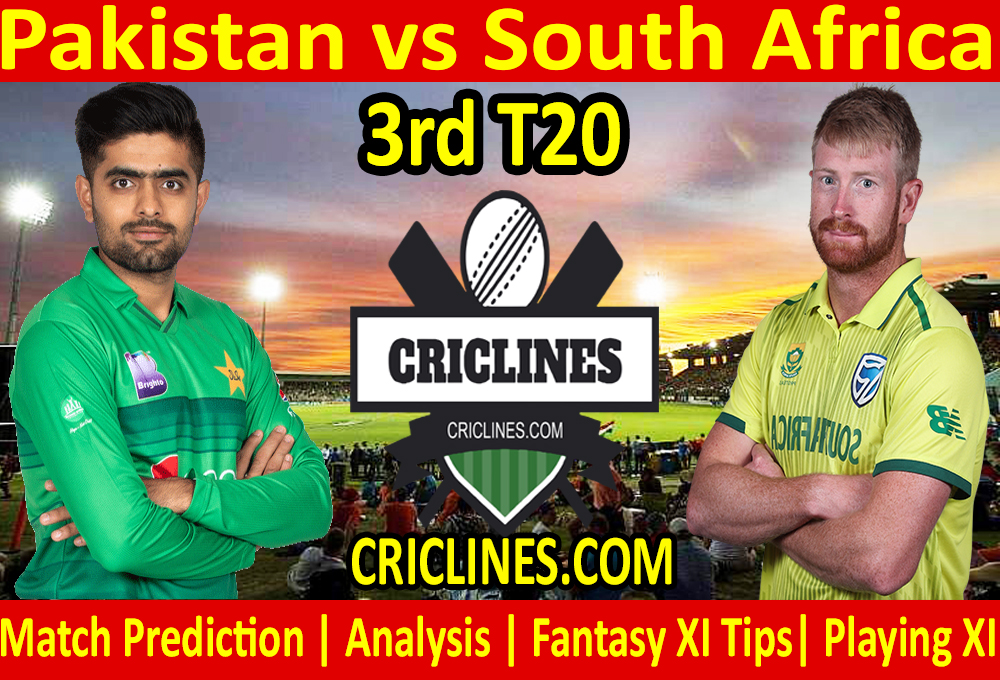 The cricket fans are ready to witness yet another big battle of the T20 cricket. The 3rd T20 match of the South Africa tour of Pakistan is scheduled to be held on Sunday, 14th February 2021 at Gaddafi Stadium, Lahore. We are posting safe, secure, and accurate today match prediction of all matches of South Africa and Pakistan.

This series of three T20 matches had entered an interesting situation and the third match had become a final match as a series is leveled with 1-1. After winning the first t20 match, Pakistan lost the 2nd match by the margin of six wickets. They lost the toss and were asked to bat first. The performance of their batting order was not much impressive. They could manage to score 144 runs in their inning of 20 overs. Mohammad Rizwan once again was the most successful and highest run-scorer from their side who scored 51 runs. He faced 41 deliveries and smashed six boundaries and one six. Faheem Ashraf also performed well with the bat. He scored 30 runs on just 12 deliveries with the help of two boundaries and the same huge sixes.

The top-order of Pakistan once again failed to put some runs on the board. The skipper, Babar Azam could manage to score just five runs while Haider Ali had just 10 runs to his name. Like the batting, the bowling unit of Pakistan also failed to give the best performance in the most recent match. They failed to defend the target of 145 runs and leaked this target in 16.2 overs. Shaheen Afridi was the only successful and highest wicket-taker from their side who picked two wickets in his three overs bowled out against 18 runs. Mohammad Nawaz picked one wicket in his four overs bowled out while had leaked 27 runs. Usman Qadir also picked one wicket but he leaked plenty of runs. He was charged for 43 runs in his four overs bowled out.

South Africa lost the open t20 match against Pakistan but had a strong comeback in the second match and won that match with a handsome margin of six wickets. They won the toss and decided to field first. The way how their bowling unit performed in that match was just outstanding. They leaked 144 runs in their inning of 20 overs. Dwaine Pretorius was the most successful and highest wicket-taker from their side who picked five wickets in his four overs bowled out against just 17 runs. Andile Phehlukwayo also picked one wicket in his three overs bowled out while he was charged for 31 runs. Tabraiz Shamsi also had an outstanding performance with the ball. He picked one wicket in his four overs bowled out while he leaked 16 runs.

Like the bowling, the batting order of South Africa also had an outstanding performance in the previous match. They chased the target of 145 runs in 16.2 overs. Reeza Hendricks was the most successful batsman from their side who scored 42 runs on 30 deliveries with the help of three boundaries and the same huge sixes. Pite van Biljon also had an outstanding performance with the bat in the previous match. He scored 42 runs while he faced 32 deliveries and smashed three boundaries and two sixes. David Miller remained not out after scoring 25 runs. He faced 19 deliveries and smashed two boundaries and one six. The skipper, Heinrich Klaasen remained not out after scoring 17 runs.

Pakistan had played a total of 162 T20 matches where they won 99 and Opposing teams won 61 matches. Their 2 matches ended with no result.

South Africa had played 126 T20 matches. They won 72 matches while opposing teams won 53 matches. One match of South Africa was ended with no result.

The 1st match of this series and scheduled to be held at Gaddafi Stadium, Lahore. Pitch here in this stadium is a batting favored and with a little bit of bounce that may help the seamers. Spinners can play a key role in this pitch. According to the live cricket score, the target of near about 180 runs should be as par.

Who Will Win Pakistan vs South Africa 3rd T20

Who Will Win Pakistan vs South Africa 3rd T20 Toss-RSA

Who Will Win Pakistan vs South Africa 3rd T20 Match-PAK