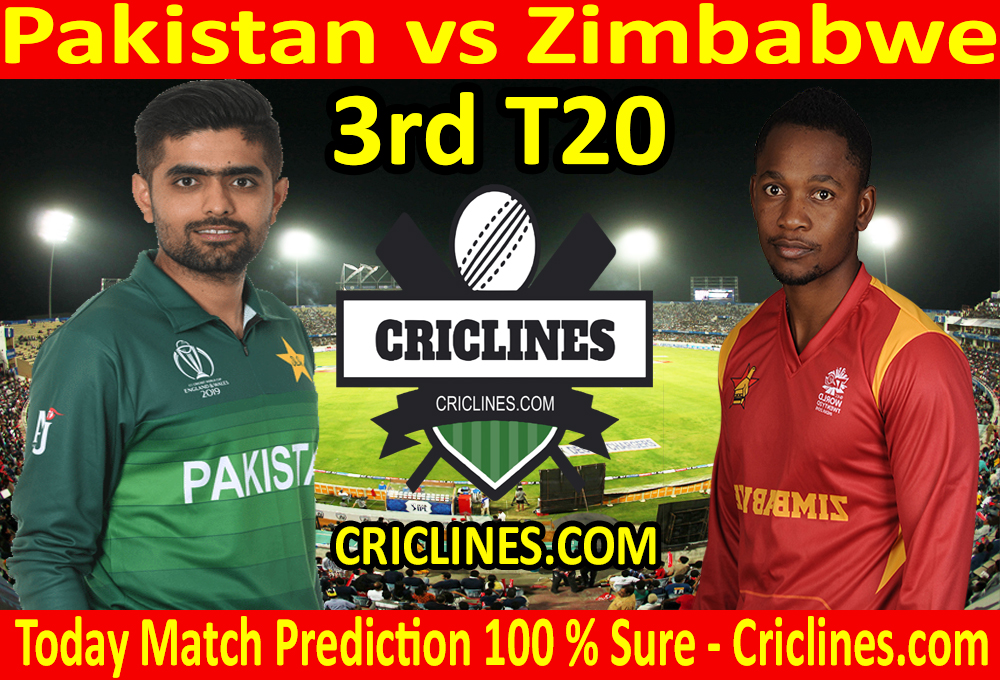 The cricket fans are ready to witness yet another big battle of the T20 cricket. The 3rd T20 match of Zimbabwe tour of Pakistan, 2020 is scheduled to be held on Tuesday, 10th November 2020 at Rawalpindi Cricket Stadium, Rawalpindi. We are posting safe, secure, and accurate today match prediction of all matches of Zimbabwe and Pakistan.

Pakistan had won this series of three T20s against Zimbabwe and now they are marching to have a clean sweep. They won the second T20 match with a margin of eight wickets. They won the toss and put Zimbabwe to bat first. The performance of the bowling unit of Pakistan was good in the previous match. They leaked 137 runs in their inning of 20 overs. Usman Qadir was the most successful bowler from their side who picked three wickets in his four overs bowled out against 21 runs. Haris Rauf also had an outstanding performance with the ball. He picked three wickets in his four overs bowled out while he was charged for 31 runs. Faheem Ashraf picked one wicket while Mohammad Hasnain and Wahab Riaz failed to pick any wicket.

The batting order of Pakistan also performed well in the previous match. They chased the target of 135 runs in 15.1 overs. Haider Ali was the highest run-scorer from their side who remained not out after scoring 66(43) runs with the help of six boundaries and three huge sixes. The skipper, Babar Azam also had an outstanding performance with the bat. He scored his consecutive half-century in that match. He had broken the record of Rohit Sharma of the fastest half-centuries. Now, he is the second player who had scored more half-centuries in the fewer matches. Virat Kohli is the number one batsman who had scored most half-centuries and Babar Azam is following him at number two. He scored 51(28) runs and smashed eight boundaries and one six. Khushdil Shah remained not out after scoring 11 runs.

The performance of Zimbabwe had not been impressive in this T20 series against Pakistan. They had lost both matches and now have the threat of wight wash. They lost the second match by the margin of 8 wickets against Pakistan. They lost the toss and were asked to bat first. The performance of their batting order was not impressive in that match. They could manage to score 134 runs in their inning of 20 overs. Ryan Burl was the highest run-scorer from their side with 32(22) runs to his name with the help of one boundary and the same six. He remained not out till the end of the inning. Madhevere scored 24 runs while Chigumbura could manage to score 15 runs.

The bowling unit of Zimbabwe also failed to give their best performance in the previous match. They failed to defend the target of 135 runs and were charged for the target in 15.1 overs. Blessing Muzarabani was the only most successful and the highest wicket-taker from their side who picked two wickets in his four overs bowled out while he was charged for 33 runs. Richard Ngarava, Donald Tiripano, Tendai Chisoro, Sean Williams, and Sikandar Raza were the bowlers who failed to pick any wicket.

Pakistan had played a total of 156 T20 matches where they won 96 and Opposing teams won 58 matches. Their 2 matches ended with no result.

Pakistan had faced Zimbabwe in 13 T20 matches where Pakistan won all 13 matches and Zimbabwe had never won against Pakistan in any T20 match.

The 1st match of this series and scheduled to be held at Rawalpindi Cricket Stadium, Rawalpindi. Pitch here in this stadium is a batting favored and with a little bit bounce that may help the seamers. Spinners can play a key role in this pitch. A score of near about 180 runs should be as a par.

Who Will Win Pakistan vs Zimbabwe 3rd T20

Who Will Win Pakistan vs Zimbabwe 3rd T20 Toss-ZIM

Who Will Win Pakistan vs Zimbabwe 3rd T20 Match-PAK