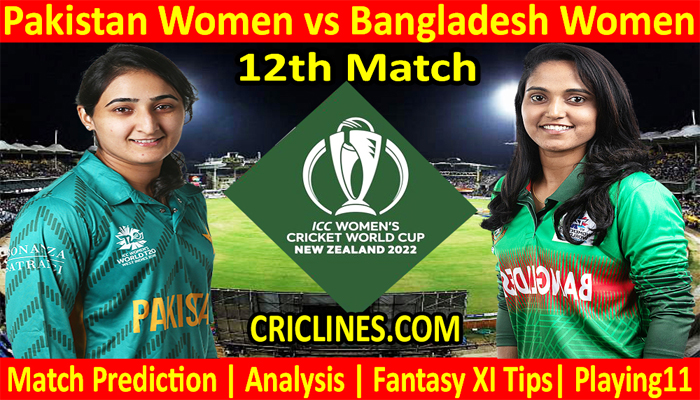 The world is ready to witness yet another big battle of Women’s ODI cricket. The 12th match of Women’s World Cup 2022 is scheduled to play between Pakistan Women and Bangladesh Women on Monday, 14th March 2022 at Seddon Park, Hamilton. We are posting safe, accurate, and secure today match prediction of world cup free.

Pakistan Women are the worst-performing team of this tournament right now. They had played three matches till now and are still searching for a win as they had lost all three matches played till now. They are laying at the bottom of the points table. On the other side, Bangladesh Women also had not won any match. They had lost their both played matches so far and are situated at the second position from the bottom of the points table.

The most recent match of Pakistan Women was very interesting which they lost by the margin of six runs against South Africa. They won the toss and decided to field first. The performance of their batting order was good. They leaked 223 runs in their inning of 20 overs. Fatima Sana was the most successful bowler from their side who picked three wickets in her ten overs bowled out against 43 runs. Ghulam Fatima also picked three wickets while she was charged for 52 runs in her nine overs bowled out.

Diana Baig and Nashra Sandhu picked one wicket each. The performance of the batting order of Pakistan was good but they failed to chase the target of 224 runs and scored and their full team came back to the pavilion in 49.5 overs. Omaima Sohail was the most successful and highest run-scorer from their side who scored 65 runs on 104 deliveries with the help of seven boundaries. Nida Dar scored 55 runs while Nahida Khan had 40 runs to her name.

The previous match of Bangladesh Women against New Zealand Women was rain-affected which was reduced to 27 overs per side. They lost the toss and were asked to bat first. The performance of their batting order was not much impressive. They could manage to score 140 runs in their inning of 27 runs. Fargana Hoque was the most successful and highest run-scorer from their side who scored 52 runs. She faced 63 balls and smashed just one boundary during her inning.

Shamima Sultana scored 33 runs. The bowling unit of Bangladesh failed to defend a low target on the board and leaked the target of 141 runs in just 20 overs. Salma Khatun was the only bowler from their side who had a wicket to her name. Jahanara Alam, Fariha Trisna, Nahida Akter, Ritu Moni, Rumana Ahmed, and Lata Mondal were the bowlers who failed to pick any wicket.

The 12th match of Women’s ODI World Cup 2022 will be played at Seddon Park, Hamilton. The pitch here at this stadium has something in it for both batsmen and bowlers. It is typically a little slow and low but very flat. The pace bowlers have very little to work with and it is the slower bowlers that will be the bigger threat.

Check out the Dream11 lineup for the 20th Women’s ODI World Cup match to be played between Pakistan Women vs Bangladesh Women.

We had provided you with the above-mentioned Women World Cup prediction on the basis of our research, understanding, and analysis. These prediction tips are also based on the reports which we have from our different sources. You can consider the point we had provided you and in the end, the final decision will be yours.