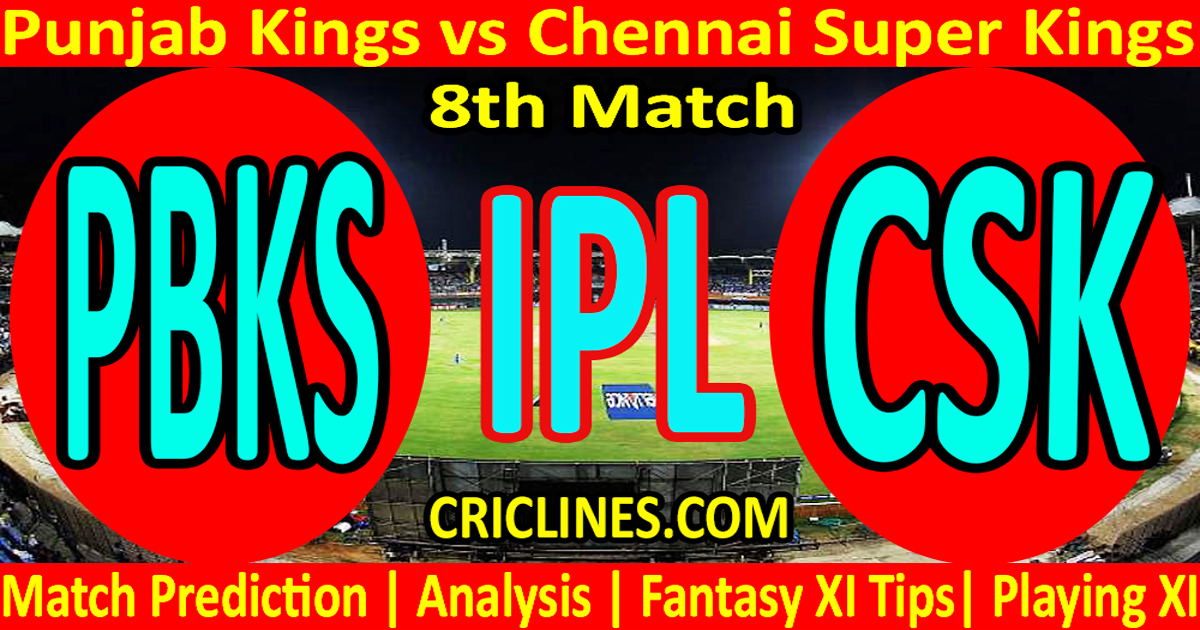 The world is ready to witness yet another big battle of the IPL T20. The 8th Match of the Indian Premier League is scheduled to play between Punjab Kings and Chennai Super Kings on Friday, 16th April 2021 at Wankhede Stadium, Mumbai. We are posting safe, accurate, and 100% secure today match prediction for all matches of IPL T20 free.

Punjab Kings have a strong batting order in the squad and we the demo in their very first match. Now they are going to play at the Wankhede Stadium which is famous as a high-scoring venue. The players like Chris Gayle, Deepak Hooda, Nicholas Pooran, Shahrukh Khan, Mayank Aggarwal, and the skipper, KL Rahul will love to bat at this venue. KL Rahul proved the highest run-scorer in the previous match. He scored 91 runs with a strike rate of 182 with the help of seven boundaries and five sixes. Deepak Hooda also showed that he is in excellent form. He smashed the inning of 64 runs on just 28 balls. He hit four boundaries and six huge sixes. Chris Gayle also showed that why he is called the universe boss. He had 40 runs to his name. Pooran came to bat in the last overs but failed to put some runs on the board.

Jhye Richardson comes to bat at number seven but Punjab Kings have the best batsmen till number six. Punjab Kings have no issues in batting order they had been poor in the bowling department in some previous editions of IPL and we also observed this in their very first match of this season. The total of 222 runs is easily defendable in 20 overs but it was looking at one stage that they will fail to defend this huge total. They were also poor in the fielding as they dropped near about four catches. Arshdeep Singh was the only bowler who played a key role to reduce the required run rate. He picked three wickets in his four overs against 35 runs. Mohammed Shami had two wickets to his name. Murugun Ashwin, Riley Meredith, Arshdeep Singh, Mohammad Shami, and Jhye Richardson are available to handle the bowling department and they also need to bowl with the right line and length to stop the strong batting orders of other teams from scoring the runs.

Chennai Super Kings is the team who had the most seniors players in their squad. Imran Tahir, MS Dhoni, Ambati Rayudu, FAF du Plessis, and even Suresh Raina are at the end of their career and we can not expect more from these players. Suresh Raina missed the whole previous season of IPL and had a superb comeback with 54 runs to his name in the first match. Sam Curran was the other player who played a smashing inning with the bat in the opening match. He scored 34 runs on just 15 deliveries with the help of four boundaries and two sixes. Moeen scored 36 runs while Ravindra Jadeja remained not out after scoring 26 runs. Will the key players of CSK get back into the form, this is a huge question mark and we will have the answer in this match.

The bowling department of Chennai Super Kings failed to have a good start to this tournament. The target of 189 runs was defendable to the pitch of Wankhede Stadium but they failed to pick early wickets. If you pick your first wicket on a total of 138 runs, you can not defend the target of even 200 runs. Shardul Thakur was the bowler from CSK in the opening match who picked the most wickets but he also leaked plenty of runs. He picked two wickets against 53 runs in four overs. Dwayne Bravo picked one wicket while no other bowler from CSK could manage to pick any wicket. We think that Lungi Nigidi and Behrendorff will not available for the selection for the final playing eleven team and if this happens, things will be more difficult for CSK to set up the bowling squad. Deepak Chahar, Sam Curran, Ravindra Jadeja, and Moeen Ali also need to give their best in this match against the strong batting order of the Punjab Kings.

Punjab Kings is overall a strong team than Chennai Super Kings. They have the best players in the t20 format. The batting order of this team is also strong and some well-known hitter of t20 format is part of the squad of this team, so the winning chances of today match for Punjab Kings have been increased. The equation of who will win today cricket match prediction and who will win the cricket match today is mentioned as under.

The 8th Match of IPL T20, 2021 is going to be held at the Wankhede Stadium, Mumbai. We had observed in the previous matches played here that the pitch here at this venue is good for batting in early overs. The track is slower than the others we have seen and helps the spinners quite a bit. We are hoping that the surface is bound to get slower and be a bit more difficult for batting in the last overs this match. A score of 185 seems to be a par score.

Dream11 fantasy team lineup prediction for Punjab Kings vs Chennai Super Kings 8th Match IPL 2021. After checking the latest players’ availability, which players will be part of both teams, the possible tactics that the two teams might use as we had learned from previous seasons of the Indian Premier League to make the best possible Dream11 team.