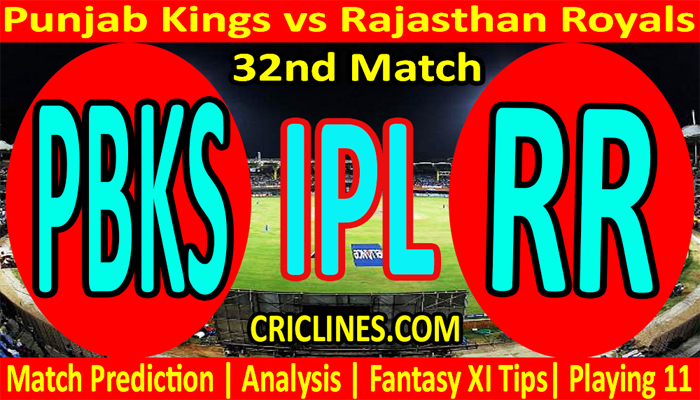 The cricket fans are ready to witness yet another big battle of the IPL T20. The 32nd Match of the Indian Premier League is scheduled to play between Punjab Kings and Rajasthan Royals on Tuesday, 21st September 2021 at Dubai International Cricket Stadium, Dubai. We are posting safe, accurate, and 100% secure today match prediction for all matches of IPL T20 free.

Punjab Kings had won just three out of eight matches played in the first half of IPL 2021. They had lost five matches and are situated at the 6th position on the points table. On the other hand, Rajasthan Royals had played seven matches with three wins to their name. They had lost four matches and are holding the 5th spot on the points table of IPL 2021.

Punjab Kings are going to play the first match in the conditions of Dubai. Like all other teams, Punjab Kings will also miss some of their key players in this second leg of IPL 2021. The skipper, KL Rahul has a big responsibility on his shoulders to lead the batting order with Mayank Agarwal, Sarfraz Khan, Chris Gayle, Dawid Malan, and Aiden Markram. Deepak Hooda, Fabian Allen, and Nicholas Pooran are also available to handle the batting order of the Kings.

Arshdeep Singh was successful in the first half of this tournament which was played in India. We are sure that he will also play a key role in the bowling department of Kings in the conditions of UAE. Mohammad Shami, Shahrukh Khan, Chris Jordan, Adil Rasheed, Murugan Ashwin, and Ravi Bishnoi are also available for the selection in this match.

Rajasthan Royals were not in a good position in the first half of IPL and now they have a chance to fill the gaps and come back strongly in the remaining matches. The skipper of this team, Sanju Samson was the highest run-scorer in the first leg of IPL and we are hopeful that he will continue his good form in Dubai. Riyan Parag was the other player who was good with the bat in the conditions of India. David Miller, Evin Lewis, and Rahul Tewatia have a to perform well in the second half of IPL.

We are not sure that Liam Livingstone and Ben Stokes are available for this match or not. If both players are not available, this will not be a good sign for the Royals. The presence of Glenn Phillips and Jose Buttler is also unconfirmed. Tabraiz Shamsi, Mustafizur Rahman, Kartik Tyagi, Kuldip Yadav, Chris Morris, and Shivam Dube will be taking care of the bowling department of Rajasthan Royals

Punjab Kings had won two out of five most recent matches played while Rajasthan Royals had won three out of five recently played matches.

Rajasthan Royals is overall a strong team than Punjab Kings. They have the best players of the t20 format. The batting order of this team is also strong and some well-known hitters of the t20 format are part of the squad of this team, so the winning chances of today’s match for Rajasthan Royals have been increased. The equation of who will win today’s cricket match prediction and who will win the cricket match today is mentioned as under.

The 32nd Match of IPL T20, 2021 is going to be held at the Dubai International Cricket Stadium, Dubai. We had observed in the previous matches played here that the pitch here at this venue is good for batting in early overs. We had seen a total score of near about 220 runs in the most recent three matches played here. The track has a good amount of pace and bounce which allows the batsmen for the good cricketing shorts but this ground also has big boundaries which can be a plus point for the bowlers. A score of 180 plus seems to be a par score.

KL Rahul, David Malan, and Sanju Samson are the key players to watch in this match.

Dream11 fantasy team lineup prediction for Punjab Kings vs Rajasthan Royals 32nd Match IPL 2021. After checking the latest player’s availability, which players will be part of both teams, the possible tactics that the two teams might use as we had learned from previous seasons of the Indian Premier League to make the best possible Dream11 team.

We had provided you the above-mentioned IPL prediction on the basis of our research, understanding, and analysis. These prediction tips have also been based on the reports that we have from our different sources. You can consider the point we had provided you and in the end, the final decision will be yours.