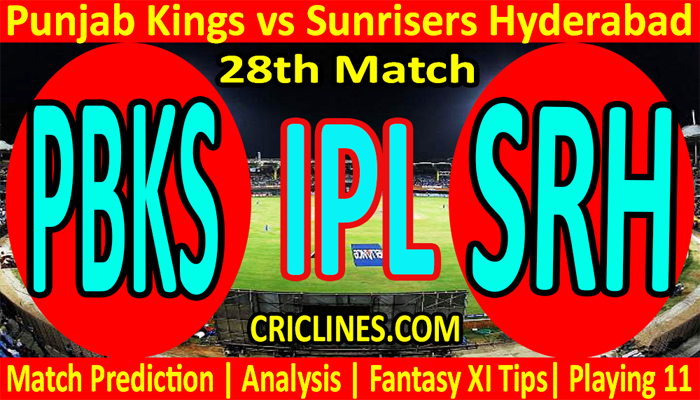 The cricket fans are ready to witness yet another big battle of the IPL 2022. The 28th match of the Indian Premier League 2022 is scheduled to play between Punjab Kings and Sunrisers Hyderabad on Sunday, 17th April 2022 at Dr. DY Patil Sports Academy, Mumbai. We are posting safe, accurate, and 100% secure today match prediction of IPL T20 2022.

PBKS is the third-best performing team of IPL 2022 right now. They had played five matches with three wins to their name. They had lost two matches and are situated at the third position on the points table. They had beaten the most successful team in the history of IPL, Mumbai Indians in their previous match with a handsome margin. SRH lost two early matches in IPL 2022 but had won three matches in a row. Now they had also played five matches. They had lost two and won three matches. They had moved to the seventh position on the table after their most recent win against KKR. Both teams are doing well in IPL 2022 and this match is going to be very interesting.

PBKS picked some best players in IPL 2022 auctions and we are seeing the results of it. They had a good combination of batting and bowling. Mayank Agarwal, Shikhar Dhawan, Jonny Bairstow, Liam Livingstone, Jitesh Sharma, and Shahrukh Khan are the star batters of Punjab. They did well in the previous match and scored about 200 runs in the previous match against Mumbai. They had a good opening start of 97 runs for the partnership of the first wicket. Dhawan was the highest run-scorer from their side who scored 70 runs on just 50 balls with the help of five boundaries and three huge sixes. Mayank Agarwal also performed well with the bat. He scored 52 runs while he faced 32 balls and smashed six boundaries and two huge sixes. Jitesh Sharma remained not out after scoring 32 runs. The batting order of PBKS is performing well and we are sure they will do well in this match.

The bowling department of Punjab had been good in IPL 2022 and they had played a key role in each and every win for the team. Kagiso Rabada, Arshdeep Singh, Odean Smith, Liam Livingstone, Rahul Chahar, and Vaibhav Arora are the leading bowlers of PBKS. They did well in the previous match against Mumbai and defended the target of 199 runs but leaked a lot of runs. They were charged for 186 in 20 overs. Odean Smith was the most successful and highest run-scorer from their side who picked four wickets in three overs bowled out against 30 runs. Kagiso Rabada also had an outstanding performance in the previous match. He picked two wickets in his four overs bowled out while he was charged for 29 runs. Vaibhav Arora picked one wicket but he leaked plenty of runs. He was charged for 43 runs in four overs. Arshdeep Singh, Rahul Chahar, and Liam Livingstone were the bowlers who failed to pick any wicket against Mumbai.

Hyderabad had beaten the best performing team of IPL 2022, KKR in their most recent match. The bowling department of SRH was not performing well in the opening matches but they are back to good form and had done well in the most recent matches. They used six bowlers against Kolkata and leaked 175 runs in 20 overs. Shashank Singh, Bhuvneshwar Kumar, Marco Jansen, T Natarajan, Umran Malik, and J Suchith are leading the bowling department of SRH in a good way. We don’t think that they are going to change the bowling department in some next matches. T Natarajan was the highest wicket-taker with three wickets to his name in four overs against 37 runs. Umran Malik had been the fastest bowler in IPL 2022 but he was not picking wickets. He picked two wickets in the previous match against Kolkata in four overs while he leaked 27 runs.

Bhuvneshwar Kumar, J Suchith, and Marco Jansen picked one wicket each while Shashank Singh failed to pick any wicket. The batting order of Hyderabad was also under pressure in the opening matches but they had made some key changes in the batting order and this is working now in a good way. They chased the target of 176 runs in just 17.5 overs. Aiden Markram, Rahul Tripathi, Abhishek Sharma, Nicholas Pooran, and Kane Williamson are the key batters of SRH and had been good in the last three matches. Rahul Tripathi was the most successful batter in the previous match with 71 runs to his name. He faced 37 balls and smashed four boundaries and six huge sixes during his inning. Aiden Markram was the other batter who put some big runs on the board. He remained not out after scoring 68 runs on just 36 balls with the help of six boundaries and four huge sixes during his inning.

Punjab had faced Hyderabad in 18 matches where they had won 6 matches and Hyderabad had won 12 matches.

Punjab Kings had won three out of the most recent five matches they had played while Sunrisers Hyderabad had won also three out of five recently played matches.

Punjab Kings is overall a strong team when we compare with Sunrisers Hyderabad. They have the best players in the t20 format of cricket. The batting order of this team is also strong and some well-known hitters of the t20 format are part of the squad of this team, so the winning chances of today’s match for Punjab Kings have been increased. The equation of who will win today’s cricket match prediction and who will win the cricket match today is mentioned as under.

The 28th match of IPL T20, 2022 is going to be held at the Dr. DY Patil Sports Academy, Mumbai. We had observed in the previous matches played here that the pitch here at this venue is good for batting in early overs. The track has a good amount of pace and bounce which allows the batsmen to the good cricketing shorts but this ground also have big boundaries which can be a plus point for the bowlers. A score of 190 plus seems to be a par score.

Aiden Markram, Rahul Tripathi, and Odean Smith are the key players to watch in this match.

Dream11 fantasy team lineup prediction for Punjab Kings vs Sunrisers Hyderabad 28th Match IPL 2022. After checking the latest player’s availability, which players will be part of both teams, the possible tactics that the two teams might use as we had learned from previous seasons of Indian Premier League to make the best possible Dream11 team.

We had provided you with the above-mentioned IPL prediction on the basis of our research, understanding, and analysis. These prediction tips have also been based on the reports that we have from our different sources. You can consider the point we had provided you and in the end, the decision will be yours that you have to make at your own risk.