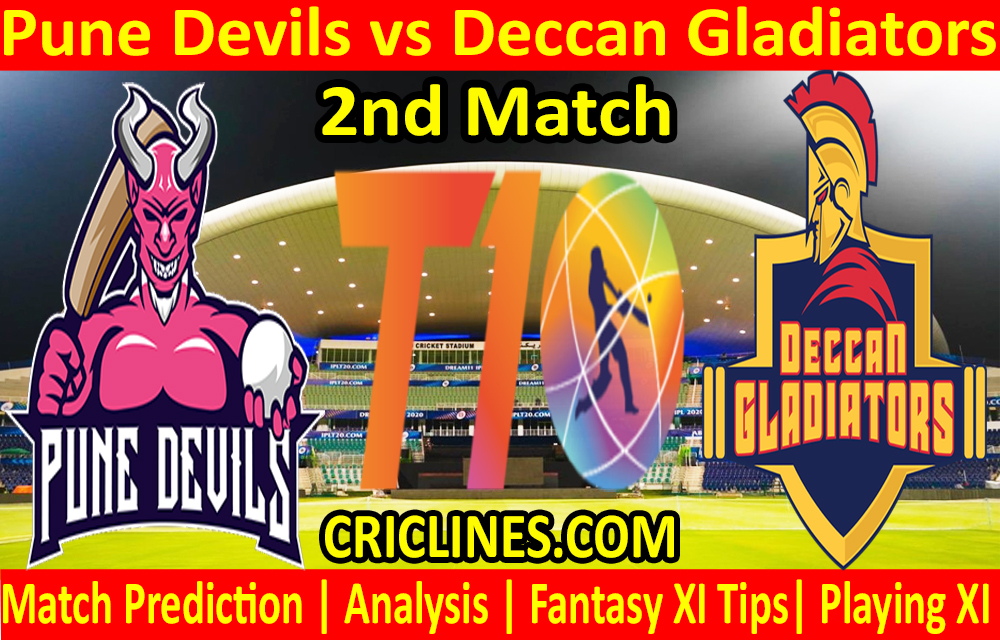 The world is ready to witness yet another big battle of the T10 League. The 2nd Match match of the T10 League is scheduled to play between Pune Devils and Deccan Gladiators on Thursday, 28th January 2021 at Sheikh Zayed Stadium, Abu Dhabi. We are posting safe, accurate, and secure today match prediction for all matches of Abu Dhabi T10 League free.

Pune Devils were the worst-performing team of the previous season of the T10 League. They could manage to win just one out of three matches at the first stage and won just one out of six matches. They were laying at the bottom of the points table after the end of league stage matches. Some key changes had been made in the final squad of this team. Mohammad Amir, Sam Billings, Ajantha Mendis, Thisara Perera, Malinda Pushkapumara, Darwish Rasooli, and Chadwick Walton are the key players of the Pune Devils.

Deccan Gladiators performed well in the previous edition of the T10 League. They won three out of six matches played at the league stage. The squad of this team for this season is strong at least on papers. Wanindu Hasaranga, Colin Ingram, Azam Khan, Zahoor Khan, Lahiru Kumara, Sunil Narine, Kieron Pollard, Bhanuka Rajapaksa, Mohammad Shahzad, and Imran Tahir are part of the squad of this team.

The 2nd Match match of the T10 League is going to be played at Sheikh Zayed Stadium, Abu Dhabi. This venue has one of the flattest and completely dead tracks we have seen in the past. We are expecting a slow, flat, and good batting surface for this match. As per the live cricket score, a total of more than 120 runs should be a par score.

The dream11 team prediction for Pune Devils vs Deccan Gladiators 2nd Match match T10 League. After checking the latest players’ availability, which players will be part of both teams, the possible tactics that the two teams might use as we had learned from previous seasons of T10 League to make the best possible Dream11 team.