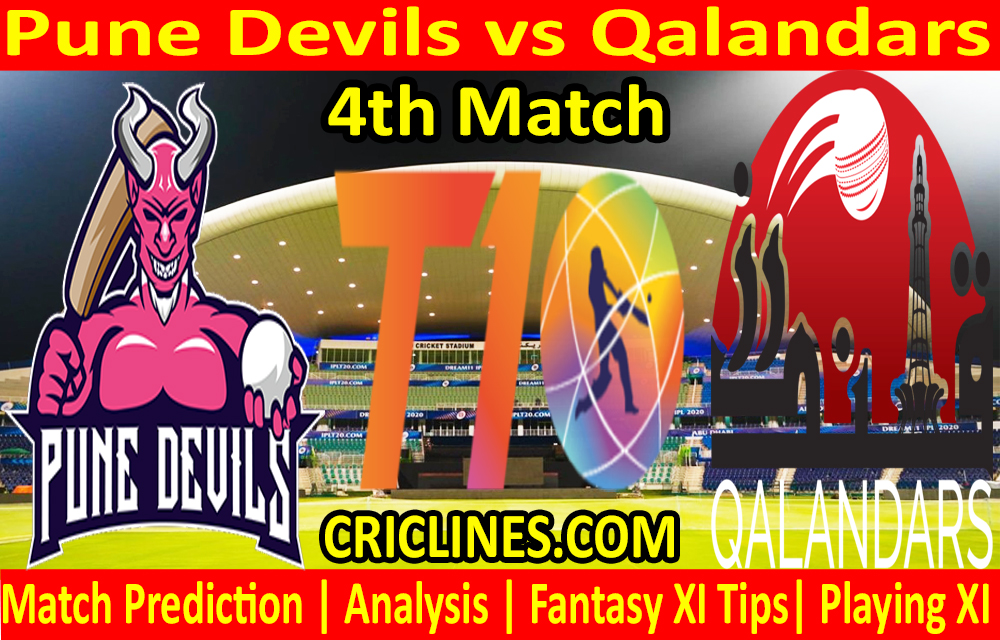 The world is ready to witness yet another big battle of the T10 League. The 4th Match match of the Abu Dhabi T10 League is scheduled to play between Pune Devils and Qalandars on Friday, 29th January 2021 at Sheikh Zayed Stadium, Abu Dhabi. We are posting safe, accurate, and secure today match prediction for all matches of Abu Dhabi T10 League free.

Pune Devils had a superb start to this 4th edition of the Abu Dhabi T10 League and had won the opening match of this tournament against Deccan Gladiators by the margin of seven wickets. They won the toss and decided to field first. The performance of their bowling unit was good in that match. They leaked 104 runs in their inning of 10 overs. The skipper, Nasir Hossain was the highest wicket-taker from their side who picked three wickets in his two overs bowled out against 18 runs. Munis Ansari also performed well with the ball. He picked two wickets in his two overs bowled out while he was charged for just 11 runs.

Like the bowling, the batting order of Pune Devils also performed well in their very first match of this tournament. They chased the target of 105 runs in 9.2 overs. Kennar Lewis was the most successful and highest run-scorer from their side who scored 57 runs on 28 deliveries with the help of three boundaries and six huge sixes. Chadwick Walton scored 18 runs while Tom Kohler-Cadmore had 12 runs to his name.

Qalandars was the second-best performing team of the previous season of the T10 League till the league stage but they were beaten by Deccan Gladiators in the Qualifier 2 match. The squad of this team is strong at least on papers. The players like Shahid Afridi, Sohail Akhtar, Asif Ali, Hasan Ali, Tom Banton, Ben Dunk, Chris Jordan, Sharjeel Khan, Azmatullah Omarzai, Samit Patel, Phil Salt, and Sohail Tanvir are part of the squad of this team.

Qalandars failed to give their outstanding performance in the previous season of this tournament but they had acquired the services of the best players, so the winning chances of today match for Qalandars have been increased. The equation of who will win today cricket match prediction and who will win the cricket match today is mentioned as under.

The 4th Match match of the T10 League is going to be played at Sheikh Zayed Stadium, Abu Dhabi. This venue has one of the flattest and completely dead tracks we have seen in the past. We are expecting a slow, flat, and good batting surface for this match. According to the live cricket score, the target of more than 130 runs should be a par score.

The dream11 team prediction for Pune Devils vs Qalandars 4th Match match T10 League. After checking the latest players’ availability, which players will be part of both teams, the possible tactics that the two teams might use as we had leaned from previous seasons of T10 League to make the best possible Dream11 team.