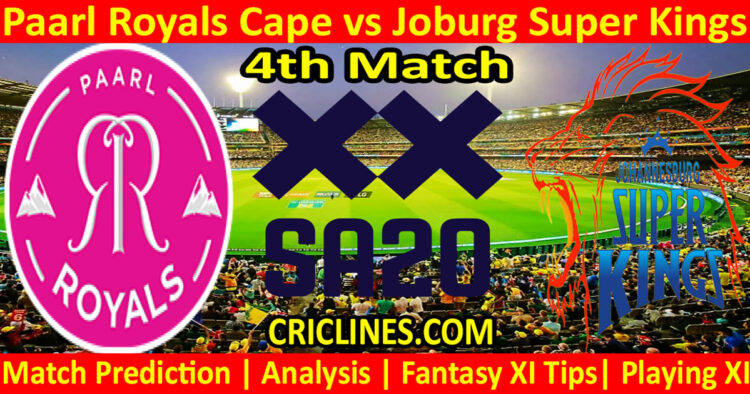 The world is ready to witness yet another big battle of the SA20 T20 League 2023. The 4th match of the South Africa T20 League 2023 is scheduled to play between Paarl Royals Cape and Joburg Super Kings on Friday, 13th January 2023 at Boland Park, Paarl. We are posting safe, accurate, and 100% secure today match prediction of SA20 T20 2023 with live SA20 scores and ball by ball updates with prediction.

Paarl Royals failed to have a good start to South Africa T20 League and lost their very first match against MI Cape Town by a handsome margin. We think that they will make some changes in the final playing eleven of this match and will play with full force to open the account on the ladder.

Joburg Super Kings had an interesting match against Durban Super Giants where they won with a margin of 16 runs. They will also test their bench strength in this match and we think that they will give a tough time to Paarl Royals.

Paarl Royals have a strong batting order in their squad but could manage to score just 142 runs in 20 overs. David Miller and Jos Buttler spent much time on the pitch but failed to put some big runs on the board. Jos Buttler proved the highest run-scorer with 52 runs to his name on 42 balls with the help of six boundaries and one huge six. The skipper, David Miller put some runs on the board but he faced a lot of deliveries. He scored 42 runs on 31 balls.

Wihan Lubbe, Eoin Morgan, and Dane Vilas are other boatsmen in the squad of this team but these batsmen were not good in the previous match. We are hoping that these batsmen will play a main role in the next matches. Bjorn Fortuin and Tabraiz Shamsi are the leading bowlers of this team with Frisco Adams, Ramon Simmonds, and Codi Yusuf. Ramon Simmonds and Codi Yusuf picked one wicket each while Bjorn Fortuin, Frisco Adams, and Tabraiz Shamsi were the bowlers who failed to pick any wicket.

The top batting order of Joburg Super Kings totally failed to give the best performance and their four key batsmen went back to the pavilion on a total of just 27 runs. Donavon Ferreira, Faf du Plessis, and Romario Shepherd performed well and scored a total of 190 runs in 20 overs. Donavon Ferreira was the most successful and highest run-scorer from their side with 82 runs in his account. He faced 40 balls and smashed eight boundaries and five huge sixes. Romario Shepherd also had an outstanding performance with the bat. He scored 40 runs on just 20 balls and smashed two boundaries and four huge sixes.

The skipper, Faf du Plessis also performed well with the bat and continued his good form. He scored a total of 39 runs on 33 balls. He smashed three boundaries during his inning. The bowling unit of Joburg Super Kings was not much impressive in the previous match but they defended the target of 191 runs and leaked 174 runs in 20 overs. Alzarri Joseph was the most successful and highest run-scorer from their side with two wickets to his name in four overs while he was charged for 30 runs. Malusi Siboto, Donavon Ferreira, and Aaron Phangiso picked one wicket each. George Garton, Reeza Hendricks, and Romario Shepherd were the bowlers who failed to pick any wicket in the previous match. Faf du Plessis is a good leader and we think that he will use the sources of this team in a proper way.

Joburg Super Kings is overall a strong team when we compare it with Paarl Royals Cape. They have the best players of the t20 format of cricket. The batting order of this team is also strong and some well-known hitters of the t20 format are part of the squad of this team, so the winning chances of today’s match for Joburg Super Kings have been increased. The equation of who will win today’s cricket match prediction and who will win the cricket match today is mentioned as under.

The 4th match of SA20 T20, 2023 is going to be held at Boland Park, Paarl. We had observed in the previous matches played here that the pitch here at this venue is good for batting in early overs. The track has a good amount of pace and bounce which allow the batsmen for the good cricketing shorts but this groung also have big boundaries which can be a plus point for the bowlers. A score of 190 plus seems to be a par score.

The weather forecast for Paarl is good this cricket match. There are almost no chances of rain in the region and we are hopeful that we will have a full match to enjoy.

Donavon Ferreira, Faf du Plessis, and Alzarri Joseph are key players to watch in this match.

Dream11 fantasy team lineup prediction for Paarl Royals Cape vs Joburg Super Kings 4th Match SA20 2023. After checking the latest player’s availability, which players will be part of both teams, and the possible tactics that the two teams might use as we had learned from previous seasons of SA20 T20 League to make the best possible Dream11 team.

We had provided you with the above-mentioned SA20 prediction on the basis of our research, understanding, and analysis. These prediction tips have also been based on the reports that we have from our different sources. You can consider the point we had provided you and the final decision will be yours.