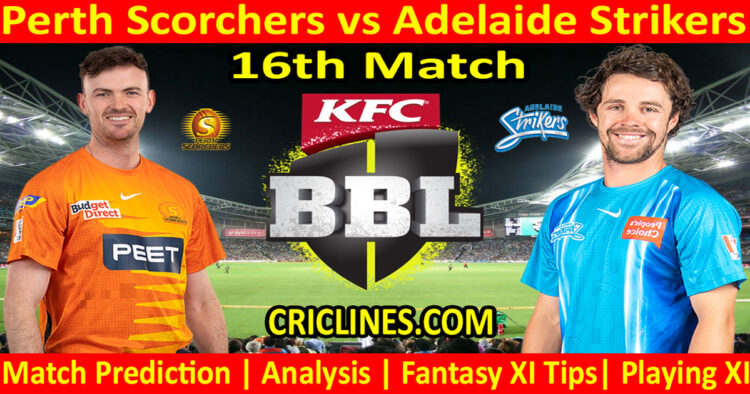 The world is ready to witness yet another big battle of BBL T20. The 16th match of Big Bash League 2022-23 is scheduled to play between Perth Scorchers and Adelaide Strikers on Monday, 26th December 2022 at Perth Stadium, Perth. We are posting safe, accurate, and secure today match prediction of BBL T20.

The defending champion had performed well in the previous matches of this edition of the Big Bash League. Perth Scorchers had played three matches and had won two out there. They had lost just one match and are holding the third position on the points table. The Scorchers had beaten Sydney Sixers and Melbourne Stars but lost their match against Hobart Hurricanes.

Perth Scorchers had performed well in the early matches of this edition of the Big Bash League. They don’t have any big stars but are doing well. They had added Faf du Plessis to their squad and he had been good. He had scored runs in almost each and every match and provided a good start. He had scored a half-century and his strike rate had been just superb. Aaron Hardie is another batsman who had given all-rounding performance in this tournament. He picked two wickets and also scored 97 runs. Josh Inglis had also performed well in this tournament and scored 149 runs including two half-centuries.

Some big batsmen in the squad of Perth Scorchers like Adam Lyth, Nick Hobson, and Ashton Turner had not been good in this tournament. The bowling unit of Perth Scorchers also had been good. Jhye Richardson had picked eight wickets in three matches Jason Behrendorff had picked six and Andrew Tye had picked five wickets in three matches. Now they are going to face the Strikers in this match at their home venue. We are sure that they will perform well and but Adelaide Strikers is not a weak side and they have to put full force to find them on the winning side. Perth Scorchers is full of young and energetic players and we are hoping for an interesting match.

Adelaide Strikers won three matches in a row under the leadership of Chris Lynn but lost the previous match against Brisbane Heat after a close contest. The bowling department of the Strikers had been shining in this tournament in the previous matches. We know that they send ten batsmen of a team, Sydney Thunder that has a strong batting order on a total of just 15 runs which is the lowest record total by any team in the history of the Big Bash League. Henry Thornton is the leading wicket-taker of this tournament who had picked 12 wickets till now. Wes Agar had picked seven wickets while Chris Lynn and Matthew Short had been good with the bat.

Colin de Grandhomme and Rashid Khan had proven the best all-rounder from the side of the Strikers. Alex Carey and Travis Head had joined the team which had added some extra strength in the squad of this team. The performance of their bowling unit was not much impressive and they leaked 166 runs in 20 overs. Matthew Short and Wes Agar picked three wickets each while the skipper, Peter Siddle could manage to pick two wickets in four overs but he leaked a lot of runs. He was charged with 45 runs in four overs. Rashid Khan and de Grandhomme failed to pick any wicket. The batting order of the Strikers performed well but failed to chase the target of 167 runs and scored 160 runs in 20 overs. Thomas Kelly was the highest run-scorer with 43 runs to his name while Colin de Grandhomme scored 37 runs.

Matthew Short, H Thornton, and Faf du Plessis are key players to watch in this match.

The 16th match of Big Bash League 2022-23 is going to be held at Perth Stadium, Perth. We had observed in the previous matches played here that the pitch here at this venue is good for batting. The track is slower than the others we have seen and helps the spinners quite a bit. We are hoping that the surface is bound to get slower and be a bit more difficult for batting in this match. A score of 185 is going to be tough to chase.