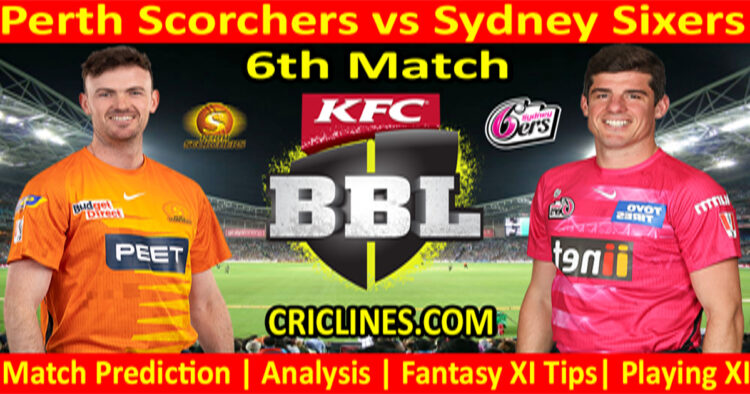 The cricket fans are ready to witness yet another big battle of BBL T20. The 6th match of Big Bash League 2022-23 is scheduled to play between Perth Scorchers and Sydney Sixers on Saturday, 17th December 2022 at Perth Stadium, Perth. We are posting safe, accurate, and secure today match prediction of BBL T20.

The defending champion Perth Scorchers are going to play their very first match of this edition of the Big Bash League against the runner-up team of the previous edition of BBL T20, Sydney Sixers at their home ground. They were the best-performing team when the league matches were completed. They played 14 league matches with 11 wins to their name. They lost just three matches and were leading the points table. They beat the same team, Sydney Sixes in the qualifier match and made their way to the final where they beat Sydney Sixers once again.

Sydney Sixers failed to have a kick start to this tournament and lost their very first match against Adelaide Strikers by a big margin. Now they are going to face a strong team where they should give an extraordinary performance to open their account on the ladder.

Perth Scorchers had also made some major changes in their squad for this tournament. Mitchell Marsh was leading the Scorchers in the previous edition of the Big Bash League but now they had appointed Ashton Turner as their new leader. He is an experienced player and played a lot of matches in BBL. He also played 13 T20I matches and scored 108 runs. He also played some matches in IPL. The batting order of this team is very strong. Nick Hobson, Faf du Plessis, and Adam Lyth will be handling the top batting order of this team. Cameron Bancroft, Josh Inglis, and Stephen Eskinazi are wicketkeeper batsmen in the squad of this team. Josh Inglis had played nine T20 Internationals for Australia.

Perth Scorchers are also rich in the bowling unit. They had picked some best bowlers of the T20 format of cricket. Jason Behrendorff is the leading bowler of this team. He had played in eight T20 matches for Australia with seven wickets to his name. He also picked five wickets in five matches in IPL. Aaron Hardie is another experienced bowler in their squad. Tymal Mills is a good bowler of T20 cricket from England. He had 12 wickets for England and 11 wickets in IPL. Jhye Richardson and Andrew Tye are other bowlers in their squad. Andrew Tye had played 31 T20 matches and picked 47 wickets. He also played 30 matches in IPL where he picked 42 wickets. Aaron Hardie, Peter Hatzoglou, Matthew Kelly, and Hamish Mckenzie are other bowlers in the squad of Scorchers.

Sydney Sixers came to their very first match as a clear favorite team against Adelaide Strikers but lost the match by a big margin of 51 runs. They lost the toss and were asked to field first. They have a strong bowling unit but totally failed to give the best performance in the previous match and leaked 184 runs in 20 overs. Sean Abbott was the most successful and highest wicket-taker from their side with three wickets to his name in four overs against 37 runs. Izharulhaq Naveed also performed well and picked two wickets in four overs while he was charged for 25 runs. Steve OKeefe was the other bowler with a wicket to his name. He picked one wicket while he leaked 27 runs in four overs. Hayden Kerr and Ben Dwarshuis were the bowlers who failed to pick any wicket in the previous match.

The batting order of Sydney Sixers also failed to give the best performance as many of us were expecting. They failed to chase a big target on the board and score just 133 runs while chasing the target of 185 runs. Jordan Silk was the highest run-scorer from their side with 36 runs to his name on 25 balls with the help of five boundaries. Josh Philippe was the other batsman who put some runs on the board. He scored 26 runs while he faced 23 balls and smashed two boundaries during his inning. The skipper, Moises Henriques was the other batter with some runs to his name. He scored 24 runs on 29 balls and smashed just one boundary. Daniel Christian and Hayden Kerr scored 13 runs each. James Vince and Seam Abbott were the batsmen who failed to open the account on the scoreboard while Kurtis Patterson could manage to score just nine runs.

Sean Abbott, Faf du Plessis, and Adam Lyth are key players to watch in this match.

The 6th match of Big Bash League 2022-23 is going to be held at Perth Stadium, Perth. We had observed in the previous matches played here that the pitch here at this venue is good for batting. The track is slower than the others we have seen and helps the spinners quite a bit. We are hoping that the surface is bound to get slower and be a bit more difficult for batting in this match. A score of 185 is going to be tough to chase.