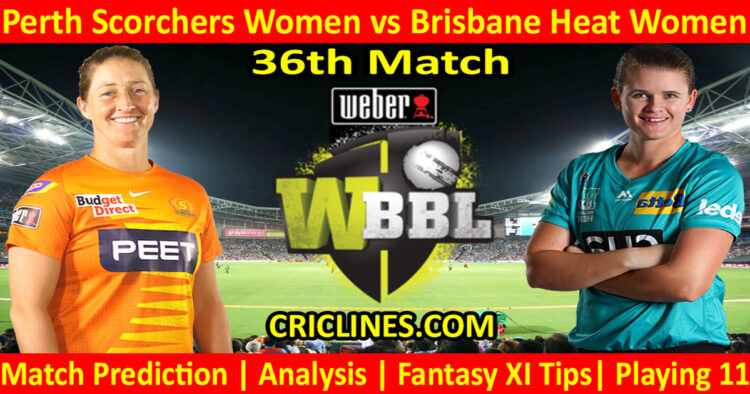 The world is ready to witness yet another big battle of the Women’s Big Bash League. The 36th match of WBBL T20 is scheduled to play between Perth Scorchers Women and Brisbane Heat Women on Wednesday, 9th November 2022 at Lilac Hill Park, Perth. We are posting safe, accurate, and 100% secure today match prediction of WBBL T20.

Perth Scorchers Women had been good in this tournament till now. They had played a total of nine matches with three wins to their name. They had lost three matches while their one match was washed out by the rain. They are holding the fourth position on the points table right now. Remember that Perth Scorchers Women won three early matches in a row but lost the next three matches. They have to give the best performance in the remaining matches to get some chances to reach the playoff.

Brisbane Heat Women is the other team that performed well in this tournament. They had won six out of nine matches played so far. They had lost three matches and are holding the third position on the points table. Brisbane Heat Women had won the previous two matches in a row. Their most recent win came against Hobart Hurricanes Women.

Perth Scorchers Women were beaten by Adelaide Strikers Women in their most recent match by a big margin of seven wickets. They won the toss and decided to bat first. The performance of their batting order was not much impressive. They could manage to score just 119 runs in 20 overs. The skipper, S Devine was the highest run-scorer from their side scoring 37 runs on 33 balls with the help of six boundaries. Maddy Green was the other batter who put some runs on the board. She scored 36 runs while she faced 37 balls and smashed four boundaries during her inning. M Carmichael scored 20 runs while Piepa Cleary remained not out after scoring 12 runs. We have no doubt that the batting order of Perth Scorchers Women is strong but they had failed to give the best performance in some previous matches.

The bowling unit of Perth Scorchers Women is also strong and experienced and they were good in some early matches but they lost momentum and failed to give the best performance in the most recent match. They failed to defend a low target on the board and leaked the target of 120 runs in just 16 overs. Piepa Cleary was the highest wicket-taker from their side but she leaked a lot of runs. She picked two wickets while she was charged for 29 runs in three overs. The skipper, Sophie Devine also had a wicket to her name. She picked one wicket in two overs while she was charged for 12 runs. No other bowler from their side could manage to pick any wicket. Alana King, Taneale Peschel, Marizanne Kapp, and Lilly Mills were the bowlers who failed to pick any wicket in the previous match. We are sure that the bowling unit of Perth Scorchers Women can give a tough time to other teams.

Brisbane Heat Women will be confident for this match as they won their most recent match against Hobart Hurricanes Women with a handsome margin of four wickets. They won the toss and decided to field first. The performance of their bowling unit was not much impressive. They leaked 164 runs in 20 overs. Nicola Hancock was the most successful and highest wicket-taker from their side who picked four wickets in her four overs against 32 runs. Amelia Kerr also had an outstanding performance and had a wicket to her name. She picked one wicket in four overs while she was charged with 24 runs. Pooja Vastrakar and the skipper, Jess Jonassen also picked one wicket each.

Courtney Sippel and Charli Knott were the bowlers who failed to pick any wicket in the previous match. Brisbane Heat Women won the most recent match due to the best and most outstanding performance by their batting order. They chased the target of 165 runs in 19.4 overs. Laura Harris was the most successful and highest run-scorer from their side who remained not out after scoring 68 runs on just 29 balls with the help of nine boundaries and three huge sixes. Amelia Kerr was the other batter who put some runs on the board. She scored 41 runs while she faced 33 balls and smashed three boundaries and one huge six during her inning. Georgia Voll scored 17 runs while Georgia Redmayne scored 16 runs.

Brisbane Heat Women is full of experienced and young players in the t20 format. The batting order of this team is also strong and some well-known hitters of the t20 format are part of the squad of this team, so the winning chances of today’s match for Brisbane Heat Women have been increased. The equation of who will win today’s cricket match prediction and who will win the cricket match today is mentioned as under.

The 36th Match of the Women’s Big Bash League is going to be held at Lilac Hill Park, Perth. We had observed in the previous matches played here that the pitch here at this venue is good for batting. The track is slower than the others we have seen and helps the spinners quite a bit. We are hoping that the surface is bound to get slower and be a bit more difficult for batting in this match. A score of 160 is going to be tough to chase.

Dream11 fantasy team lineup prediction for Perth Scorchers Women vs Brisbane Heat Women 36th Match WBBL 2022. After checking the latest player’s availability, which players will be part of both teams, and the possible tactics that the two teams might use as we had learned from previous seasons of Women’s Big Bash League to make the best possible Dream11 team.