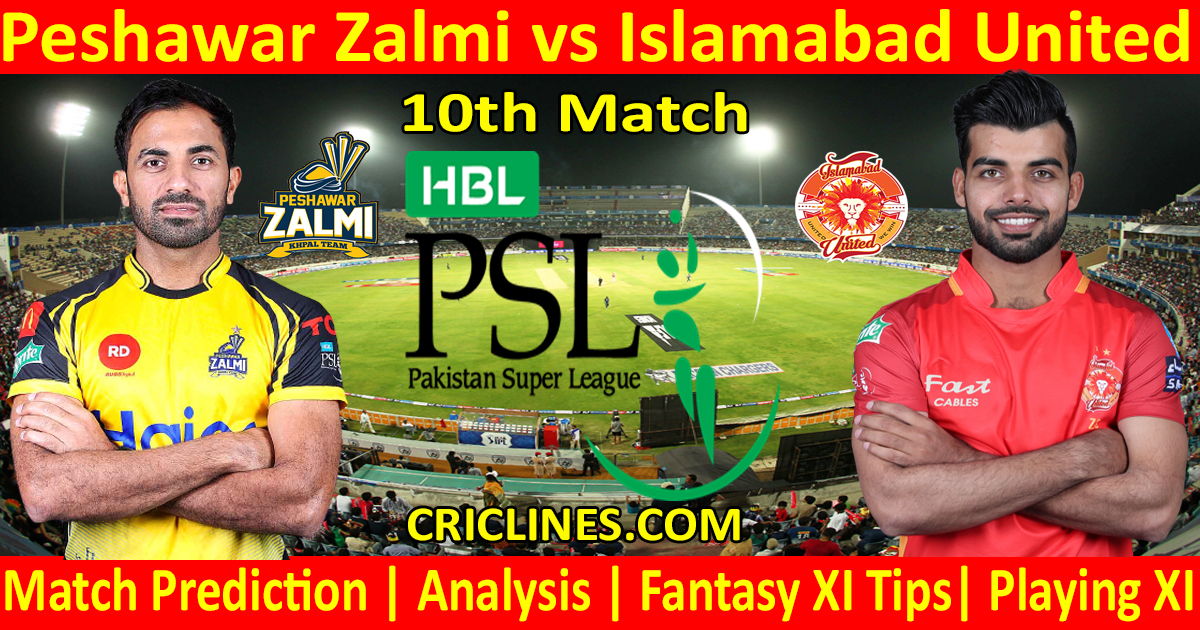 The world is ready to witness yet another big battle of PSL T20. The 10th Match of Pakistan Super League 2021 is scheduled to play between Peshawar Zalmi and Islamabad United on Saturday, 27th February 2021 at National Stadium, Karachi. We are posting safe, accurate, and secure today match prediction for all matches of PSL free.

Peshawar Zalmi had registered their second win in this season of PSL after beating Quetta Gladiators with a margin of three wickets after chasing 41 runs in the last three overs. Thanks to Sherfane Rutherford who hit four sixes at a crucial time. Skipper, Wahab Riaz also hit two longest sixes in the previous match. The pitch was like a nightmare for the bowlers of both teams. A score of near about 200 was scored in both innings of the previous match. Saqib Mahmood was the highest wicket-taker from the Zalmi side who picked three wickets while Wahab Riaz had two wickets to his name. He leaked 54 runs in his four overs bowled out. Mohammad Imran picked one wicket while Mujeeb and Mohammad Irfan failed to pick any wicket.

The batting order of Peshawar Zalmi had given the best performance in the previous match. Except for Kamran Akmal and Tom Kohler-Cadmore, almost all batsmen of Zalmi put some runs on the board. Haider Ali scored his fifty on 28 deliveries with the help of five boundaries and two sixes. Shoaib Malik smashed the inning of 36 runs on 20 balls while Imam-ul-Haq had 41 runs to his name. Sherfane Rutherford scored 36 runs on just 18 deliveries while the skipper, Wahab Riaz scored 20 runs on just eight balls. The batting order of Zalmi is back to the action and now, it is up to the bowling department to restricting the opposition on the low total.

Islamabad United started their campaign to this season six of the Pakistan Super League in an outstanding way. Two wins in two matches had put this team on the top of the points table. We observed the bowling unit of the United struggling in the previous match. They failed to pick any wicket till the 18th over in their most recent match against Karachi Kings even a total of eight bowlers were used by the skipper, Shadab Khan. Hasan Ali and Hussain Talat picked one wicket each in the last two overs. Faheem Ashraf, Mohammad Wasim Jr, Zafar Gohar, Lewis Gregory, Iftikhar Ahmed, and the skipper, Shadab Khan failed to pick any wicket.

The batting order of Islamabad United give their best performance in the previous match against Karachi Kings and every batsman took his part. They chased the target of 197 runs even after losing their two key wickets on a total of just 13 runs. Alex Hales the momentum for the United and other batsmen continued that momentum till the chase. He smashed the inning of 46 runs in no time. He faced just 21 deliveries and smashed eight boundaries and one-six. Iftikhar Ahmed put 49 runs on the board while he faced 37 runs balls. Hussain Talat and Faheem Ashraf batted with patience in the middle overs and continued scoring the runs. Asif Ali smashed the inning of 21 runs on just nine balls and put Islamabad United over the line.

The 10th Match of Pakistan Super League season 2021 is scheduled to be held at National Stadium, Karachi. The pitch here at this venue is flat good for batting as there is no bounce and pace. Outfield on this venue is very fast and the ball will travel to the boundary very quickly. It also has a lot of help for the spin bowlers but almost all teams in this tournament have a strong batting order so this does not matter. According to the cricket match prediction 100 sure, a total of 180 runs should be a par score.