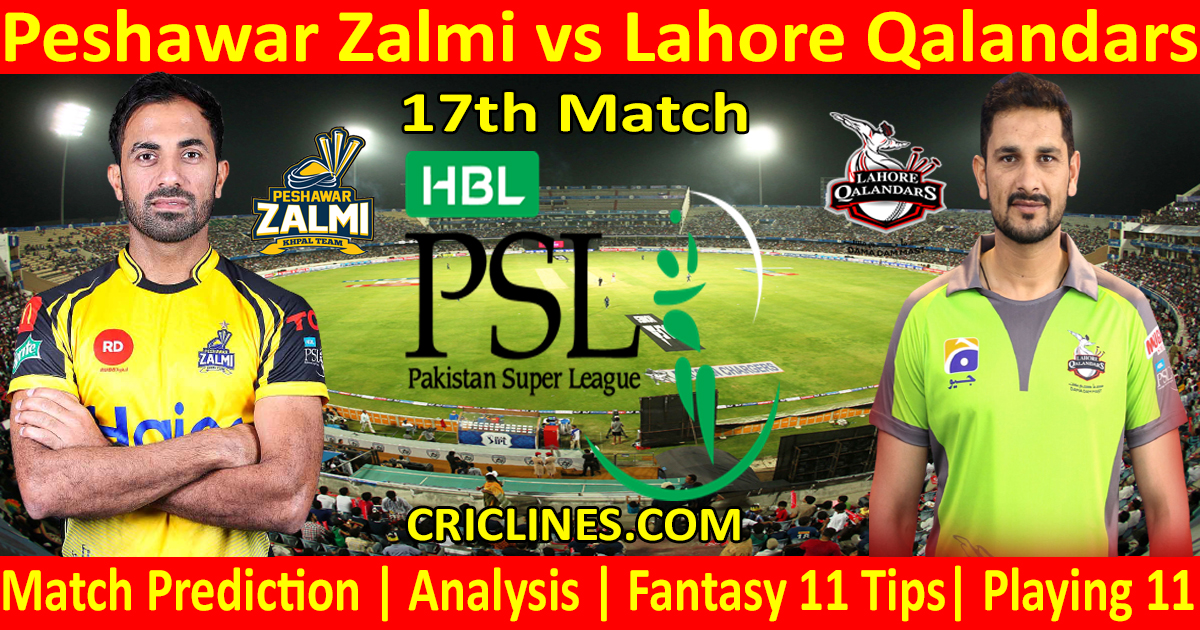 The cricket fans are ready to witness yet another big battle of PSL T20. The 17th Match of Pakistan Super League 2021 is scheduled to play between Peshawar Zalmi and Lahore Qalandars on Thursday, 10th June 2021 at Sheikh Zayed Stadium, Abu Dhabi. We are posting safe, accurate, and secure today match prediction for all matches of PSL free.

Peshawar Zalmi is going to play its first match in Abu Dhabi. They had played five matches with three wins to their name in the first leg of PSL in Pakistan. They had lost two matches and are holding the 3rd position on the points table. Peshawar Zalmi had lost some key players for this second half of PSL in Abu Dhabi but also have some match-winners in the side. Ravi Bopara, Wahab Riaz, and Shoaib Malik are the players who have the ability to change the game at any stage. Kamran Akmal, Haider Ali, and Mujeeb Ur Rahman are available to handle the middle order.

Kamran Akmal is known as one of the most successful batsmen in the Pakistan Super League. He had been opening the batting inning for the Zalmi and had been good in power play. Haider Ali is a rising star of Pakistan cricket who is known as a hard hitter. If he sets in a couple of overs and starts hitting, no one can stop him from scoring the runs. We are not sure that David Miller will available or not. If he is available for the selection, the batting order of Zalmi can be more dangerous.

Lahore Qalandars had won the first match played in Abu Dhabi against Islamabad United. Now, they had played five matches with four wins to their name overall. They had lost just one match and are leading the points table of PSL 6 right now. Lahore Qalandars had been good when it comes to the batting department. Almost all batsmen from their side had performed well and had put some runs on the board. Fakhar Zaman had scored runs in all matches and had given a good start to the follow-up batsmen. Mohammad Hafeez is the other experienced batsman who had played a lot of t20 cricket and also had given his best performance in the previous matches of this tournament. Ben Dunk was not scoring runs in some previous matches but he smashed the inning of 57 runs on just 43 deliveries. David Wiese and Joe Denly are also available for run-scoring for Qalandars in the middle and last overs.

This season of the PSL had proved a nightmare for the bowlers of all teams. Even the score near about 200 had been chased in this tournament. The bowling department of Lahore Qalandars also had been underperforming like all other teams. Shaheen Afridi had given the early breakthrough in almost all matches but other bowlers had failed to stop the batters from run-scoring. Haris Rauf had failed to give his performance as many of us were expecting. Mohammad Hafeez had filled the place of the spin bowler but he also had failed to pick wickets. Ahmed Daniyal also had performed average in bowling. David Wiese and Samit Patel also had failed to give the best performance in this tournament so far.

The toss had played a key role in the decision of all previously played matches of Pakistan Super League season six. We had seen in the previous editions of this tournament that chase is the best option for both teams at the venue of Abu Dhabi. According to our toss prediction, the team who will win the toss may choose to field first.

The 17th Match of Pakistan Super League season 2021 is scheduled to be held at Sheikh Zayed Stadium, Abu Dhabi. The pitch here at this venue is flat good for batting as there is no bounce and pace. Out-field on this venue is very fast and the ball will travel to the boundary very quickly. It also has a lot of help for the spin bowlers but almost all teams in this tournament have a strong batting order so this does not matter. According to the live cricket score, a total of 180 runs should be as a par score.