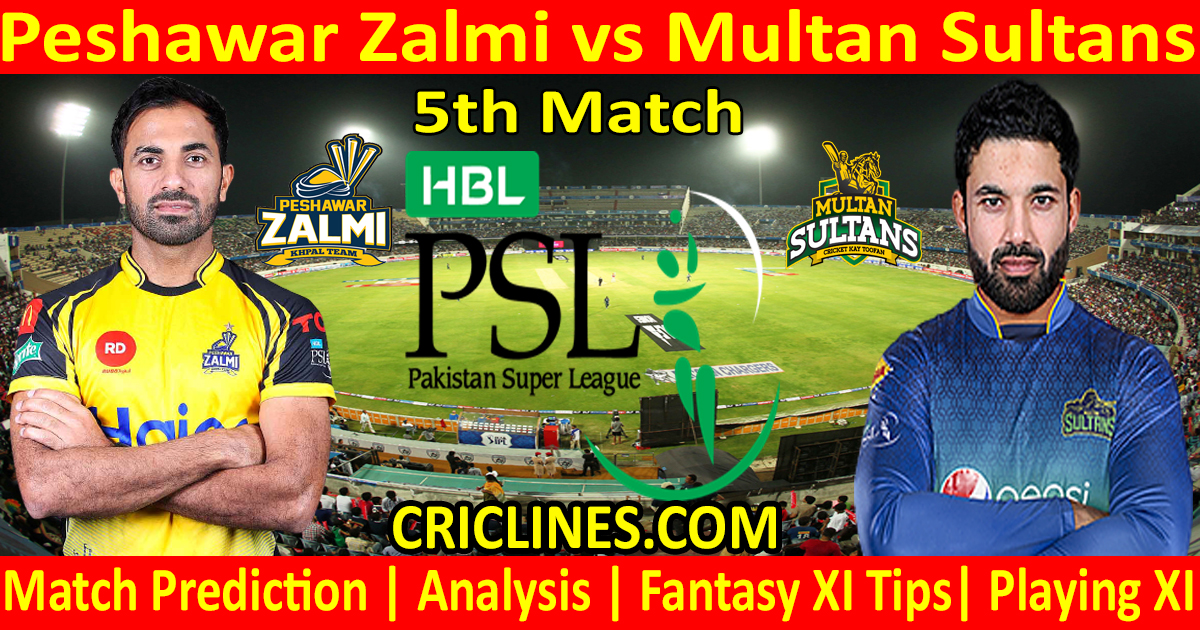 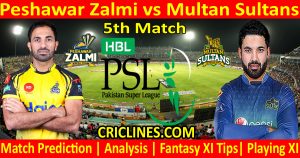 The cricket fans are ready to witness yet another big battle of PSL T20. The 5th Match of Pakistan Super League 2021 is scheduled to play between Peshawar Zalmi and Multan Sultans on Tuesday, 23rd February 2021 at National Stadium, Karachi. We are posting safe, accurate, and secure today match prediction for all matches of PSL free.

Peshawar Zalmi failed to have a kick start to this season of Pakistan Super League and was beaten by Lahore Qalandars in their very first match by the margin of four wickets. The batting order of Zalmi almost collapsed in the first match. Except for Ravi Bopara, no batsmen from their side could put some big runs on the board. Their key top-order batsmen like Imam-ul-Haq and Haidar Ali failed to open the account on the scoreboard and were out on a golden duck. Kamran Akmal, who the highest run-scorer in the history of PSL, could manage to score just five runs. Shoaib Malik showed some strength and scored 26 runs. Sherfane Rutherford also scored 26 runs. There is no doubt that the batting order of the Zalmi is strong and experienced and now, they have to prove it. Haider Ali, Shoaib Malik, Kamran Akmal, and Imam ul Haq had to play a key role to improve the batting of Zalmi.

Like the batting, the bowling department of Peshawar Zalmi is also strong and experienced and they also proved this in the first match of this tournament. The skipper, Wahab Riaz, and Saqib Mahmood picked two wickets each while Mujeeb Ur Rahman and Mujeeb Ur Rahman picked one wicket each. The skipper, Wahab Riaz gave a chance after breaking the biosecure bubble. The bowling unit of Peshawar Zalmi is also strong and experienced. Wahab Riaz has the ability to pick the wickets early in the power play. Saqib Mahmood also proved himself in the first match. Mujeeb Ur Rahman can be beneficial on the pitch in Karachi. If the batting order of Zalmi put a total of 160 plus on the board, the bowling unit of this team has the ability to defend it.

Multan Sultans lost the opening match of this tournament against Islamabad United. That was a match that Sultans could easily win but a couple of drop catches and some miss fielding were the reasons behind their loss. The batting order of Multan Sultans showed its strength in the first match. The skipper, Mohammad Rizwan continued his good form in this match and scored 71 runs. Carlos Brathwaite also showed some power hitting but no other batsmen performed well. Chris Lynn scored just one run while Shahid Afridi was bowled out on a duck. Rilee Rossouw scored 25 runs while James Vince had 16 runs to his name. Sohaib Maqsood and Khushdil Shah also failed to perform well.

The bowling department of Multan Sultans performed well in the previous match but due to some drop catches, misfielding and leakage of 19 runs in the 2nd last over of their inning, they failed to defend the target of 150 runs. Usman Qadir and Imran Tahir were not part of the playing eleven. Carlos Brathwaite and Shahid Afridi picked two wickets each while Mohammad Umar and Khushdil Shah picked one wicket each. Sohaibullah and Sohail Tanveer failed to pick any wicket. Sohail Tanveer was charged for 38 runs in four overs.

The toss is going to play a key role in the decision of all matches of the Pakistan Super League. We had seen in the previous editions of this tournament that chase is the best option for both teams at the venue of Karachi. Almost 75% of matches had been won by the bowling first. According to our toss prediction, the team that will win the toss may choose to field first.

The 5th Match of Pakistan Super League season 2021 is scheduled to be held at National Stadium, Karachi. The pitch here at this venue is flat good for batting as there is no bounce and pace. Outfield on this venue is very fast and the ball will travel to the boundary very quickly. It also has a lot of help for the spin bowlers but almost all teams in this tournament have a strong batting order so this does not matter. As per the live cricket score, a total of 180 runs should be a par score.