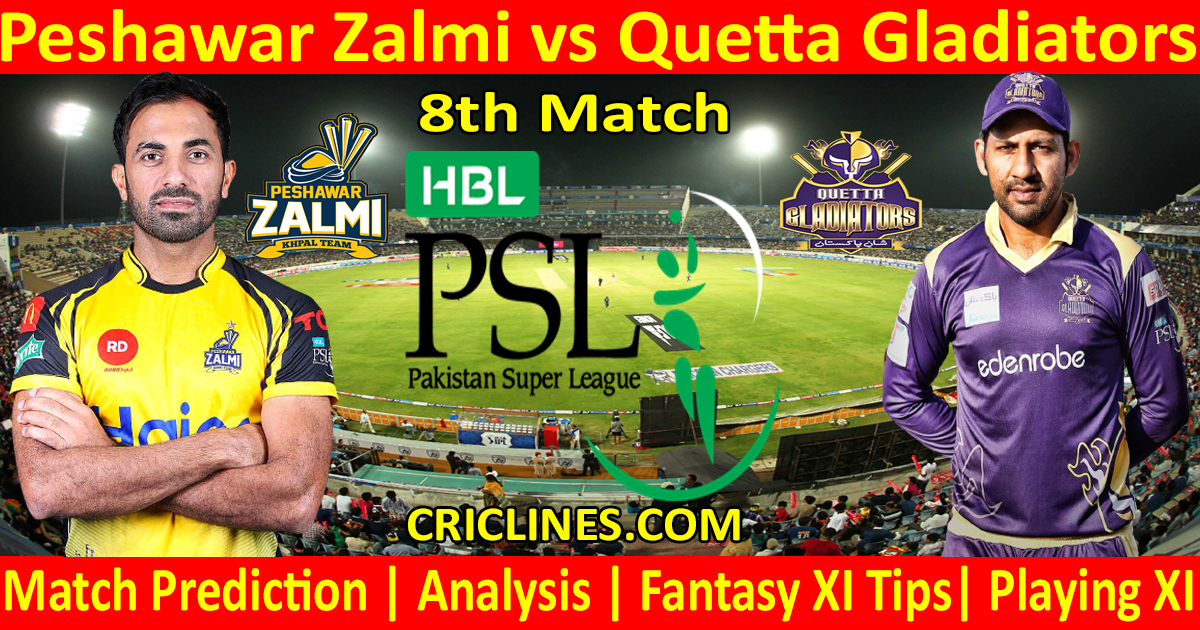 The world is ready to witness yet another big battle of PSL T20. The 8th Match of Pakistan Super League 2021 is scheduled to play between Peshawar Zalmi and Quetta Gladiators on Friday, 26th February 2021 at National Stadium, Karachi. We are posting safe, accurate, and secure today match prediction for all matches of PSL free.

Peshawar Zalmi settled early after losing the opening match of this season of the Pakistan Super League and beaten the Multan Sultans with a handsome margin of six wickets after chasing the target of 194 runs. We observed that the bowling unit of Zalmi was struggling in the previous match against Sultans. Saqib Mahmood remained the highest wicket-taker with two wickets to his name against 36 runs in four overs. Mohammad Imran had a good start and picked the wicket of Chris Lynn early in the 2nd over of the inning but he was charged for 41 runs in four overs. Mohammad Imran was all good with the ball. Mujeeb once again failed to give his best performance while the skipper, Wahab Riaz is also not performing well as we had seen so far.

The batting order of Peshawar Zalmi is strong and they proved this in the previous match. To chase the target of 194 is never easy but Sherfane Rutherford, Shoaib Malik, Haider Ali, and Tom Kohler-Cadmore made this possible. The turning point of this match was the wicket of Imam ul Haq. We are not un-fair to him but we think that he dost not belongs to the high quality of t20 cricket. He comes to open the batting order while he is very poor when it comes to the strick rate. He scored 48 runs on 39 balls. This is not enough when you are chasing a huge total on the board. 24 runs of Haidar Ali on just eight deliveries played a key role in the win of Zalmi. Tom Kohler-Cadmore put 53 runs on the board on just 32 balls.

Two losses in two matches had put Quetta Gladiators at the bottom of the points table of PSL 6. They had played with just three overseas players in both matches while they have a lot of quality players available for selection. We think that they will change the routine in this match. Faf du Plessis, Naseem Shah, Cameron Delport, and Dale Steyn can get a chance to be selected for this match. The current batting order of the Gladiators is not strong overall. Chris Gayle had performed well in both previously played matches and we are not sure that he will be available for this match. The skipper, Sarfraz Ahmad scored 40 runs and showed that he is now able to score in the middle over.

Tom Banton and Saim Ayub had been struggling in both matches. This is the time to perform if they want to be part of the playing eleven. Ben Cutting is known as a hard hitter but he had failed to adjust himself to the conditions. The bowling unit of Quetta Gladiators looked weak in both previous matches and we also observed some captain-level mistakes. Mohammad Nawaz leaked just eight runs in two overs bowled out while he was not given another over. On the other side, Usman Shinwari was given four overs while he was leaking the runs continuously. Ben Cutting, Zahid Mehmood, and Anwar Ali had also struggled while Mohammad Hasnain is the only bowler who had performed well from the side of Quetta Gladiators.

The 8th Match of Pakistan Super League season 2021 is scheduled to be held at National Stadium, Karachi. The pitch here at this venue is flat good for batting as there is no bounce and pace. Outfield on this venue is very fast and the ball will travel to the boundary very quickly. It also has a lot of help for the spin bowlers but almost all teams in this tournament have a strong batting order so this does not matter. According to the live cricket score, a total of 180 runs should be a par score.