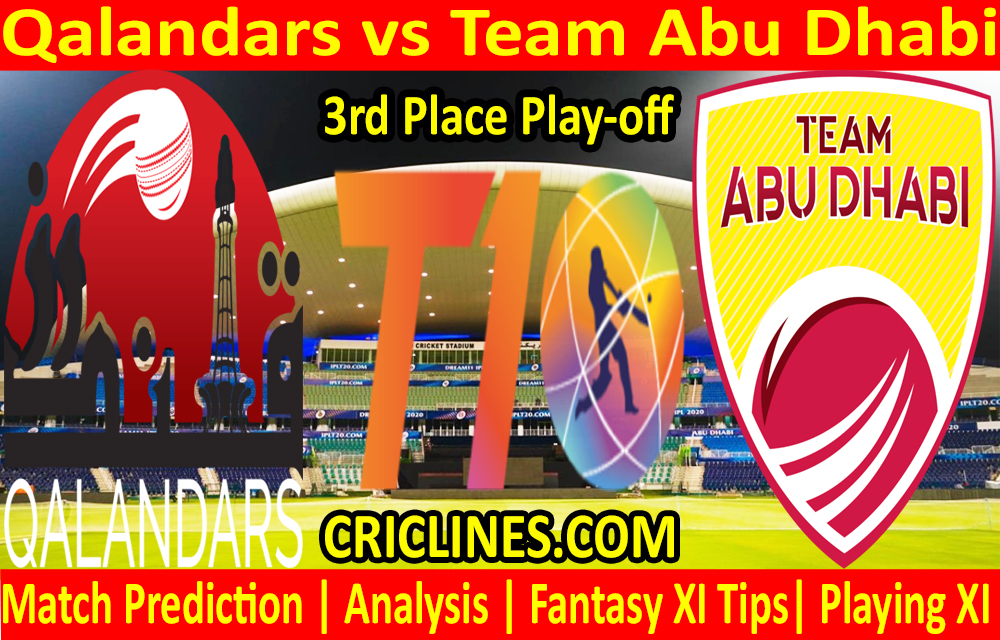 The cricket fans are ready to witness yet another big battle of the T10 League. The 3rd Place Play-off match of the T10 League is scheduled to play between Qalandars and Team Abu Dhabi on Saturday, 6th February 2021 at Sheikh Zayed Stadium, Abu Dhabi. We are posting safe, accurate, and secure today match prediction for all matches of Abu Dhabi T10 League free.

Qalandars had performed well in this tournament so far. They won five matches in a row but lost the most recent match. Now, they had played a total of six matches with five wins to their name. They had lost one match and are holding the 3rd position on the points table after the end of the league stage matches. They had lost their most recent match against Delhi Bulls by a huge margin of nine wickets. The performance of their batting order was good in that match. They scored 107 runs in their inning of 10 overs but their bowling unit almost failed to give their best performance. They failed to defend the target of 108 runs and leaked this target in 7.2 overs.

Team Abu Dhabi failed to give their best performance in this season of the T10 League. They lost some early matches but got their momentum back and won three matches in a row. They also had played a total of six matches with three wins and the same losses. They are holding 4th position on the points table after the end of the league stage matches. They had beaten Bangla Tigers in their previous match by the margin of 21 runs. The performance of their batting order was good in that match. They scored a total of 116 runs in their 10 overs inning while their bowling unit also had an outstanding performance and defended the target of 117 runs. They leaked 95 runs in their inning of 10 overs.

The 3rd Place Play-off match of the T10 League is going to be played at Sheikh Zayed Stadium, Abu Dhabi. This venue has one of the flattest and completely dead tracks we have seen in the past. We are expecting a slow, flat, and good batting surface for this match. As per the live cricket score, a total of more than 130 runs should be a par score.

The dream11 team prediction for Qalandars vs Team Abu Dhabi 3rd Place Play-off match T10 League. After checking the latest players’ availability, which players will be part of both teams, the possible tactics that the two teams might use as we had learned from previous seasons of T10 League to make the best possible Dream11 team.