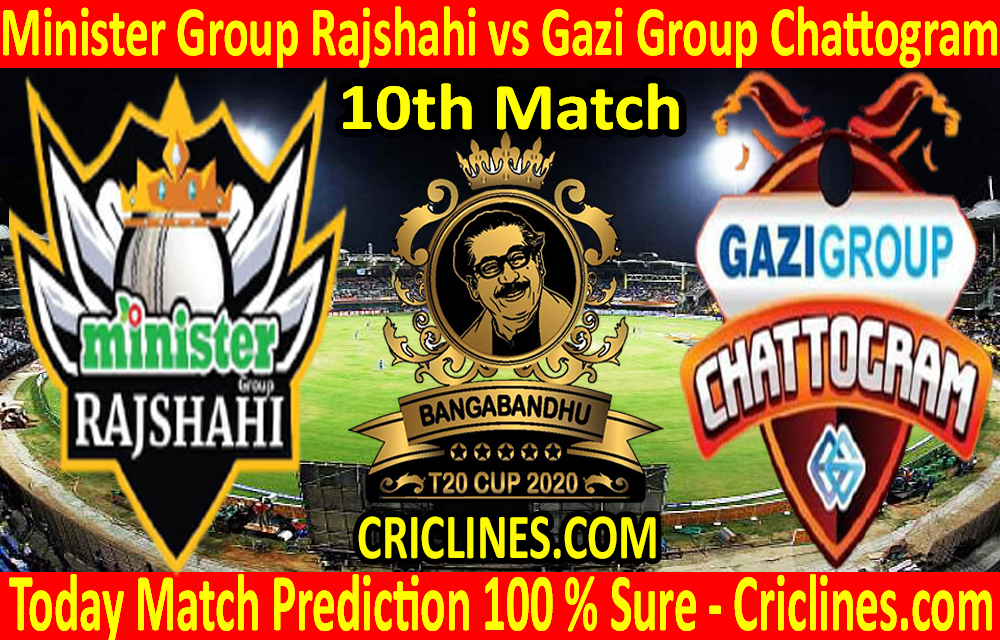 The world is ready to witness yet another big battle of the B T20 Cup. The 10th Match match of Bangabandhu T20 Cup 2020 is scheduled to play between Gazi Group Chattogram and Minister Group Rajshahi on Wednesday, 2nd December 2020 at Shere Bangla National Stadium, Dhaka. We are posting safe, accurate, and secure today match prediction for all matches of Bangabandhu T20 Cup 2020 free.

Minister Group Rajshahi had performed well in this season of the Bangabandhu T20 Cup. They had played a total of three matches with two wins to their name. They had lost one match and are holding the 2nd position on the points table. They are coming to this match on the back of a massive win over Gemcon Khulna in their most recent match with a handsome margin of six wickets. They lost the toss and were asked to field first. The performance of their bowling unit was good in that match. They leaked 146 runs in their inning of 20 overs. Mukidul Islam was the highest wicket-taker from their side but he leaked plenty of runs. he was charged for 44 runs in his four overs bowled out.

Ibadat Hossain, Mahedi Hasan, and Arafat Sunny picked one wicket each in the previous match while F Reza and Anisul Islam Emon were the bowlers who failed to pick any wicket in that match. The performance of the batting order of Rajshahi was also good in the previous match. They chased the target of 147 runs in 17.1 overs. The skipper, Najmul Hossain Shanto was the most successful and highest run-scorer from their side who scored 55(34) runs with the help of six boundaries and three huge sixes. Rony Talukdar scored 26 runs while Mohammad Ashraful remained not out after scoring 25 runs. Fazle Mahmud scored 24 runs.

The way how Gazi Group Chattogram had performed in this tournament is just outstanding. They had won all three matches played so far and are leading the points table right now. They had won their most recent match against Beximco Dhaka with a handsome margin of nine wickets. They won the toss and decided to field first. The way how their bowling unit performed in that match was just outstanding. They leaked just 88 runs in their inning of 20 overs. Almost all bowlers from their side performed well in that match. Shariful Islam was the most successful bowler from their side who picked two wickets in his two overs bowled out while he was charged for just 10 runs.

Mustafizur, Mosaddek Hossain, and Taijul Islam also performed well with the ball in the previous match and picked one wicket each in that match. Nahidul Islam and Soumya Sarkar picked one wicket each. The performance of the batting order of the Chattogram was also outstanding in the previous match. They chased the target of 89 runs in just 10.5 overs. Soumya Sarkar was the most successful and highest run-scorer from their side who remained not out after scoring 44(29) runs with the help of four boundaries and two sixes. Liton Das scored 34 runs and Mominul Haque remained not out after scoring eight runs.

The 10th Match of Bangabandhu T20 Cup season 2020 is scheduled to be held at Shere Bangla National Stadium, Dhaka. The pitch here at this venue is good for batting. It also has a lot of help for the spin bowlers. A total of 180 runs should be a par score.