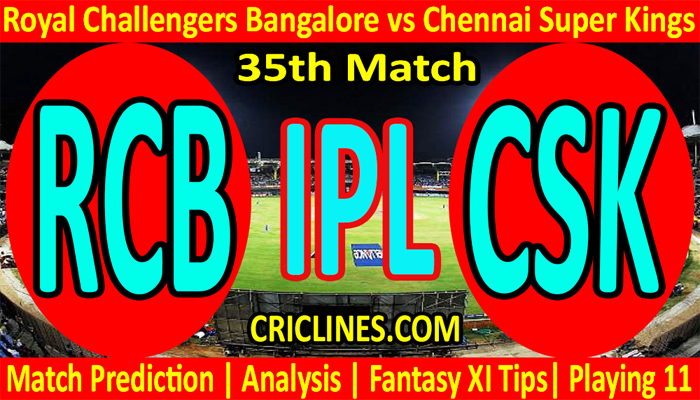 The world is ready to witness yet another big battle of the IPL T20. The 35th Match of the Indian Premier League is scheduled to play between Royal Challengers Bangalore and Chennai Super Kings on Friday, 24th September 2021 at Sharjah Cricket Stadium, Sharjah. We are posting safe, accurate, and 100% secure today match prediction for all matches of IPL T20 free.

Royal Challengers Bangalore were in the super from when this tournament was paused. Many of us were expecting the same performance in the second half but we had a different game. RCB had a heavy loss in terms of the remaining overs in their previous match against KKR. On the other hand, Chennai Super Kings had a brilliant start to this second leg of IPL with a smashing win over the defending champion, Mumbai Indians even after having a poor start in batting. We are expecting an interesting match between Kohli eleven and Dhoni eleven.

We have no doubt that the batting order of Royal Challengers Bangalore is strong and experienced. Wanindu Hasaranga, Kyle Jamieson, AB de Villiers, and Glenn Maxwell are available to handle the batting order of this team. AB de Villiers has a decent record while playing at Sharjah. This ground has shorter boundaries and six-hitting on this venue is quite easy. The bowling unit of RCB is also strong and experienced. Mohammed Siraj, Kyle Jamieson, Wanindu Hasaranga, Yuzvendra Chahal, and Harshal Patel have to give their best performance in the next matches.

The top batting order of Chennai Super Kings almost collapsed early but they bounced back strongly and put a decent total on the board and we saw the same good performance by the bowling department of this team. Ambati Rayadu is injured and he will not be a part of the next matches. We are sure that this will not affect the batting order as key batters of CSK like Ravindra Jadeja, Dwayne Bravo, Faf du Plessis, and Moeen Ali are in good form. MS Dhoni and Suresh Raina are also available to handle the batting order in the middle and last overs.

MS Dhoni is an experienced captain and he knows how to use the bowlers smartly which we also observed in the previous match against Mumbai Indians. Deepak Chahar is the most successful bowler when comes to bowl in power play overs. Ravindra Jadeja, Meoeen Ali, Josh Hazelwood have also experienced bowlers of the T20 format. Dwayne Bravo was the highest wicket-taker from their side who picked three wickets in his four overs bowled out against just 25 runs. Deepak Chahar picked two wickets while Josh Hazlewood and Shardul Thakur picked one wicket each to their names while Moeen Ali and Ravindra Jadeja were the bowlers who failed to pick any wicket.

Royal Challengers Bangalore had won three out of five most recent matches played while Chennai Super Kings had won four out of five recently played matches.

The 35th Match of IPL T20, 2021 is going to be held at the Sharjah Cricket Stadium, Sharjah. We had observed in the previous matches played here that the pitch here at this venue is good for batting in early overs. We had seen a total score of near about 220 runs in the most recent three matches played here. The track has a good amount of pace and bounce which allows the batsmen for the good cricketing shorts but this ground also has big boundaries which can be a plus point for the bowlers. A score of 180 plus seems to be a par score.

Virat Kohli, Ruturaj Gaikwad, and AB de Villiers are the key players to watch in this match.

Dream11 fantasy team lineup prediction for Royal Challengers Bangalore vs Chennai Super Kings 35th Match IPL 2021. After checking the latest player’s availability, which players will be part of both teams, the possible tactics that the two teams might use as we had learned from previous seasons of the Indian Premier League to make the best possible Dream11 team.