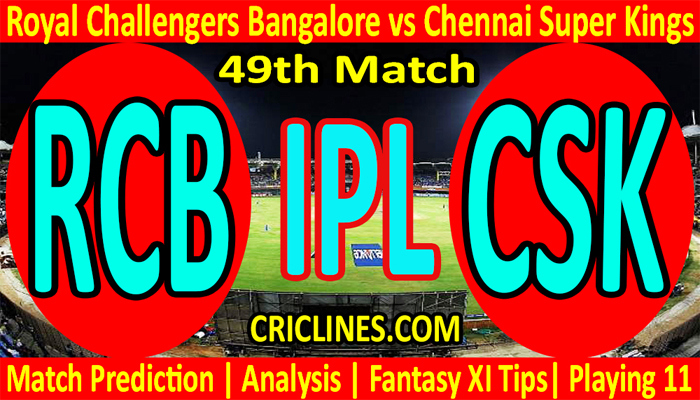 The cricket fans are ready to witness yet another big battle of the IPL 2022. The 49th match of the Indian Premier League 2022 is scheduled to play between Royal Challengers Bangalore and Chennai Super Kings on Wednesday, 4th May 2022 at Maharashtra Cricket Association Stadium, Pune. We are posting safe, accurate, and 100% secure today match prediction of IPL T20 2022 with live IPL score and ball by ball updates with prediction.

RCB had a good start to IPL 2022 but soon they lost the momentum and had lost the most recent three matches in a row. They had played a total of ten matches with five wins and the same losses. They are holding the fifth position on the points table. They had lost their most recent match against GT. They had some matches left and still have some chances to qualify for the playoff but for that, they need to give some extraordinary performance in upcoming matches. On the other side, CSK is the second-worst performing team in IPL 2022 right now. They had won just three out of nine matches played. They had lost six matches and are situated at the ninth position on the table. They had beaten SRH in the most recent match. Chennai had lost a lot of matches and we don’t think that they can qualify for the playoff. Many IPL prediction providers are going with RCB but our reports confirm that CSK is going to win this match.

Bangalore had been the unpredictable team in IPL 2022. In some matches, they were just outstanding with the batting and in some matches, they were good with the bowling. The batting order of RCB is strong and experienced and they were good in the previous match against Gujarat. Virat Kohli and Faf du Plessis are opening the batting inning for RCB. Rajat Patidar, Glenn Maxwell, Dinesh Karthik, Shahbaz Ahmed, and Lomror are handling the top and middle batting orders. They performed well in the previous match where they scored 170 runs in 20 overs. RCB had good news as they start batter, Virat Kohli is back to good form and he was the highest run-scorer in the previous match with 58 runs to his name in 53 balls with the help of five boundaries and one huge six. Rajat Patidar also performed well and scored 52 runs on just 32 balls and smashed five boundaries and two huge sixes during his inning. Glenn Maxwell scored 33 runs while Lomror had 18 runs to his name.

Faf du Plessis failed to open the account on the scoreboard while Shahbaz Ahmed and Dinesh Karthik scored just two runs each. RCB had a strong and experienced bowling department in the squad but they failed to give the best performance in the previous match. Glenn Maxwell, Mohammed Siraj, Josh Hazlewood, Shahbaz Ahmed, Harshal Patel, and Wanindu Hasaranga are leading the bowling department of RCB. They could not defend the target of 171 runs and leaked this target in 19.3 overs. Shahbaz Ahmed was the most successful bowler with two wickets to his name in three overs against 26 runs. Wanindu Hasaranga also picked two wickets in four overs while he was charged for 28 runs. Harshal Patel, Josh Hazlewood, Mohammed Siraj, and Glenn Maxwell were the bowlers who could not pick any wicket. The current playing eleven of Bangalore is an ideal team and we don’t think that the management of RCB needs to make any changes in the final playing eleven of this match.

MS Dhoni took the charge of CSK and it seems that the luck of this team is also back. They won the previous match against SRH. They also have good news as their key batter, Ruturaj Gaikwad is back in the good form. We think that CSK is back on the winning track and they will give a tough time to the opponents in the next matches. The batting order of Chennai had an outstanding performance in the most recent match where they scored 202 runs in 20 overs. Devon Conway is the other batter who is back in form. Conway and Ruturaj Gaikwad had a partnership of 182 runs for the first wicket. This is a good sign for CSK and they will sure to continue this good form in upcoming matches. Ruturaj Gaikwad was just one run away from scoring the century as he could manage to score 99 runs on 57 balls with the help of six boundaries and the same huge sixes. Devon Conway remained not out after scoring 85 runs on 55 balls and smashed eight boundaries and four huge sixes during his inning.

The middle batting order of CSK is strong which is led by Ambati Rayadu, Dwaine Pretorius, MS Dhoni, and Robin Uthappa. Santner and Jadeja are also available to handle the lower batting order even though Shivam Dube is the batter who can bat well in the last overs. The big problem for CSK is the bowling department. The start bowlers of Chennai had struggled with the right line and length in IPL 2022. The most recent match against SRH is a big example of it where they leaked 189 runs while defending the target of 203 runs. Mukesh Choudhary, Simarjeet Singh, Mitchell Santner, Mahesh Theekshana, Ravindra Jadeja, and Dwaine Pretorius are leading the bowling department of CSK. Mukesh Choudhary was the highest wicket-taker with four wickets to his name but he leaked a lot of runs. He was charged for 46 runs in four overs. Mitchell Santner and Dwaine Pretorius picked one wicket each while Simarjeet Singh, Ravindra Jadeja, and Mahesh Theekshana could not pick any wicket. We think that the wickets are getting slower in IPL 2022 which is a good sign for the bowlers of CSK. We are sure that CSK is back to good form and the next matches will be very exciting.

RCB had faced CSK in 29 matches where they had won nine matches while Chennai had won 20 matches.

Royal Challengers Bangalore had won two out of the most recent five matches they had played while Chennai Super Kings had won two matches out of five recently played matches.

Royal Challengers Bangalore is overall a strong team when we compare it with Chennai Super Kings. They have the best players in the t20 format of cricket. The batting order of this team is also strong and some well-known hitters of the t20 format are part of the squad of this team, so the winning chances of today’s match for Royal Challengers Bangalore have been increased. The equation of who will win today’s cricket match prediction and who will win the cricket match today is mentioned as under.

The 49th match of IPL T20, 2022 is going to be held at the Maharashtra Cricket Association Stadium, Pune. We had observed in the previous matches played here that the pitch here at this venue is good for batting in early overs. The track has a good amount of pace and bounce which allows the batsmen to the good cricketing shorts but this ground also have big boundaries which can be a plus point for the bowlers. A score of 190 plus seems to be a par score.

R Gaikwad, Glenn Maxwell, and Faf du Plessis are the key players to watch in this match.

Dream11 fantasy team lineup prediction for Royal Challengers Bangalore vs Chennai Super Kings 49th Match IPL 2022. After checking the latest player’s availability, which players will be part of both teams, the possible tactics that the two teams might use as we had learned from previous seasons of Indian Premier League to make the best possible Dream11 team.